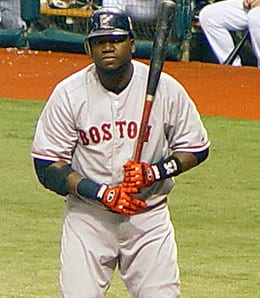 Sheesh…that didn’t take long, did it?

After a season-opening three-game set in which the hated Yankees took two of three from the Red Sox, BoSox fans are already calling for David Ortiz to be sat down.

Yes, he was just 1-for-11, getting an RBI single Wednesday night to drive in the only Boston run as the Sox dropped the rubber match to New York, 3-1 in 10 innings.

And yes, fans remember his absolutely brutal start last year in which he had one lousy home run through the first two months of the year.

But those same fans seem to forget what Big Papi did from that point on, namely lead the AL in dingers, tie for the lead in ribbies and rank third in slugging over the final four months of the season.

He’s being patient (4.58 P/PA) so far, so it’s not as if he’s up there flailing away and getting overmatched. It’s three freaking games…get a grip.

There’s a reason we ranked him as the top DH heading into the season — because in the end, he’s still going to put up his 30 long balls, drive in 100 runs and hit for a decent average.

So calls for the Sox to replace Ortiz with Mike Lowell are very premature. Papi deserves a chance to prove that last year’s ridiculously slow start was an aberration and that the dude who showed up from June to September is still very much a going concern.

In fact, I bet Ortiz starts heating up on the road trip that begins Friday night in Kansas City. The Royals’ pitching staff is off to a crappy start, ranking dead last in the AL in ERA, so that should jump start Boston’s offense. And then the Sox visit Minnesota, and its middling staff, a group that Ortiz has battered for a 1006 OPS over the past three seasons.

I’m confident that one week from now when the Sox come back home to face the Rays in a three-game set, Ortiz will have shut up his detractors and Sox fans will have found something else to moan about.

In the meantime, if the Papi owner in your league is the panicky type, now is your chance to take advantage and make him a low-ball offer.

By RotoRob
This entry was posted on Friday, April 9th, 2010 at 3:14 pm and is filed under BASEBALL, RotoRob. You can follow any responses to this entry through the RSS 2.0 feed. You can leave a response, or trackback from your own site.