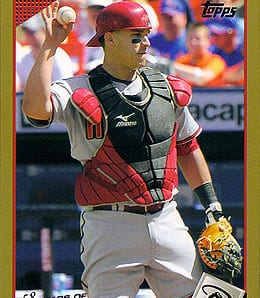 Miguel Montero emerged as an everyday catcher in the desert this season.

After giving the American League the once over, it’s time to turn our attention to the Senior Circuit.

In the National League this season there were some huge bargains in the pitching department. Not that the bats were all that shabby — with speed being available all over the place — but pitching was where it was at in the NL in 2009.

Without further ado, let’s give those National League players their due accolades.

Miguel Montero, Arizona Diamondbacks: The progression of Chris Snyder ended this season with the cumulative injuries and ineffectiveness, and Montero stepped it up from his back-up role and enjoyed a breakout campaign in 2009. The 26-year-old hit 16 homers with 59 RBI while posting a great .294 BA. I wonder if the BoSox are regretting not taking the opportunity to acquire Montero last offseason when the rumour mill had it he was available?

Adam LaRoche, Atlanta Braves: It was truly a bizarre year for LaRoche. He got out of the gate with a decent start, something unusual for him, and then forgot to show up in May. He righted the ship in June and then came an absolutely horrible July where he managed only two homers and a .169 BA, causing many an owner to abandon ship and justifiably so. LaRoche put up his usual solid finish, slugging 12 homers with 40 RBI and a great .325 BA over the final two months. At the end of the day he put together a typical “Adam LaRoche” season with 25 homers, 83 RBI and a .277 BA, but you better have had a “Plan B” for first base during those dry spells.

Clint Barmes, Colorado Rockies: Barmes enjoyed a career year in 2009, mashing 23 long balls with 76 RBI. He was also drafted in only 20 per cent of all Yahoo! leagues entering the campaign. This shouldn’t be a huge surprise as he had hit only 30 homers in his career up until this season and Ian Stewart was chasing him for playing time in the middle infield. For those that added “Deer Meat Boy” early, the rewards were huge.

Everth Cabrera, San Diego Padres: It was a solid year for the 22-year-old as he managed two homers, 31 RBI, 25 thefts and a .255 BA in 377 at-bats batting out of the lead-off slot for the Padres. Cabrera finished third among NL shortstops in stolen bases despite playing in just a little over half the games. Looking down the road, that 703 OPS and those 80 strikeouts are definitely going to need some work if he wants to continue setting the table for the Padres in 2010.

Juan Uribe, San Francisco Giants: The stars were aligned correctly for Uribe in 2009. He was enjoying a typical “Juan Uribe” sort of year, bouncing all over the infield, and then came September. Down the stretch, he was a monster. Uribe hit eight homers, drove in 23, scored 17 runs and chipped in with an unheard, at least by his standards .325 BA in September. He was a huge bonus for those that plucked him from the wire, but do remember that the odds are very long that we will see a repeat of this incredible run anytime in the future.

Chris Coghlan, Florida Marlins: Coghlan was recalled at the beginning of May to provide some spark to the Marlins lineup, and spark it he did. He managed nine homers, 47 RBI, 84 runs scored, and eight thefts to go along with a stellar .321 BA in 504 ABs. Coghlan showed tremendous poise as a 24-year-old rookie batting at the top of the lineup, finishing sixth in the NL in hitting. Now, if the Marlins move incumbent Dan Uggla this offseason and Coghlan can return to his natural position at second base, his value will only increase heading into 2010.

Nyjer Morgan, Washington Nationals: Despite his season ending prematurely at the end of August due to the fractured left hand, Morgan was a definite plus in the speed department for many a Fantasy squad. In 469 ABs, he managed 42 thefts and a superb .321 BA and appears to have the lead-off slot sewn up for the Nationals entering 2010. Traded from the Pirates to the Nationals at the end of June, Morgan seemed to really like the change of scenery, scorching the ball to the tune of a .351 BA with 24 stolen bases in July and August.

Carlos Gonzalez, Colorado Rockies: Commencing in mid-August, Gonzalez went on a tear for the Rockies. He slugged six homers in a span of eight days followed up by a September in which he swatted five more long balls and tossed in seven thefts. The 24-year-old is starting to demonstrated why he was coveted so highly in the deal that sent Matt Holliday to the Oakland A’s.

Cody Ross, Florida Marlins: Sure, he was streaky and struck out 122 times, but for a power bat that was drafted in virtually no leagues this year, Ross was a definite asset. He finished up the 2009 campaign with 24 homers, 90 RBI and a .270 BA. Those numbers were good enough for Top 10 honours in both dingers and RBI among NL outfielders and made him a perfect fourth or fifth outfielder for your Fantasy squad in 2009.

Andrew McCutchen, Pittsburgh Pirates: The future has arrived in the Steel City and his name is Andrew McCutchen. The 23-year-old was called up at the beginning of June and didn’t disappoint. Over the balance of the season he hit 12 homers, drove in 54, scored 74 runs, stole 22 bags, and managed a solid .286 BA in 433 at-bats. McCutchen quickly claimed the lead-off role as his own and with that five-category potential, his value is rising rapidly looking down the road to 2010.

Matt Diaz, Atlanta Braves: He could always hit southpaws, but this year — especially in August — he was hitting everything in sight. In August, Diaz clouted six homers, drove in 18 runs and put up a staggering .404 BA. For those that took the plunge early on in August and grabbed him off the wire, the rewards were plentiful.

Randy Wolf, Los Angeles Dodgers: The Dodger southpaw has come full circle and just in time as he’ll be a free agent this offseason. In 214 1/3 IP, Wolf allowed only 178 hits and 58 walks, while striking out 160, which accounts for that great 3.23 ERA and 1.10 WHIP. Now if the normally strong Dodger pen had only given him some support he might have managed more than just 11 wins. Finally healthy, Wolf posted a season very reminiscent of that stellar 2002, so he will be highly sought after this winter.

Kevin Correia, San Diego Padres: The 29-year-old former Giant quietly enjoyed a very solid season for the Padres, but does anyone lately enjoy anything other than quiet seasons in San Diego? Correia put up a dozen wins, a 3.91 ERA, a 1.30 WHIP, and 142 strikeouts in 198 IP, and was a great addition as a fourth or fifth starter in all formats.

Jorge De La Rosa, Colorado Rockies: Let’s take a quick look back to the beginning of June. At the time, De La Rosa was 0-6 with a 5.44 ERA. Fast forward to season’s end and we find him with a 16-9 record, a 4.38 ERA, a 1.38 WHIP and 193 strikeouts in 185 IP. He didn’t win his first game until June 5, but once he got that under his belt he just didn’t stop. De La Rosa finished the season third in wins behind only St. Louis’ stellar one-two of Chris Carpenter and Adam Wainwright, and tied for eighth in strikeouts. De La Rosa was a Wire Troll stud in 2009 and a huge factor in the Rockies earning the NL Wild Card slot.

Homer Bailey, Cincinnati Reds: The seventh overall pick in the 2004 draft struggled early on, but found a groove down the stretch with six wins in his final nine starts. During that stretch, he struck out 53 in 58 1/3 IP while allowing only 11 earned runs. Is this a temporary aberration or he is finally figuring it out at the ripe old age of 23? Pitchers named “Homer” do cause me some concern, but this late-season surge is going to make Bailey an intriguing prospect heading into 2010 league drafts.

Bronson Arroyo, Cincinnati Reds: Arroyo finished the 2009 season with his best numbers since his first full season as a Red back in 2006. He managed a 3.84 ERA, a 1.27 WHIP and 127 strikeouts in 220 1/3 IP and was very strong over the final two months. Commencing in August, Arroyo pitched at least seven innings in each start through to the end of the year and allowed two or less earned runs in every start except one over that span. He was a horse down the stretch for both the Reds and your Fantasy team.

J.A. Happ, Philadelphia Phillies: At the end of May, the 26-year-old southpaw emerged from a successful stint in the Phillie bullpen, and never looked back. He authored a great rookie campaign with 12 wins, a 2.93 ERA, a 1.23 WHIP and 119 strikeouts in 199 IP. One trick ponies do cause me some concern, with Chuck James from the Braves immediately coming to mind, but you can’t argue with Happ’s results in 2009.

Joel Pineiro, St. Louis Cardinals: One has to have a very good memory to remember the last time Pineiro posted numbers reminiscent of his 2009 campaign. In 214, he racked up 15 wins and a 3.49 ERA, allowing a scant 27 free passes. I don’t believe anyone could have foreseen this huge turnaround, but those that gambled on the wire — especially in 4X4 formats — reaped the rather large rewards.

Randy Wells, Chicago Cubs: In a year of disappointment and turmoil in Chicago, Wells provided at least some respite from the day-to-day tribulations of being a Cub fan. The 27-year-old righthander moved into the rotation at the beginning of May and showed remarkable poise in posting 12 wins, a 3.05 ERA, a 1.28 WHIP and 104 strikeouts in 165 1/3 IP. Wells should garner some justified Rookie of the Year votes when the hardware is awarded in November.

Ryan Franklin, St. Louis Cardinals: Looking back to last spring, Franklin was slotted in as part of a closer-by-committee with Jason Motte and Chris Perez. Motte struggled early, Franklin stepped up his game, claimed the job, and the rest is history. Franklin compiled 38 saves to go along with a stellar 1.92 ERA and 1.20 WHIP and was a huge bonus in the saves category for those that gambled early on the wire.

Leo Nunez, Florida Marlins: The former Royal took over when Matt Lindstrom hit the DL with elbow woes at the end of June, and despite some struggles, Nunez held the job over the balance of the season. From September 8-22 he reeled off a string of six consecutive saves, and that were undoubtedly a difference maker in many a Fantasy league. Nunez ended up with 26 saves and has to be considered the front-runner for the closer role for the Fish heading into 2010.

By Tim McLeod
Tags: National League
This entry was posted on Wednesday, October 21st, 2009 at 12:08 am and is filed under BASEBALL, The Wire Troll, Tim McLeod. You can follow any responses to this entry through the RSS 2.0 feed. Both comments and pings are currently closed.