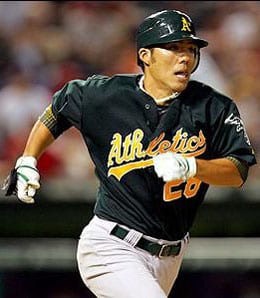 Those of you who ran to the wire quick enough to snag Kurt Suzuki definitely reaped the rewards.

Another regular season is over, so it’s time to take a look back at some of the waiver wire highlights of the 2009 campaign. In this, our second annual waiver wire review, we will highlight some of those prudent acquisitions that were the difference makers for many a Fantasy squad this season. Without further ado, let’s take a look at the American League, to be followed up by the Senior Circuit next week.

Kurt Suzuki, Oakland Athletics: Suzuki finished the 2009 campaign with 15 homers, 88 RBI, 74 runs scored, eight thefts and a decent .274 BA. He managed to finish up fourth in RBI and third in runs scored at his position. Not too shabby for a player that was drafted in a scant five per cent of all Yahoo! leagues this spring. It certainly gives cause for one to wonder if investing in a catcher early as a draft strategy is a prudent one.

Kendry Morales, Los Angeles Angels: When the Angels and Mark Teixeira parted company in the offseason, it created a huge hole offensively for the Angels. Six months, 34 homers and 108 RBI later, Morales has Angel fans now asking “Mark who?”

Aaron Hill, Toronto Blue Jays: Going all the way back to that first Wire Troll of the season pay dirt was hit, and in a huge way. How many of us would have bet that Hill would be the top producer at a position dominated by perennial all-star Chase Utley? A season of 36 homers, 108 RBI, 103 runs scored, six thefts and .286 BA have deservedly vaulted Hill to the top of the charts at second base. He is going to be a very interesting selection come league drafts in 2010.

Ben Zobrist, Tampa Bay Rays: The injury to Aki Iwamura opened the door and Zobrist was off and running. Those eight long balls he crushed in the month of June were absolutely huge. Although Zobrist cooled off considerably down the stretch, he still finished the year with 27 homers, 91 RBI, a .297 BA and 17 thefts. Anyone who says that platoon players can’t make a difference obviously didn’t gamble on Zobrist this season.

Alberto Callaspo, Kansas City Royals: Think back to those league drafts in March…wasn’t all the talk coming out of Kansas City centred around Mark Teahen making the switch to second base? So much for the best laid plans of mice and men. Callaspo enjoyed a fine year at the keystone corner, finishing up with 11 homers, 73 RBI and a .300 BA. If he can learn to play some defense, he could be looking at a long run in the middle infield for the Royals.

Jason Bartlett, Tampa Bay Rays: Bartlett was available in 96 per cent of all leagues playing at Yahoo! after this Spring’s drafts. He missed three weeks with a sprained ankle at the end of May and still managed career highs in every offensive category in 2009 with 14 long balls, 66 RBI, 90 runs scored and 30 thefts to go along with a superb .320 BA. Toss in Matt Garza, and that trade for Delmon Young is looking like a total steal for the Rays at this stage of the game.

Marco Scutaro, Toronto Blue Jays: Scutaro leapt into the upper echelon of shortstops in 2009 and despite his season ending prematurely on September 20 due to a torn right heel injury, he was one of only five shortstops in the game to reach the magic 100 runs scored plateau. Batting in the lead-off role for the Jays, he also managed 12 homers, 60 RBI, a solid .282 BA and 14 thefts. Not too shabby coming from a career platoon player acquired from the Athletics for a pair of minor league pitchers — one of the few solid moves made during the J. P. Ricciardi regime.

Erick Aybar, Los Angeles Angels: This season, the 25-year-old finally started showing off some of that great potential we’ve been hearing about seemingly forever. Aybar managed five homers, 58 RBI, 14 thefts and a great .312 BA out — a huge bonus given that many considered shortstop to be a potential area of concern for the Halos heading into the 2009 campaign. He was valued so low by Fantasy owners this Spring he wasn’t even listed as a drafted player in Yahoo! leagues.

Gordon Beckham, Chicago White Sox: The 23-year-old got the call back at the beginning of June and after a rather inauspicious 4-for-35 start, Beckham turned up his game and in 367 at-bats managed to slug 14 long balls, drive in 63 runs, and toss in seven thefts for good measure. Chicago’s first round pick in 2008 has not disappointed and you can look forward to big numbers from Beckham in 2010.

Adam Kennedy, Oakland Athletics: I don’t think anyone can lay claim to seeing this one coming. Kennedy managed to hit more homers this year than in his previous four seasons combined. He slugged 11 dingers, drove in 63, and added 20 stolen bases, to boot. Toss in the second base eligibility and Kennedy was a definite difference maker in 2009.

Jason Kubel, Minnesota Twins: The potential has always been there but, unfortunately, the health hasn’t. Kubel finally managed to stay healthy and enjoyed a superb season, mashing 27 homers and driving in 102 runs while managing to hit an even .300. Those teams that gambled on Kubel were handsomely rewarded in 2009.

Michael Cuddyer, Minnesota Twins: Coming off an abysmal injury-filled 2008 campaign in which he hit only three homers with 36 RBI, this year Cuddyer arguably enjoyed his best season since way back in 2006. The injury to Justin Morneau required a move to first base and Cuddyer responded in fine fashion, leading the Twins with 10 homers and 29 RBI over the final five weeks of the season. Fantasy teams that added Cuddyer around mid-August were undoubtedly ecstatic with the results.

Rajai Davis, Oakland Athletics: The speedy Davis defied all odds this season and with his stellar play literally forced his way into the lineup and never looked back. Three homers, 48 RBI, and those 41 stolen bases in only 390 at-bats were absolutely huge for those Fantasy squads taking a run at the stolen base title in league play. If you project those stolen base numbers over a full season you have a player that’s stock has risen, and should continue to rise heading into the 2010 season.

Marlon Byrd, Texas Rangers: Byrd was the “Rodney Dangerfield” of Fantasy baseball in 2009. He enjoyed a great season and was still getting very little respect heading into the final week of the season, being owned in less than half the leagues playing over at CBS. Those 20 homers, 89 RBI, and solid .283 BA made Byrd a solid option as a fifth outfielder this season. A Byrd on your active roster was worth way more than a Burrell on the bench.

Franklin Gutierrez, Seattle Mariners: The 26-year-old Gutierrez looks to finally have found a home patrolling centrefield for the Mariners. The change of scenery has done nothing but good for his game as he managed to hit 18 big flies, drive in 70, and score 85 runs with a solid .283 BA. Gutierrez also chipped in 16 thefts and contributed his usual stellar defence. You’ve got to love five-category waiver wire additions. He has finally enjoyed that breakout campaign I’ve been anticipating for the past several seasons and I expect more of the same moving in 2010.

Brett Anderson, Oakland Athletics: The 21-year-old southpaw has emerged as a solid Rookie of the Year candidate in 2009. For a horrible Oakland team he managed to win 11 games with 150 strikeouts and a solid 4.06 ERA and 1.28 WHIP in 175 1/3 IP. The future is looking very bright for the young southpaw and he is going to be a very intriguing pick come next year’s drafts.

Edwin Jackson, Detroit Tigers: Jackson emerged as a solid workhorse in the Tiger rotation. Those 13 wins and 161 strikeouts in 214 IP made the 26-year-old a huge asset as a third or fourth pitcher on many Fantasy teams this season.

Ricky Romero, Toronto Blue Jays: The Jays needed someone to step up this year with the departure of A.J. Burnett and injuries to Dustin McGowan, Shaun Marcum and Jesse Litsch , and Romero was the man for the Jays. Although he tired a bit down the stretch, the 24-year-old southpaw managed 13 wins and a 4.30 ERA with 141 strikeouts in 178 IP. The walks were been high and are certainly cause for some concern, but for a guy literally forced into the Jay rotation, he enjoyed a very solid rookie campaign.

Scott Feldman, Texas Rangers: Quick — name the last pitcher to win at least 17 games for the Rangers and the year he did it.* Feldman enjoyed a solid breakout campaign for the Rangers in 2009, and should be a fine middle-of-the-rotation innings eater going forward. With the addition of Nolan Ryan to the front office, have the Rangers finally figured out they need more than just that high-powered offense to win the division?

David Aardsma, Seattle Mariners: This past season, the waiver wire was again crucial in determining the final outcome in the saves category. Aardsma is a perfect example of why drafting closers in the early rounds is a mistake. Penciled into a set-up role for the Mariners heading into the 2009 campaign, he stepped into the closer job in the wake of the failure of Brandon Morrow and never looked back. In 71 1/3 IP, Aardsma managed 38 saves, 80 strikeouts, a 2.52 ERA and 1.16 WHIP and was a definite difference maker for many a Fantasy squad in 2009.

Andrew Bailey, Oakland Athletics: Undrafted in all formats and starting the season behind both Brad Ziegler and Joey Devine on the depth charts, Bailey jumped out of the gate strong and after a brief duel with Ziegler, he claimed the closer gig and never surrendered it. Bailey racked up 26 saves and 91 strikeouts in 83 1/3 IP and was one of the few bright spots on an otherwise dismal Athletics’ team.

J.P. Howell, Tampa Bay Rays: The 26-year-old southpaw managed to fill the shoes of Troy Percival, who shut it down for the year at the end of May with shoulder tendonitis. Howell put up 17 saves and 79 strikeouts in 66 2/3 IP with his usual great 2.84 ERA and 1.20 WHIP. A very high workload over the past several seasons led the Rays to shut him down early for the balance of the season, but expect the hard tossing lefty to emerge as an integral component of the Tampa Bay bullpen in 2010.

By Tim McLeod
Tags: Kurt Suzuki, Oakland Athletics
This entry was posted on Saturday, October 10th, 2009 at 9:11 am and is filed under BASEBALL, The Wire Troll, Tim McLeod. You can follow any responses to this entry through the RSS 2.0 feed. Both comments and pings are currently closed.