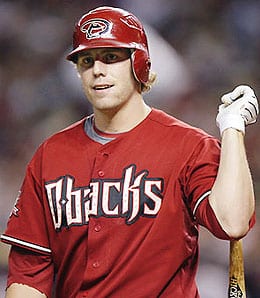 Mark Reynolds was a rare bright spot on a very disappointing 2009 Diamondback squad.

Since getting swept in the 2007 NLCS, the Arizona Diamondbacks have slipped significantly each season, plummeting to the basement of the NL West this season.

Led by Mark Reynolds and Justin Upton, the team had plenty of power, but a tremendously weak bullpen forced the team to work its starters hard. And while Dan Haren and Doug Davis in particular proved to be workhorses, there was just not enough pitching here to sustain this club.

A five-game winning streak at the end of August buoyed hopes that the Snakes would finish strong, but they folded like a cheap card table after that, slithering to an ugly 10-20 record from September 1 on.

Let’s take a look at the performances of a few D-Back hitters today.

There is no greater lightning rod to pin the D-Backs’ struggles on than outfielder Eric Byrnes. The team’s highest paid player after signing a three-year, $30 million extension in 2007, Byrnes has been a colossal disappointment. Yes, injuries have decimated his last two seasons, but even when he’s been in the lineup, he’s absolutely sucked. And the team has pretty been much forced to continue to trot him out there given his salary, of which he is owed another $11 million next season.

With the seemingly endless line of young outfield prospects Arizona has been churning out in recent seasons, Byrnes has truly been an albatross. But there are already rumblings that Arizona may try to part with him this offseason – does that mean going so far as buying him out? It’s possible. Byrnes got hurt in June, part of a rash of injuries to D-Back flyhawks.

On the plus side, these injuries afforded the team the opportunity to get an extended look at some promising young outfielders like Gerardo Parra and Alex Romero. As for the 33-year-old Byrnes, is he done like dinner? As good as he was in 2006 and 2007, it’s hard to believe he’s got nothing left. Hey, he cut his strikeout rate last season. There, I said something good about him. But let’s get real – his fantastic stolen base potential is virtually useless when he’s getting on base just 27 per cent of the time. Arizona needs to ditch Byrnes at all costs.

Speaking of outfielders who disappointed, how about Chris Young? Think about how exciting a Fantasy outfielder he was in 2007 when he nearly turned in a 30-30 season. Sure, his BA was crap, but you’re okay sucking that up when he provides that much-sought after power-speed combo. Last season, Young showed minor progress on the BA front, but his power and speed slipped significantly. This year, everything was down – especially his power, which was unacceptably low for an outfielder.

Young actually struggled so badly at one point that he had to be sent down to the minors. As we predicted, that demotion seemed to do the trick, as he was far better upon his return, swatting six homers in September, and scorching the ball over the final week in October.

Yes, Young struggled for most of the season, but having just turned 26 last month, he still has plenty of upside potential, so don’t you dare write him off. But if he doesn’t show rapid improvement in the first half of 2010, Young could easily transition from a core player to a Quad-A dude very quickly, especially given the abundance of options Arizona now has in the outfield.

Another D-Back I had high hopes for this season who burned owners badly (myself included) is catcher Chris Snyder. Again, injuries were a major factor here, as back woes sent him to the DL twice, the second time ending his season prematurely and necessitating surgery. The fact that when he was in the lineup Snyder couldn’t hit his weight wasn’t a shock, but that his power was sapped was the big burn. After showing such steady progression the previous three seasons, I had identified Snyder as a catcher ready to become a real Fantasy force in 2009 – especially considering he was right in his prime power years.

Unfortunately for Snyder, Miguel Montero really took advantage of the opportunity, establishing himself as the everyday backstop. Snyder is under contract through at least 2011, so he’s going to get another shot next year, but it’s clear he’s now the underdog in this position battle. Still just 28, Snyder is expected to be 100 per cent healthy by Spring Training 2010, but has his window closed?

I really hope the D-Backs don’t give up on him as a potential starter, but Montero may not give them a choice.

By RotoRob
This entry was posted on Wednesday, October 14th, 2009 at 11:27 am and is filed under BASEBALL, Fantasy Notes, RotoRob. You can follow any responses to this entry through the RSS 2.0 feed. You can skip to the end and leave a response. Pinging is currently not allowed.