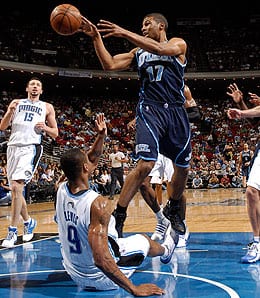 Ronnie Price is hoping to be Utah’s back-up PG this season.

We’ve got more of the 2009-10 RotoRob NBA Draft Kit today with the release of another team preview. While news of LeBron James’ cancer scare from earlier in the year surfaces, let’s put the Utah Jazz under the microscope.

The 2008-09 season was business as usual for the Utah Jazz: Play inspired ball at home (33-8 record), putrid ball on the road (15-26), do enough to make it into the playoffs (third in the Northwest Division and eighth in conference), then take a playoff beating from a clearly superior team (lost to the Lakers 4-1). Such has been the history for the Jazz, which, despite earning a playoff berth 23 of the past 26 seasons, has yet to reach NBA pay dirt. Utah also has possibly the least appropriate nickname in sports; seriously, when was the last time you heard anyone gush about the smokin’ hot jazz scene in Salt Lake City, Ogden or Provo? Your days in the French Quarter are 30 years’ worth of over, fellows – what about updating the nick to something more Utah apropos? Such as…maybe…umm…ahhh…well, there has to be something better than Jazz, doesn’t there?

One would think that such a long history of frustration would have moved Utah management to action, but the past offseason was a very quiet one in Salt Lake City. Most of the activity surrounding the team involved speculation as to when and where star power forward Carlos Boozer would be traded. Boozer elected not to opt out of his hefty (and expiring) contract, leading many to believe that a trade was in the works.

Rumours flew, names were dropped, speculation ran its rampant course and…nothing happened. Boozer is still in town, and his contract has the Jazz well above the luxury tax ceiling, prompting – you guessed it – trade rumours.

If Boozer were to indeed depart, his leaving (and arrival somewhere else) would have serious Fantasy implications. The guy’s injury-prone, doesn’t block shots and can’t shoot free throws, but he has averaged double-digit rebounds in three of the past four seasons, and eclipsed 20 points per game in two of those campaigns. Watch this situation closely, as the Fantasy fallout from this potential deal figures to win (and lose) a lot of leagues this year.

Incumbent starting small forward Miles will miss 6-to-8 weeks after undergoing surgery to repair a ruptured ligament in his left thumb. Sixth man Kirilenko looked like the logical stand-in for Miles, but Jazz coach Jerry Sloan has publicly floated the idea of moving bruising power forward Millsap to small forward, while leaving Kirilenko in his bench role. Millsap was an absolute beast last season while filling in for an injured Boozer, racking up an average of 16 points, 10.3 rebounds, 2.4 assists, 1.2 steals and one block per game as a starter. If Millsap gets the nod at the three, his Fantasy value would take a significant jump upward, while Kirilenko would earn a slight downgrade.

Williams was one of only two players to average double-digit assists last season (the other was some guy named Chris Paul from New Orleans), and the 25-year-old point guard still has a fair amount of upside in his game. It would be nice to see Williams increase his three-point shooting (only about one trey per game) and cut down on his turnovers (a beefy 3.4 per contest each of the past two seasons). His turnover rate is really the only dent in D-Will’s armor, but even in nine-category Fantasy leagues, he is still an elite backcourt player. More of the same should be in store for ’09-10, so give Williams a look at the end of the first or beginning of the second round in your Fantasy draft.

Once upon a time, Kirilenko – the Russian Rifle, AK-47 (still one of the coolest nicks out there, by the way) — was a fantasy monster, racking up steals, blocks and boards aplenty whilst endearing himself to Fantasy owners the world over. Well, for the past three seasons, the “rifle” has been little more than a popgun, and his 1.2 blocks per game a season ago represented a career low. His rebounds have plummeted from 8.0 per game in 2005-06 to a pedestrian 4.8 last year, while his point-per-game average has tumbled from 15.3 four seasons ago to just 11.6 last year – which actually was a significant jump upward from the 8.3 stinker he laid on the board in 2006-07.

Now there is talk – public, straight from the coach kind of talk – that AK-47 might not gain the SF starting gig while Miles is on the mend. Perhaps the 37 games Kirilenko has missed over the past three seasons is inspiring his coach to limit his minutes. Clearly, this is not good Fantasy news at all, so don’t reach for AK-47 based on your memory of his days of Fantasy stud-dom – they appear to be just dots in the rear-view mirror.

Millsap will, at worst, play about 26-to-28 minutes off the bench in relief of either Boozer or Okur. Look for about 10-to-12 points, 7-to-8 rebounds and close to one block per night on those occasions. Not bad, but with the recent talk from coach Sloan about Millsap possibly sliding into the starting SF spot, the ceiling is much, much higher. We talked earlier about how effective Millsap was while Boozer was on the shelf, and there’s little reason to believe he couldn’t match – or even surpass – those numbers banging the glass alongside the Boozer-Williams pick-and-roll show. Of course, if Boozer is dealt, Millsap’s Fantasy value figures to skyrocket.

Watch the Utah lineup carefully as the preseason winds down; if Millsap wins the job, he should immediately be reckoned a Fantasy starter in just about every format. Most draft “cheat sheets” still have him slotted as a high-end reserve, making him a potential draft day steal for the savvy Fantasy manager (that would be you, Sparky).

The Jazz selected VCU point guard Eric Maynor with the 20th overall selection in this year’s draft, and the youngster may be in line for at least modest run this season. Maynor is a polished and intelligent player who averaged 22.4 points, 6.2 assists and 1.7 steals per game in his senior season. He is currently in competition with combo guard Price for the back-up point guard role, and if he can win the job, Maynor could see about 10-to-12 minutes per game spelling Williams. Don’t forget, though, that D-Will missed 14 games due to an ankle injury last season – and has been dealing with some knee tendinitis this preseason.
Don’t draft Maynor in most leagues, but if he indeed wins the back-up job keep him on your radar in case Williams needs some time off.

The big story this offseason was the supposedly impending trade of Boozer, but after much cyber-ink was spread and countless rumours mongered, The Booze Cruise is still sailing in Utah. Boozer’s contract situation would seem to point towards him being traded this season, and if that happens, every Fantasy owner will hasten to dissect the players (and potential role changes) involved.

By Buck Davidson
This entry was posted on Tuesday, October 20th, 2009 at 11:05 am and is filed under 2009-10 RotoRob NBA Draft Kit, BASKETBALL, Buck Davidson, Team report. You can follow any responses to this entry through the RSS 2.0 feed. You can leave a response, or trackback from your own site.