The Wire Troll: Welcome to the Nat House 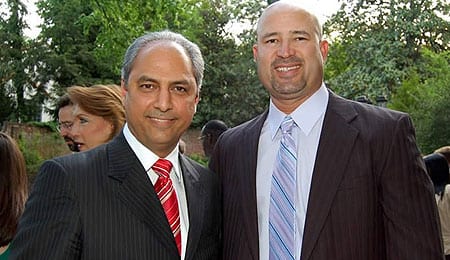 Perhaps Manny Acta (right) should spend less time at gala events and more time putting his nose and double chin to the grindstone so he can figure out how to fix the National bullpen.

We’re a month into the season, and it’s high time for one of my infamous rants. The subject of my venom today is the Washington Nationals and Manny Acta. What the hell are you doing in the nation’s capital, Manny? That bullpen is a mess and your decision making is greatly contributing to creating that mess. Yes, Joel Hanrahan has been struggling and a reprieve is in order, but promoting Garrett Mock after taking the time to convert him from a starter to relief specialist and then giving him all of five innings to prove himself worthy is preposterous. Lost in this disaster is Steven Shell, who was recently DFAed and refused the assignment, becoming a free agent. Yes, this is the same Steven Shell that moved very nicely into the set-up role at the end of last year and managed to put together a 2.16 ERA and 1.08 WHIP in 2008. At least he was smart enough to get out of Dodge.

Moving forward, this leaves us with a committee of Julian Tavarez, Kip Wells and the injured Joe Beimel. Seems like an improvement to me. Beimel has been effective over the past several years, but is currently rehabbing a hip flexor and got bitch slapped to the tune of five runs and seven hits Friday for Single-A Potomac. At that pace, he looks like he’s just about ready for the Nats. Get a grip, Mr. Acta, this is almost getting embarrassing.

My recommendation for those looking to gamble on a closer in Washington is to save yourself the aggravation and stay away. If you’re truly that desperate for saves, make a trade. If you simply are seeking frustration, look to the Colorado bullpen; at least there is potential there.

Now that I’ve got that off my chest, let’s move forward to this week’s waiver wire.

J.A. Happ, Philadephia Phillies, SP/RP: Chan Ho Park is not the answer in the Phillie rotation. Now if only someone could convince Charlie Manuel of that. One would think that the 8.57 ERA or possibly the 28 hits and 11 walks in those 21 quality IP might be enough. Obviously not, but the ankle injury to Cole Hamels might be just enough to get Happ a start or two while waiting for Park’s eventual demise. Happ has been very steady in middle relief and is a good candidate in both mixed and NL-only leagues.

Matt LaPorta, Cleveland Indians, OF: The rush to waiver wires throughout the land is officially on and the phenom LaPorta is the current object of our affections, and well he should be. At Triple-A Columbus, LaPorta managed five homers, 14 RBI, and a great .333 BA in only 75 AB. Travis Hafner has hit the DL and Ben Francisco is currently struggling so the opportunity for playing time is certainly there. LaPorta is the guy that those with the first waiver wire priority have been waiting for. If he’s still available go get him in all formats.

Doug Davis, Arizona Diamondbacks, SP: Out in the desert I hear the ticking of a time bomb waiting to explode, but the dumb thing just continues to tick. That, my friends, is Doug Davis. After the terrible start against the Giants April 24, I was expecting the worst, and lo and behold he shuts down the Cubs in his next start on a two-hit gem. Davis is currently sporting a 2.91 ERA and 1.18 WHIP and is keeping the walks down to a minimum, at least by his standards. Roster him in all formats and hold your breath.

Huston Street, Colorado Rockies, RP: The revolving door of closers in Colorado keeps spinning. Manny Corpas gets the gig and then forgets how to pitch, allowing Street another opportunity to close out games for the Rockies. This week it is Street, next week it is Corpas, and on it goes. Right about now the Rockies are probably seriously bemoaning the injury to Taylor Buchholz or else he’d be closing. It’s a mess, but a save is a save is a save, and if one is currently in need, Street is the flavour of the week in Colorado.

Andrew Bailey, Oakland Athletics, RP: The A’s rotation currently consists of Trevor Cahill, Dana Eveland, Brett Anderson, and Josh Outman. They are all young and struggling, making this a perfect opportunity for a quality middle-man to get some solid opportunities. Bailey would be that man. He is off to a great start with three wins, a 1.53 ERA, 0.74 WHIP and 20 strikeouts in 17 2/3 IP. Bailey should be rostered in AL-only formats and deeper mixed leagues at this time.

Rod Barajas, Toronto Blue Jays, C: Barajas is currently caught up in that offensive euphoria in Toronto known as the Blue Jays. He is 14-for-26 over the past week with five RBI and six runs scored. How long this will last is another story, but if you’re looking for a replacement catcher he is certainly getting the job done and is currently a great add in AL-only and leagues requiring two catchers.

Josh Anderson, Detroit Tigers, OF: Marcus Thames has hit the DL with a strained rib cage muscle and could be out of action until the All-Star break. Anderson, currently batting .311 with six stolen bases, should be the main beneficiary. If your need is speed, grab the former Brave quick while he’s still available.

Kendrys Morales, Los Angeles Angels, OF: Since April 22, Morales has put together a .343 BA, with four homers, 12 RBI, and eight runs scored. The 25-year-old is also owned in only 42 per cent of CBS leagues. He offers a nice bonus in leagues with 10-game positional eligibility rules as he also qualifies in the outfield. It appears that Morales has finally turned the corner, so he makes for a great add in all formats.

Jose Mijares, Minnesota Twins, RP: The 24-year-old southpaw showed up to camp this spring terribly out of shape after spending the offseason competing with Bobby Jenks on the buffet circuit. He was quickly dispensed to Triple-A Rochester and recalled April 20 to replace the injured Jesse Crain. In 4 2/3 IP since his recall, Mijares has struck out eight, reminding us of that great run at the end of last season, and has moved very quickly into a set-up role for the Twins. Joe Nathan is about as solid as they get at closer, so don’t expect Mijares to be sneaking any saves anytime soon, but for deeper formats and leagues that count holds he is a solid addition.

David Aardsma, Seattle Mariners, RP: Now here’s something completely new. Brandon Morrow has been placed on the 15-day DL with forearm tightness and looks to be out for at least the next week or two. Surprise, surprise! If you’re looking for save opportunities in the interim, Aardsma is currently the man in Seattle. At least he should be easy to find using the alphabetic search function.

By Tim McLeod
Tags: BASEBALL, Manny Acta
This entry was posted on Sunday, May 3rd, 2009 at 12:59 pm and is filed under BASEBALL, The Wire Troll, Tim McLeod. You can follow any responses to this entry through the RSS 2.0 feed. Both comments and pings are currently closed.