The Wire Troll: Jack’s Back Edition 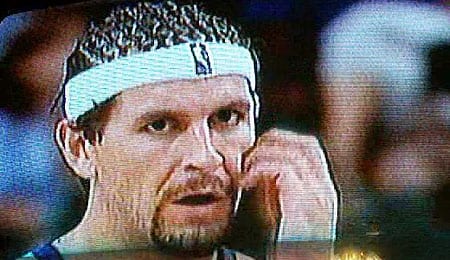 Chris Kaman, Los Angeles Clippers: The distractingly handsome Kaman is back in uniform for the Clips, and while he hasn’t done shit in his first two games back, keep in mind he did average 13.9 points and 9.4 rebounds before getting injured. Expect him to take some time to round into form, but those with an available bench slot should consider using it immediately on Kaman.

Joakim Noah, Chicago Bulls: We had some concerns about Noah’s playing time after Brad Miller arrived in the Windy City at the trading deadline, but those appear to have been unfounded. In seven March contests, Noah is averaging 8.4 points and an impressive 10.4 rebounds a night – and those numbers are hurt by an abbreviated 11-minute effort in Wednesday’s blowout loss to Orlando. The Florida product should give your squad a boost down the stretch, particularly on the glass.

The Celtics continue to deal with significant frontcourt injuries, requiring Kendrick Perkins to raise his game offensively. He had a run of five consecutive double-digit scoring performances snapped on Friday, but he’s still accounting for 10.7 points and 8.0 boards per game this month…Denver’s Chris Andersen continues to be an underrated source of blocked shots, rejecting 3.3 shots per night over his last 14 games. Those looking to make a move in that category shouldn’t hesitate to add The Birdman.

Andres Nocioni, Sacramento Kings: It took a couple of weeks, but Nocioni is now starting in Sac Town and doing a solid job. In three starts with the Kings, he’s averaging 17 points and seven rebounds per game while being a bit more judicious with his shot selection. The Kings have played only four games this month and have eight left, so he should be well rested and the extra games will be a boost for those that play in weekly head-to-head formats.

Kyle Korver has picked up his scoring, reaching double figures six times in Utah’s past 10 games. He won’t contribute much beyond his points and three-point shooting, and even that is hit or miss, but his 12.1 PPG in March is his highest total in any month this season…While many NBA fans long ago forgot professional basketball was still being played in Washington, D.C., Darius Songaila has quietly been putting up decent point totals while shooting an insane 65.9 per cent from the field since the All-Star break. He’s a good option in deeper leagues…With Peja Stojakovic out of action for the last two weeks with back spasms, second-year man Julian Wright has moved into the starting lineup. The results have been mixed, but his increased role gives him limited value…Where did Renaldo Balkman come from? The former Knick has nabbed 10 or more rebounds in four straight games and added 36 points in his last two. He should be added in all deep leagues and might be a savvy short-term addition in shallower ones…If Leon Powe keeps scoring like he has in his last four games (85 points) maybe we’ll need to bestow the “Agent Zero” nickname on him! Powe’s value is unlikely to last once Kevin Garnett and Glen Davis get back in action, but he’s a quality addition until then.

Jarrett Jack, Indiana Pacers: Anyone thinking Jack’s value would pass…well…doesn’t know Jack. The fourth-year guard has dropped 20 or more points in six of his last nine games and is averaging a robust 19.9 points and 4.2 assists per game since the All-Star break. He’s a must own in all leagues regardless of size.

Bobby Jackson has been playing well with Beno Udrih (ankle) out of the lineup, scraping together 13.2 points, 4.7 rebounds and 3.7 assists a night in six starts. Unfortunately, Jackson fractured his cheek on Friday and his immediate availability is unknown. Look for an update on his health before committing to bringing him on board…Anthony Parker continues to log a ton of minutes, and more often than not he has been producing quality numbers. He’s by no means a sure thing, but the lingering nature of Jose Calderon’s hamstring injury makes the Spanish Fly a candidate to be shut down at any point (especially with the Raptors going nowhere fast). Were that to happen, Parker’s value would go north in a hurry. He proved he can handle the point when Calderon was out earlier this season.

By Herija Green
This entry was posted on Sunday, March 15th, 2009 at 6:47 pm and is filed under BASKETBALL, Herija Green, The Wire Troll. You can follow any responses to this entry through the RSS 2.0 feed. You can skip to the end and leave a response. Pinging is currently not allowed.