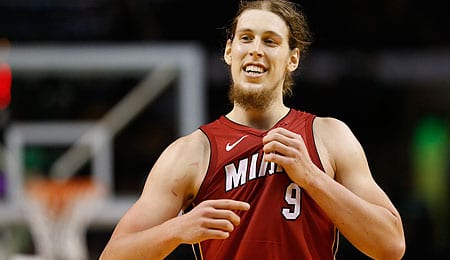 Kelly Olynyk proved to be one of the season’s top waiver wire pickups. (HoopsHype)

The 2017-18 Fantasy basketball season is in the can, and here’s hoping you had a great campaign and that our waiver wire picks helped steer you to a championship.

Kelly Olynyk, C, Miami Heat (Week Six): He’s not always the most aggressive defensive player, but Olynyk stayed healthy enough to play in a career high 80 games this season, setting a new personal best with 11.5 PPG while slightly upping his blocks. Over the final two months of the season, he was a top 60 player — especially impressive considering he didn’t log heavy minutes. Just how popular is Olynyk? Hell, there are dudes asking him out (see video below)!

Austin Rivers, PG, Los Angeles Clippers (Week Two): He missed some time with injury, but was never better while healthy. For the first time ever, Rivers was an asset in assists and he enjoyed career bests across the board. It’ll be interesting to see if he exercises his 2018-19 option or not. Would he dare leave his dad Doc with no son to coach?

Terry Rozier, PG, Boston Celtics (Week Four): The former Louisville star got his chance to excel in Boston this season — proving especially valuable down the stretch after Kyrie Irving went down. Rozier appeared in a career-high 80 games this season, sinking more buckets than ever before. He did a better job of getting to the line, and carried that into the postseason, setting career highs with 23 points in each of the first two games of the first round series against Milwaukee.

Jarrett Allen, PF/C, Brooklyn Nets (Week Six): Just 20 years old, Allen established himself as a building block in Brooklyn with a strong rookie campaign. He only played 20 minutes per game, but his PT kept rising as the season progressed, as did his touches. Allen did a good job of getting to the line and showed nice potential on the offensive glass. Best of all, his 58.9 per cent field goal accuracy ranked second among all rookies that played at least 30 games. Allen should be a big-time sleeper heading into 2018-19.

Michael Beasley, SF/PF, New York Knicks (Week 10): Beasley’s move to the Knicks ushered in his best season since 2010-11 when it looked like he was on the cusp of stardom. He spent a good chunk of the season starting, sinking more buckets and more three-pointers than he had in some time. Beasley also enjoyed the second best FT percentage of his career in a nice renaissance performance.

Dwight Powell, PF/C, Dallas Mavericks (Week 12): The second Canadian on our list, Powell has developed into a solid face up power forward, breaking through with a career high 8.5 PPG this season — 10.1 after the break, and a whopping 14.2 in February. He’s grown into a key component of the Dallas rebuild.

Mario Hezonja, SG, Orlando Magic (Week 12): Hezonja played in more games this season, and earned more starts than ever before, responding with a breakout campaign. To begin the season, he struggled to get into the rotation, but once he did, he really started to show why he was the fifth overall pick in 2015 (although he’s unlikely to ever live up to that lofty billing). One of the few bright spots in a dismal season in Orlando, he may now leave the Magic as an UFA, which is not a bad thing considering the pressure he must have felt to justify his draft selection.

Trey Burke, PG, New York Knicks (Week 20): Burke is a player we recommended substantially later in the season than most on this list — not until March. Even so, he turned into a stellar asset down the stretch, playing in more games in March, and then getting more touches in April. All told, Burke sunk more free throws this season and his rebounding work bounced back somewhat. He’ll again challenge for PT at PG for the Knicks next season.

Anthony Tolliver, PF, Detroit Pistons (Week 10): Tolliver had gone eight years since scoring 25 points in a game before turning the trick in late-March. A week and a half later, he did it again. Tolliver’s touches were up this season and he set a career high by averaging two treys. He’s set himself up well as a free agent this summer.

Kelly Oubre Jr., SF, Washington Wizards (Week Two): Oubre enjoyed a breakout campaign, getting a nice boost in minutes while continuing to improve as a free throw shooter. He upped his rebounding and steals, too, and if he can add a bit more muscle, he could be an even bigger force going forward.