How to Dominate Your NBA Fantasy Playoffs 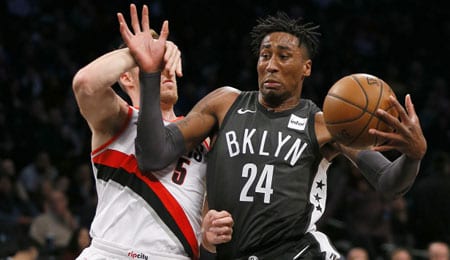 If you have plenty of three-point shooters, Rondae Hollis-Jefferson can help you in other areas. (Paul J. Bereswill)

The standard league semis are about to hit, followed by the finals run. Now is the time for NBA Fantasy fans to get their teams in order and plan ahead for success in the postseason. There are some hot picks and NBA Fantasy sleepers we’ll be looking at to help fans maximize their gains on the latest statistics. With the right approach, it promises to be a great year for NBA Fantasy action.

Roto Leagues: Play to Your Strengths

Anyone with some experience with an NBA Fantasy league should have come to recognize which areas they prosper in and where they come up short. Hopefully you already started to remedy your areas of weakness before the trade deadline fell. Still, making picks in multiple categories in the postseason presents its own difficulties, as you should really be tangling with strong teams by this point. So if you’re still coming up short in a particular category, don’t be afraid to cull the herd in your dominant areas to prop up your weaker fields.

Check your situation against the upcoming fixture table to see if you have any especially problematic encounters on the horizon. By getting your house in order prior to the NBA Fantasy trade deadline, you can start paying attention to basketball betting tips on the periphery of the game. If such a prospect has a rocky road ahead, you might want to double down with a similar kind of player who has a less fearsome schedule ahead, especially if your league rosters are going to be locked on Mondays.

You should evaluate this concern on a player-by-player basis, but there’s no sense in holding on to an injured player on the off chance that they’ll be healthy for the last few games of the NBA Fantasy season. For instance, rumours of the return of Kawhi Leonard (quad) persist, but now Tony Parker says he doesn’t expect him back, so go ahead and dump Leonard (who is doing anything but balling with his new shoes — see video below). If you think your roster can hold its own during the NBA Fantasy semis, you’ll be in a better position to take a chance on players further down the road to recovery.

At this point, imaging your next round opponents will be guesswork, but once you start getting the picture, you can begin planning for a confrontation. If you’re in an NBA Fantasy points league, think about the form of your opponent and how close a matchup it would be. From there you can decide how to approach the waiver wire: whether you’ll play it safe with your strongest players or if you’ll hold back on good players with sporadic schedules to contribute to games played. If it’s a roto NBA Fantasy league, you can probe the opposing team for weaknesses and see if there are any vulnerabilities you can exploit to your advantage. Once you’re down to the cream of the NBA Fantasy crop, your success will probably hinge on just a couple of tightly contested categories, so be sure to target these on the waivers.

As previously stated, you can make inroads now across the formats by focusing on players who have plus schedules further down the line, allowing you to max out on games played each week. Once the NBA Fantasy playoffs are in full swing with the daily-move divisions, make the most of every possible game, weighting your lineups as much as possible every day. Certain NBA Fantasy leagues have restrictions on the amount of players you can cover with waivers. In these cases, employ every one if need be. For no limit leagues, keep your weekly team schedules in mind and strategize for getting in the maximum amount of NBA Fantasy games possible. After all, the benefits of streaming four or five games from a mediocre player can reap commensurate benefits from two games played by an impact NBA Fantasy player, whilst keeping the wolves from the door when it comes down to later life or death NBA Fantasy situations. Players enjoying preferable circumstances on a given night from a plus-matchup or teammate injuries should be made the most of. Even if you don’t participate in DFS NBA Fantasy matches, follow this market to help discover short-term impact talent that you can bring in from the wire.

Don’t Let Up on Your NBA Fantasy Season

Don’t hesitate to impede your NBA Fantasy opponents from adding crucial free agents to their roster. This could mean adding a player just to keep him from the grasp of another team by the time a semifinal comes around. Hobbling your NBA Fantasy opponents in this fashion can reap dividends further down the line. Needless to say, don’t get comfortable; push your advantage if you’re in the lead with your NBA Fantasy league, and don’t hold back from rotating lineups if you’re lagging behind. It always pays to play like every game is your last, and don’t take your hands from the wheel until the last NBA Fantasy whistle is blown.

Now it’s your turn. Let us know in the comments below what strategies are working for you.

By David Weinger
Tags: NBA
This entry was posted on Wednesday, March 21st, 2018 at 9:06 pm and is filed under BASKETBALL, David Weinger, Strategy. You can follow any responses to this entry through the RSS 2.0 feed. Both comments and pings are currently closed.