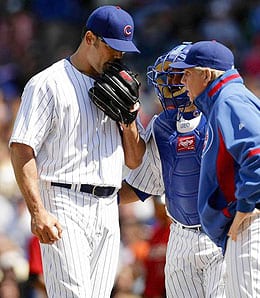 Kevin Gregg’s latest implosion has cost him his job as the Cubs’ closer.

Rafael Soriano has looked pretty iffy as of late and word out of the Brave camp is he’s experiencing some shoulder problems. They say it’s nothing that a little rest won’t cure, but with Soriano’s injury history, the news is worrisome. Mike Gonzalez is obviously the next in line. The two split saves earlier this season until Soriano seized the job, but Gonzalez hasn’t pitched poorly. In fact, he’s been quite effective lately, although he’s still far from a sure thing. Soriano, who hasn’t pitched since giving up a game-tying home run on Friday, has earned some leeway with his efforts earlier this season so the job is still his to lose. But with the way he’s been pitching lately that could be sooner rather than later.

The heat on Kevin Gregg got hotter on Monday when he blew a save opportunity by allowing four runs in a Cub loss. Lou Piniella said that he’s going to change the way things are done in the late innings and that means a major shakeup in the Cubbie pen. Carlos Marmol is the new closer in Chicago but he hasn’t pitched that well this season and with the Cubs season slowly slipping away, Sweet Lou is going to be even shorter on patience. If Marmol’s control issues continue to plague him, keep an eye on set-up man John Grabow. He’s only allowed two hits and no earned runs since being traded from the Pirates. He might be the best option in the pen right now. Another arm to look at in the bullpen is Angel Guzman. He’s got nasty stuff and is having a much better season than either Gregg or Marmol. Working against him might be his ability to pitch multiple innings if needed. But if you’re looking for a deep sleeper, Guzman might be your man. The bottom line here is that Pinella has three legitimate options beyond Gregg, who now moves to a set-up role.

Huston Street had been a stud in the Colorado pen until August 10 when he got shelled for four earned runs. He bounced back in his next outing looking like his dominant self, and Tuesday night earned his 30th save, albeit in shaky fashion. Consider the four-run shelling just a minor hiccup in an otherwise outstanding season for Street, who has now reached 30 saves twice in his career. Remember Manny Corpas, the one-time closer who lost the job and pretty much stunk up the joint? Corpas recently had surgery to remove a bone chip from his elbow and he’s hoping to return to contribute in September. If for some reason you have this guy on your team, cut bait now. He’s only had one good season in his life. Bone chips or not, Corpas is a stiff.

Matt Lindstorm has really struggled since coming off the disabled list, looking very hittable. He wasn’t that good before hitting the DL so consider him a shaky option at closer at best, as despite Fredi Gonzalez’s insistence that Lindstrom will eventually get the gig back, he just hasn’t looked ready. Meanwhile Leo Nunez has not grabbed hold of the closer role with his latest efforts. He’s allowed earned runs in four of his last six appearances and is making things a little too interesting. Other possibilities here include Dan Meyer and Kiko Calero, but whomever ends up with the job looks to be a low-end closer option.

Looks like Jonathan Broxton’s troublesome toe continues to bother him. He’s given up earned runs in three of his last six appearances and his ERA has climbed to a season-high 3.25 before getting trimmed a bit in his last two outings. Not bad for most closers but more is expected of Broxton, who was moving into elite status, but is now coming under fire. He will be a dominant closer again, but expect some struggles the rest of the year because of the toe. Just in case, keep George Sherrill queued up in the waiver wire if you don’t have him already. Since joining the Dodgers, he’s been flawless in putting out those seventh and eighth inning fires.

Billy Wagner is close to coming back from Tommy John surgery and might be activated this week. While he won’t be closing anything with Francisco Rodriguez around, he could get a look from some contenders looking for relief help down the stretch. Control is usually the last thing a pitcher finds coming back from this kind of surgery, so don’t go picking Wagner up expecting him to give you great numbers. He’s an interesting pitcher to take a flyer on next year.

Brad Lidge kept his not-so-perfect record intact on Saturday by suffering his fifth loss against no victories. It’s been that kind of season for Lidge. I’d say he’s been awful but that would be considered a compliment. Lidge has been worse than that and could end up costing the Phillies in the playoffs when you can’t afford to give away games. Last year, he was a perfect 41-for-41 in save chances and this season, he’s blown eight of 31 while compiling a butt-ugly 7.21 ERA — which is the worst mark among qualifying relievers. Ryan Madson has been excellent as an eighth inning set-up man, but was pretty shaky when Lidge was on the DL earlier this season, underscoring the lack of a true alternative to Lidge. Charlie Manuel might be leary of putting ninth inning pressure on Madson, but then again he might not have any other option.

Matt Capps. The good news is, he’s already matched his save total from last season (21). The bad news is his ERA is more than twice as high as last year. Ugh! If you’re a glutton for punishment, continue to trot Capps out there every week. He’ll grab the odd save with the Pirates and look bad doing it. He’s been hittable and laughable as a closer. Thankfully the season will end soon and you can wash the stench that Capps has left on your team out the door.

Heath Bell took a beating on Sunday, giving up three runs and taking the loss to the St. Louis Cardinals. Even the best of closers have a bad day and Bell has been one of the best closers in the league this season. Don’t worry, he’s bounced back since then with his fifth win followed by his 30th save. Set-up man Edward Mujica felt the power of Albert Pujols the hard way as Pujols smacked a bases loaded line drive off the back of his knee on Sunday. Mujica came back to pitch the next night so it looks like he’s okay. He’s been a nice surprise in the Padre pen this season, emerging as a workhorse, but he’s no threat to Bell.