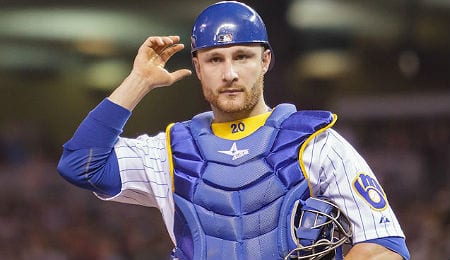 That proved prescient when a couple of months later it was announced that Mauer would shift over to first base full-time this year. He’s still catcher eligible, but this is his last hurrah at the position. Mauer was always perceived as a top-notch defender behind the plate, but that isn’t necessarily accurate. Last year, a concussion cost him weeks, so he had 100 less at-bats to work with. To his credit, Mauer still managed to hit more doubles and homers and he continued a renaissance that started in 2012. It was disappointing to see him contribute nothing in the stolen base department, but perhaps the anticipated better health that will come from not catching will translate into him running again. Always considered extraordinarily tall for a catcher, Mauer will now employ that height advantage where it makes sense — at first base. His walk rate dipped last year, but considering he peaked in 2012, we’re not concerned that this is a trend.