What the Hell Ever Happened to…Brian Reith? 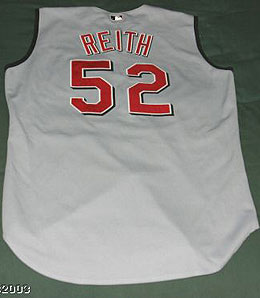 We were able to find his jersey, but Brian Reith himself is MIA.

It’s time to dig through the archives once again to pull out another blast from the past and try to find out what the hell ever happened to Brian Reith.

A 1996 sixth-round pick by the Yankees out of an Indiana high school, Reith was never what you’d consider a top prospect, but he certainly opened some eyes with some excellent seasons in the New York system, including 2000 when he went 9-4, 2.18 with 100 Ks in 119 2/ innings at High-A.

He was intriguing enough to be considered a key component of the package that the Reds received when they shipped Denny Neagle to the Yankees in 2000.

The 6’5′ righty made his MLB debut in May of 2001, but many believe he was rushed to the majors, considering he had made only one start above Double-A before arriving in Cincinnati.

That certainly seemed to be the case when the young Reith was tattooed in his first taste of the Show, going 0-7, 7.81, with major control problems.

Reith remained in the minors the entire 2002 season, pitching as a starter with middling results. The Phils grabbed him off waivers in July, but the Reds snatched him right back in August. So they had big plans for him, right? Maybe not. The following season, Cincy converted him into a reliever, thereby negating much of his potential value.

He was superb in Triple-A as a reliever in 2003, and when the Reds gave him another look, Reith was decent, but again struggled with his command (36 walks, 39 strikeouts).

The following season, he received even less of a look, as his control starting really deteriorating, and with it, his results ‘ both in the majors and at Triple-A ‘ suffered badly.

He hasn’t pitched on a major league mound since, winding up with a 4-12 mark and an ERA of almost 6.00 in nine starts and 64 relief appearances spread out over three seasons with the Reds. The problem for Reith was pretty simple: 71 walks against 85 Ks, a stark contrast to his almost four-to-one K/BB ratio as a minor leaguer.

In 2004, Reith became a free agent and was signed by the Pirates, spending one mediocre season with their Triple-A team before becoming a free agent again in October 2005.

The Cubs signed him in February 2006, but he never pitched a day for them, assumedly missing the year with an injury, although none of my sources seem to know for sure. Clearly, he fell off the radar and in October, he became a minor league free agent.

Reith isn’t an old man, having just turned 29 last month. But assuming he never sees the light of day again, his current closest player comparison as per baseball-reference.com is Jeff McCurry, hardly what we expected of Reith when he was putting up excellent minor league numbers in the late-90s and early 00s.

By RotoRob
Tags: Brian Reith, New York Yankees
This entry was posted on Sunday, April 1st, 2007 at 8:58 pm and is filed under BASEBALL, RotoRob, What the hell ever happened to?. You can follow any responses to this entry through the RSS 2.0 feed. Both comments and pings are currently closed.