On the Comeback Trail 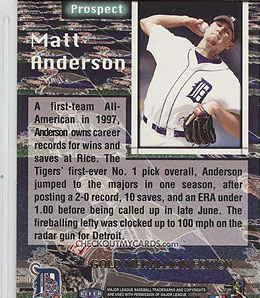 Remember Matt Anderson? You know, the first overall pick in the 1997 draft who was supposed to become one of the game’s top closers?

Well, he recently resurfaced, pitching winter ball with Hermosillo of the Mexican Pacific League as he attempts to make a comeback.

The 31-year-old righty has been out of the game since 2006 when he was absolutely shelled (8.74 ERA) in 26 appearances at Triple-A Fresno.

Anderson’s tale included an amazingly rapid ascension to the majors, in retrospect, probably his undoing (of course, his legendary control issues never really helped). He made his pro debut in 1998, and by the end of the year was in Motown, quickly establishing himself a solid, if wild, set-up man.

The real struggles began in 1999, but he did enjoy a pretty solid year in 2001 as the Tiger closer. Major injury issues, coupled with bouts of ineffectiveness plagued Anderson for the next few seasons.

The Tigers let him walk as a free agent after the 2004 season, and he would up in Colorado in 2005, but he was again ineffective at Triple-A, and was absolutely firestarter with the Rox, walking more than a batter per inning.

In 2006, after crashing and burning in the Giants’ system, Anderson found himself in Indy ball ” just a step away from being out of the game, and he pitched well enough at Bridgeport to fan the flames of hope that maybe he wasn’t done.

However, Anderson didn’t pitch at all last year.

And now, in the MPL, he continues to struggle with his control (three walks in 3 1/3 innings). Anderson simply can’t overpower hitters any longer, and with the walks still a major problem, it’s hard to envision a scenario where a major league organization gives him another chance. He dropped two decisions in three apperances last month and has not pitched since. It’s unclear if he got hurt, or simply decided to leave the team, but MinorLeagueBaseball.com still lists him as active, for what it’s worth.

While you kind of have to feel for him, given how disappointing his career has been based on the expectations, and how great a story it would be if Anderson could finally carve out some success for himself, the likelihood of that happening is pretty damn slim.

By RotoRob
This entry was posted on Monday, December 3rd, 2007 at 6:36 pm and is filed under BASEBALL, RotoRob, What the hell ever happened to?. You can follow any responses to this entry through the RSS 2.0 feed. You can leave a response, or trackback from your own site.