Former Sox Catcher Gets Call to the Hall 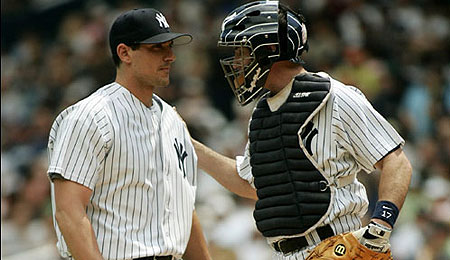 It may just be the Rockland County Hall of Fame, but John Flaherty deserves kudos if for nothing more than talking Carl Pavano off a ledge.

With the Sox in town this week, it’s been a busy few days as I scurry back and forth to the Rogers Centre in between trying to pack (the RotoWidow and I are moving shortly) and get some’ack’work done.

But I couldn’t let this monumental tidbit skate by without some acknowledgement as I see that former Red Sox catcher John Flaherty has been elected into the Hall of Fame’er, the Rockland County Hall of Fame. Still, an honour is an honour and he deserves to be lauded for his lengthy if somewhat undistinguished big league career.

Many may remember that Benito Santiago set not only a rookie mark but the record for all catchers by hitting in 34 straight games in 1987. But how many could cite Flaherty as having the second-longest hitting streak by a catcher in major league history? Yup, his 27-game streak in 1996 definitely sticks out as a highlight in a 14-year career.

He was never much of an offensive threat, but like many backstops who morph into ideal back-ups in their later years, he had some pop and could be counted on to stay ready for his one or two games per week.

Last year, Flaherty came back to where it all began, signing a minor-league deal with Boston before he realized that catching Tim Wakefield was no way to end his career and he decided to retire during spring training at the age of 38.

Flaherty, whose final three active seasons were as a Yankee, is now working as an analyst for the YES network.

By RotoRob
This entry was posted on Thursday, May 10th, 2007 at 4:51 pm and is filed under BASEBALL, RotoRob, What the hell ever happened to?. You can follow any responses to this entry through the RSS 2.0 feed. You can skip to the end and leave a response. Pinging is currently not allowed.