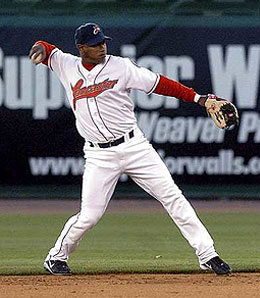 After two years with Lancaster of the Indy Atlantic League, Jose Ortiz is hitting up a storm in Mexico.

When I think back to the spring of 2001, I can’t help but remember the fervor in my keeper league over Jose Ortiz. An Oakland A’s minor league second baseman, he had surged forward in 2000 and climbed to the top of the heap as the consensus best available player in the minor league component of our league’s annual draft.

Well, nearly a decade has elapsed since then, and despite some impressive numbers overseas, in independent ball and more recently in Mexico, Ortiz hasn’t had a sniff of organized ball in the past five years. This naturally leads me to the obvious question: what the hell ever happened to Jose Ortiz?

Signed by the A’s out of the Dominican Republic as a 17-year-old shortstop back in 1994, Ortiz made pretty quick work of the A’s minor league system, showing immediate promise with a .300 mark in the Dominican Summer League followed by an even more impressive debut in North America when he batted .330 in the Arizona League in 1996.

Over the next three years, Ortiz continued to climb the ladder as the club slowly transitioned him to second base with Miguel Tejada ahead of him at short. By 1999, Ortiz arrived in Triple-A at the age of 22. It was about this time that injuries first started to be a factor as he missed significant time in both 1998 and 1999. However, he remained pretty productive, displaying a power-speed potential that had prospect hunters starting to pay attention.

In 2000, of course, is when Ortiz really gained prominence, putting up a monster year at Triple-A with 34 doubles, five triples and 24 homers in 131 games. He was caught stealing just nine times in 31 tries, struck out only 64 times and hit .351 with a .575 slugging percentage. Later that season, he made his major league debut. Small wonder the owners in my league were frothing over him, passing over prospects like Mark Teixeira, Roy Oswalt, Jimmy Rollins and Albert Pujols to grab Ortiz. For reference sake, I did not have a first rounder that year, taking Chin Hui-Tsao at No. 18 with my second-round selection (not my finest hour, clearly).

The following year is when things started to unravel for Ortiz. Even though his bat was major league ready, he spent most of the season at Triple-A, seeing action in just 11 games at Oakland. Apparently, Frank Menechino was blocking Ortiz’s ability to play everyday (which is just plain sad, when you think about it), and in July, the A’s leveraged Ortiz’s prospect status in a three-team deal to help land Jermaine Dye. Smooth move, Billy Beane.

The trade sent Ortiz to Colorado, which seemed like a major boon to his fantasy value. Not only did he get to suddenly play every day, but he got to do so in Coors Field half the time (and of course, this vastly predated the humidor days).

Unfortunately, the Rox didn’t seem overly impressed with what they got. They gave him plenty of action (almost 400 at-bats from mid-2001 through the end of 2002), but a lingering hamstring injury slowed him in 2002 and caused his power to go AWOL, and Colorado thought he was not quick enough to be a regular in the field. Plus, Ortiz’s lapses on defense and undisciplined approach on offense frustrated the club. When he was in Triple-A Colorado Springs, the organization tried to convert him into a utility infielder, getting Ortiz his first action at third, as well as his more customary shortstop and second base positions.

Ortiz was offered some decent coin to head over to Japan and he opted for go that route instead of trying to scare up a minor league deal. In two years with the Orix Blue Wave, he flashed his power, slamming 57 dingers. Yet, no offers came to return to affiliated ball.

Undaunted, he returned to North America and spent the next two seasons playing third base for the Lancaster Barnstormers of the Independent Atlantic League. When he signed with the team prior to their debut season in 2005, Ortiz was the first former top prospect Lancaster had ever landed. He wasted no time establishing himself as a force, batting over .340 with almost an RBI per game before his season ended in May with a torn biceps tendon. Apparently, Ortiz’s quick start had generated attention from the Indians, who were thinking about signing him to play third base for the big league club. But the injury nixed that plan.

Last year, Ortiz was able to play in 101 games and he drove in 80 runs in an All-Star season for Lancaster. He went off to play winter ball in Mexico, doing extremely well there before signing with Saraperos del Saltillo of the Mexican League, his current employer.

He’s now closing in on age 30, but judging by Ortiz’s play in Mexico, he may yet get another shot at the majors. He’s 46-for-104 (over .440) so far this season, with eight doubles, seven homers, 21 RBI. He has a .721 SLG and 1184 OPS. In a stretch of 132 games spread out over his final half-season in the Atlantic League, the Mexican Winter Ball season and the first couple weeks of the Mexican League season, he’s batting .324 and has clouted 40 homers with 117 RBI. Is someone going to sign this dude, or what?

Who knows? Perhaps Ortiz will use his Mexican League experience as a springboard back to the majors similar to what Julio Franco did. Or maybe he’ll go down as the worst first overall minor league pick anyone has ever made in my keeper league.

By RotoRob
Tags: Baseball America, Jose Ortiz, Oakland Athletics, Pacific Coast League
This entry was posted on Sunday, April 29th, 2007 at 9:57 pm and is filed under BASEBALL, RotoRob, What the hell ever happened to?. You can follow any responses to this entry through the RSS 2.0 feed. Both comments and pings are currently closed.