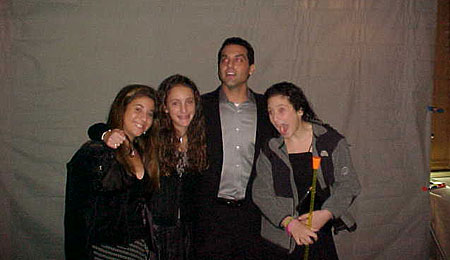 Believe it or not, Eric Valent was once a popular attraction on the Bar Mitzvah circuit.

Of this list of attendees to the Second Annual Hot Stove Dinner & Auction with the Phillies to be hosted by the Williamsport Crosscutters, who stands out as the person that would prompt you to buy a ticket: Hall of Fame broadcaster Harry Kalas, Kyle Kendrick, Chris Coste, D.J. Flick, Eric Valent, Dusty Wathan and the Phillie Phanatic.

Okay, admittedly, CFL star Flick of the Grey Cup Champion Roughriders isn’t exactly a household name for most, but to me the name that sticks out like a sore thumb here is Eric Valent.

A one-time hot shot prospect (first round pick in 1998) for the Phillies, Valent appeared to be on the fast track after — in just his fourth pro season — he was named an International League All-Star after smacking 21 homers for Triple-A Scranton/Wilkes-Barre in 2001.

Unfortunately, it was all pretty well downhill for Valent after that. While he did see action in parts of five big league seasons, Valent was only really useful in one season (2004, when he was an extra outfielder for the Mets). The Phils gave up on him in August, 2003, dealing him to the Reds. He wound up in the Mets’ organization that offseason as a Rule 5 pick.

After a couple of seasons with New York, Valent was signed by the Padres to a minor league deal in 2006. However, after failing to make the team despite a solid Spring Training, Valent didn’t last long with Triple-A Portland, being set free after just 30 games. He went over to Japan to play 24 games before the end of the 2006 season, struggling badly (.189) with Tohoku.

After sitting out the 2007 season, Valent is back with the Phillies, having recently signed on in a player development capacity. Let’s pray, for the sake of the Phillies’ organization, that this is very much a case of ‘those who don’t know, teach.’

By RotoRob
This entry was posted on Wednesday, January 9th, 2008 at 6:51 pm and is filed under BASEBALL, RotoRob, What the hell ever happened to?. You can follow any responses to this entry through the RSS 2.0 feed. You can skip to the end and leave a response. Pinging is currently not allowed.