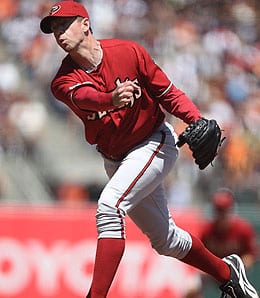 Brad Ziegler is no stranger to long shutout streaks.

In this week’s Saving Grace, we’ll tour the NL bullpens.

Taking advantage of the D-Backs’ current nine-game win streak, J. J. Putz has earned saves in each of his last eight appearances. He has only given up one hit in his past six IP with eight strikeouts. Putz has been a machine and has been a big help to all those in need of a late season playoff run. Both David Hernandez and Brad Ziegler have done a good job switching off setting up holds before Putz comes in late in each game. Ziegler hasn’t given up a run in 3 2/3 IP, covering his last five appearances. But remember, this is a dude that tossed 39 straight shutout frames for the A’s in 2008.

Francisco Cordero was superb in August, posting 10 saves and one win. He’s now just one shy of his fifth straight 30-save campaign. Despite a solid year from their closer, the Reds aren’t likely to pick up his $12-million option for 2012. After Aroldis Chapman allowed an eighth-inning lead to slip away on Sunday, he will likely be kept at the set-up position, giving Cordero all the save chances. If the Reds decide to keep Chapman in the bullpen next year, he could be a very intriguing Fantasy option.

Even though Huston Street has returned from the DL, he has yet to reclaim his closer job from Rafael Betancourt, who did a great job in his stead. Street recorded a hold in his first game back, while Betancourt came on and blew the save. However, Manager Jim Tracy went right back to Betancourt the next day, and he nailed down his fourth save on Sunday with a perfect inning. Keep an eye on this situation, as Street should take over the gig soon especially since the Rockies have $22.5 million invested in him. Bear in mind, however, that Betancourt is capable of being a valuable reliever even in a set-up role. In 2007 when he was with the Tribe, he recorded a 3.2 WAR — extremely high for a relief pitcher, whether a closer or not.

The Astros activated Enerio Del Rosario (shoulder) from the 60-day DL, but given how wild the rookie was before he got hurt, he has about as much chance of providing value as a screen door on a submarine. Still, if you are alive and in the Houston bullpen, anything can happen, right? Youngster Jordan Lyles has been recalled from Triple-A with the rosters expanding. He made 15 starts in Houston this season, but given the 20-year-old’s inning count, the Astros will employ him out of the bullpen down the stretch.

NL-only league owners might want to consider Kenley Jansen, who has been lights out lately. He was touched up for a hit, a walk and a run on Thursday (which is rare footage recently), but he bagged the save in place of Javy Guerra, who had pitched two days in a row. Jansen is dominant (24 hits allowed in 41 IP), and we have long believed he has closer potential, so we’d advise watching this scenario closely.

Bobby Parnell has emerged victorious from the committee in New York, and has since recorded four straight saves in the past week and change. His save Thursday against Florida was nothing spectacular. The Mets had a 7-2 lead to start the ninth, but the Marlins clawed within 7-4 before Parnell was asked to get the final out. He surrendered an RBI double (the run was not charged to him) before nailing it down. Still, Parnell should be picked up if you have an immediate need for saves. Jason Isringhausen and Pedro Beato will be stuck with holds for the time being. Izzy looked good in the Florida series, tossing two perfect outings with three Ks in two innings. Beato was also sharp in this series, pitching in three of the four games and working hitless ball in each appearance.

Joel Hanrahan is coming off his worst month of the season, recording only two saves to go along with two losses and two blown saves. However, despite his 3.86 ERA in August, Hanrahan’s mark for the season is still a sparkling 1.69. The Pirates also haven’t been playing too well, and won’t give the hard-throwing Hanrahan many more saves until they can break out of their five-game losing streak. His backup, Jose Veras, gave up dingers to let leads slip away in back-to-back games in the last week alone and doesn’t look to have a chance of taking over for Hanrahan. He’s now surrendered more homers than he did all last season, albeit in 15 1/3 IP more.

Fernando Salas’ overall numbers were excellent in August, but his bottom line results were not: two blown saves in six tries. He redeemed himself somewhat with a save on Tuesday against rival Milwaukee and in his last outing (on Thursday), Salas worked two innings for the first time in almost a month. That could affect how much action he sees this weekend. Set-up man Jason Motte has been adding to the pot with 17 holds and his first save of the season on Sunday. The following day, Manager Tony La Russa hinted that Motte, who has not allowed a run in his last 24 2/3 IP to lower his ERA to a sparkling 1.62, could see more save chances going forward. You should have a close eye on this situation as you head into the playoffs. The Cards recalled Brandon Dickson and he got the start Thursday (lasting just 3 1/3 IP), but should spend most of his time in relief. The 26-year-old righty isn’t a big-time strikeout pitcher, but he showed fine command at Triple-A this season.

The Giants have been hurt by injuries this season, especially on the pitching side, and that anguish continued when they put closer Brian Wilson (elbow) on the DL for the second time this season. He was eligible to come off the DL on Wednesday, however he didn’t even play catch for the first time until Thursday, so clearly San Francisco’s biggest character wasn’t anywhere near ready to return. Even when Wilson returns, he will be eased back into save chances, so it may be a while before he makes a Fantasy impact. The current committee in San Francisco is between Jeremy Affeldt, Santiago Casilla, and Sergio Romo. Casilla is the only one who has recorded a save (he had two last week), however Affeldt and Romo are still viable options for saves. We like Casilla in the short term, but now that Romo (elbow) has some off the DL, he’s bound to get his chances as well. The Giants have been spinning their wheels lately, and have now fallen six games behind the Diamondbacks, so they will need a strong effort from their bullpen to have any hope of winning the division.

By Trevor Blake
This entry was posted on Friday, September 2nd, 2011 at 12:55 pm and is filed under BASEBALL, Saving Grace, Trevor Blake. You can follow any responses to this entry through the RSS 2.0 feed. You can skip to the end and leave a response. Pinging is currently not allowed.