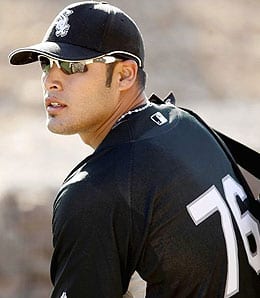 Sergio Santos suffered a shocking meltdown, but he’s bounced back since.

And we’re back with another installment of Saving Grace, this time examining the AL bullpen situations.

Red Sox homegrown talent Jonathan Papelbon has not recorded a save since August 18, and since then Daniel Bard has two holds and has allowed two leads to slip away, suffering his sixth loss of the season Wednesday, when he melted down and walked in two runs, winding up on the hook for five runs in total. Yikes. That’ll sting the old ERA. While Papelbon has not been contributing any saves, in his last six innings he has 10 Ks and has only given up one hit.

Despite a blown save on Saturday when he served up two dingers in the ninth and the White Sox suffered a shocking loss to Detroit, Sergio Santos has four saves and a hold in his last six outings and is one shy of the 30-save mark. With Santos struggling a little, the White Sox turned to former La Crosse Logger Chris Sale, who grabbed his sixth save of the season on Monday. The next day, Santos bagged the save, but keep a keen eye on these two because if Santos falters again, Sale may be given a longer look as closer.

Chris Perez has two saves in the last week, bringing his total to 32, and he hasn’t given up an earned run in over a month, converting nine saves and just missing catching a squirrel with his jacket over that stretch. His ERA is down to almost a full run to 2.65 and with Tony Sipp allowing the lead to disappear when he served up a grand slam on Wednesday, Perez is in no danger of losing his job. Vinnie Pestano, who served up an important insurance run to Detroit on Wednesday, can be used for holds; he got his 20th of the season on Friday.

Jose Valverde has eclipsed 40 saves (he’s now a phenomenal 42-for-42 for the season) for the third time in his career and continues to help lead Detroit to its current nine game lead in the AL Central. Of course, it sure helps having probable Cy Young winner Justin Verlander starting games in front of him. And it doesn’t hurt having Joaquin Benoit mowing down the opposition in the eighth inning to set things up for Valverde. Benoit has not given up a run in well over a month and has recorded six holds and a win in the last three weeks.

So far this month, Jordan Walden has begun to overcome his August struggles. After getting only two saves last month, he already has three in the first week and change of September. He has pitched three hitless innings and on Wednesday tossed a perfect frame for the 29th save of his potential ROY campaign. Scott Downs has helped Walden’s case in the past week holding two of the games Walden saved. By the way, in 25 appearances at home, Downs has still yet to give up a run. Behind Walden and Downs, however, the Halos could probably use some more bullpen depth.

Glen Perkins (forearm) returned to duty Wednesday, but the rust showed as he served up a hit, a walk and a run. He was only Twin reliever to give up a run in the win, but given his holds, strikeouts, wins, ERA and WHIP, Perkins has been a useful AL-only reliever this season. Starter Scott Baker (elbow) is getting closer to returning, and if he does make it back, it will probably be as a reliever for the rest of the season. Francisco Liriano (shoulder) is in the same boat, although he sounds less likely to return this season.

As the season’s end draws near, the Yankees are making their usual late season push for the playoffs. They had won all six games this month before losing in 11 innings on Wednesday and during this stretch, Mariano Rivera has continued his great pitching with saves in all four September appearances, leaving him one save away from the eighth 40-save season of his career. The way things are going, Mo could be in line for his sixth AL Rolaids Relief Man of the Year Award. The rest of Yankees bullpen has also been pitching well lately, and even thought there’s no shut-down lefty, it is currently looking stronger than the Boston bullpen. In the past week, David Robertson has two holds and a save and Rafael Soriano has three holds.

Kyle Farnsworth gave up a game-tying home run to Ian Kinsler in the ninth to blow the save on Wednesday, however southpaw Jake McGee ended up getting the win for the Rays, the 1,000th in franchise history. Farnsworth converted his 23rd save of the season on Saturday and still supports a 2.00 ERA. It’s not a high save total, but the Rays lead the AL with 14 complete games, so their starters tend to finish what they started more than most teams. Considering it was the first save he’s blown since late-June, Farnsworth should still be getting most save opportunities, but if holds are needed, both Joel Peralta and J.P. Howell have two each in the past week. Peralta, however, served up a homer to Mike Napoli on Wednesday that cut the Rays’ lead in half before Farnsworth let it slip away. Howell looked good Wednesday, retiring both batters he faced for his fourth straight perfect outing.

Jon Rauch came back off the DL last week after landing on it August 14 because of an appendectomy. He recorded his fourth hold of the season in his return on September 1, but it’s unlikely he’ll be back with the Blue Jays next year, so they may want to take a look at some other potential closers before season’s end. Casey Janssen, a candidate to close next year, surrendered the lead on Saturday. Meanwhile, Frank Francisco (who had been having trouble holding baserunners, allowing 12 steals in 12 tries before Mike Aviles was caught in an ill-advised attempt on Wednesday to end the game) converted two saves in the last week, while Shawn Camp has won three games in the past week including both of the wins against Boston so far in this series to move to 4-3 on the season. Francisco may continue getting the save opportunities in the short term, but as discussed, the Jays would be wise to use the final few weeks to see if they have a potential closer for 2012. Dustin McGowan tossed four innings of relief on Tuesday in his first major league appearance in three years, but he may be moved into the rotation shortly.

By Trevor Blake
This entry was posted on Thursday, September 8th, 2011 at 11:49 am and is filed under BASEBALL, Saving Grace, Trevor Blake. You can follow any responses to this entry through the RSS 2.0 feed. You can skip to the end and leave a response. Pinging is currently not allowed.