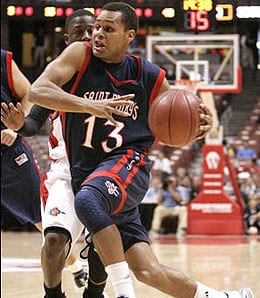 Can Roy Williams lead UNC past his ex-team, or will Kansas force him to assume the position? For the first time in the history of the NCAA tournament, the selection committee nailed it. Four teams left; four number one seeds. The closest to a mid-major scare was Davidson, who got barely brushed aside by Kansas […]

When he wasn’t airing out his abundantly hairy pits, former NBA player Dell Curry was canning treys; now his son Stephen is building his own legend. There always seem to be those players that step up out of nowhere in the tournament. The guys who have you scratching your head while saying “Wait, who is […]

It’s awesome, baby!!! This is where Cinderella happens. This is where draft stocks soar. This is where champions are made. As Dick Vitale would say, “It’s awesome baby!” Yes, March Madness is finally here and office pools and bracket battles are starting all across the country. Who will win it all? Who will come up […]

Gonzaga is led by co-WCC Player of the Year Derek Raivio. GONZAGA BULLDOGS SKINNY: This team has had to vault over plenty of obstacles, yet another WCC Championship has the Gonzaga Bulldogs headed back to the tourney for an astonishing ninth straight year. Seeded 10th in the West, the Bulldogs will look to get past […]