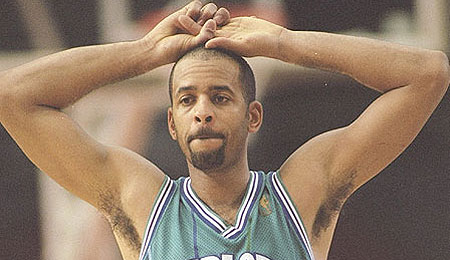 When he wasn’t airing out his abundantly hairy pits, former NBA player Dell Curry was canning treys; now his son Stephen is building his own legend.

There always seem to be those players that step up out of nowhere in the tournament. The guys who have you scratching your head while saying “Wait, who is this guy?” The 2008 head scratcher for many of you (myself included) is Stephen Curry of the Cinderella Davidson squad. In Davidson’s first two games against Gonzaga and Georgetown, Curry has almost single-handedly carried his team to victory. Against the Bulldogs of Gonzaga, he poured in a game high 40 points, and followed that performance with 30 points in Davidson’s upset of number two seed Georgetown. Wow.

So maybe you say the name sounds familiar. Probably true. His dad was Dell Curry, long-time NBA player and three-point specialist. Regardless, I’m sure Stephen Curry was not on too many Players-to-watch lists before the tournament started. But after scoring 70 points in two contests and leading his Wildcats to the Sweet 16, he is plenty well known now. He’s even being projected as a late first round, early second round pick in the NBA draft for his uncanny ability to knock down threes.

March Madness. Where the unknown become the known! [Of course, long-time readers of RotoRob know that we touted Curry in the lead up to last year’s tourney.]

Okay, call me a homer (it has to be obvious by now that I’m a Coug through and through), but regardless of my loyalties, this has to be one of the most intriguing games of the Sweet 16. You have the ultimate shutdown defense in Wazzu, and the ultimate high powered offense in UNC. Both teams have absolutely destroyed their first two tournament opponents. Here’s a brief recap of what happened in these teams’ first two games:

Wazzu looked shaky in its first round victory of Winthrop. And by shaky, I mean for a short 20-minute period in which the Cougars went into the half tied at 29. But that disappeared quickly as they outscored Winthrop 42-11 in the second half to win 71-40. Ouch. Talk about defensive prowess.

In its second contest, Wazzu never looked shaky against Luke Harangody and the high powered Notre Dame Fighting Irish. Notre Dame jumped out to a 5-0 lead early on, but that would be its only lead in the contest as Big East Player of the Year Harangody was held to ten points for the game. Final score, Wazzu 61 Notre Dame 41. For those who are counting, that represnted only half of Notre Dame’s season average point wise.

On to UNC. The Tar Heels have not played a game in doubt yet, as Tyler Hansbrough and company steamrolled their first two opponents. After earning the right to get bitch-slapped by UNC by winning the play-in game against Coppin “A Feel” St., Mt. St. Mary’s was, as expected, bitch slapped. It was not a close contest as Hansbrough and Ty Lawson led the team with 21 points apiece in the Heels’ 113-74 victory. Wow. That’s scary good offense right there.

Many people thought UNC would get a much harder challenge from the tough SEC Arkansas squad. Nope. The Tar Heels once again scored in triple digits in a 108-77 victory, this time led by superstar guard Wayne Ellington. What is even better is the squad played everyone on their bench, with all 15 players seeing some action. Talk about a stacked team.

So why is this such a great game? Mostly because it is the best offense versus the best defense in the nation. But also because of the insane amount of future NBA talent in the game. UNC’s Hansbrough might potentially turn pro after this season, as may backcourt stalwarts Lawson and Ellington. All look to be first round picks. For Wazzu, Kyle Weaver hopes to continue to soar on draft boards with his defensive prowess, and what better an opportunity then to face the number one team in the tournament? Also, senior guard Derrick Low will look to continue a strong tournament and move up his draft status from mid second round to early second round selection.

The final reason it will be the best Sweet 16 game? Because I’m flying across country to see it, so damn it, it better be!

[Note from the editor — RotoRob has been a UNC fan since he started following college hoops many a year ago, so this matchup pits two of our staff’s teams against one another. All I can say, Daniel, is you better watch your back, or else I will arrange to have extremely flat beer served at your next kegger. I might even confiscate your bong.]

Luke Harangody is an intimidating presence in the post. (AP Photo/Brian Kersey) [Note from the Editor: This is the 1,000th post in the history of RotoRob.com. A quick thanks to all our readers, all our writers and the rest of Team RotoRob. Okay, enough blathering…on to some college hoops. By the way, stay tuned for […]

The Bench Warmer: Collin(s) all ‘Canes

Reggie Evans, right, could be in jeopardy of losing his “The Collector” nickname if Dwayne Collins makes it to the NBA. (AP Photo/Rusty Kennedy) The University of Miami (Florida) has always been known as a football powerhouse. The Hurricanes have rarely been known as a threat in basketball in the tough ACC, but after last […]

Lester Hudson has been doing it all for UT-Martin. (Photo: Tennessee-Martin) The University of Tennessee-Martin is not exactly a powerhouse school, but it is a Division I program. Regardless of how little known the team is, Lester Hudson is letting himself be known. The 6’3″ junior guard from Memphis, Tenn., is averaging 25.8 points per […]

Stefon Jackson has had to overcome a lot to get where he is. (AP Photo/Lance Murphey) There are plenty of success stories of players in college basketball. Many have gone through trials and tribulations that most of us could not endure. UTEP guard Stefon Jackson is no different. Jackson constantly tells everyone how much he […]