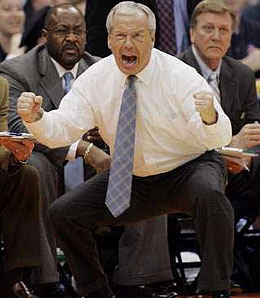 Can Roy Williams lead UNC past his ex-team, or will Kansas force him to assume the position?

For the first time in the history of the NCAA tournament, the selection committee nailed it. Four teams left; four number one seeds. The closest to a mid-major scare was Davidson, who got barely brushed aside by Kansas in the Elite Eight. That leaves just four big time programs in Kansas, UNC, UCLA, and Memphis.

With the exception of the Kansas-Davidson game, the other three Elite Eight games could hardly be called close. Number two seed Texas got blown out by Memphis (the trendy number one seed who everyone picked to lose). UCLA produced its first blowout since the opening round as the Bruins dispatched Xavier by 19 points. Finally, UNC controlled the number three seeded Louisville Cardinals as the Heels punched their ticket to the Final Four.

So onto San Antonio for the finale of the big dance, where scouts will drool at the talent and millions of eyes will be enthralled with their television sets (more than usual, that is). And this writer will be rooting against the Tar Heels who easily dispatched my Cougs (WSU) in the Sweet 16. But that’s beside the point! [Note from the editor — there’s no accounting for taste.]

Tar Heels coach Roy Williams once led the Jayhawks of Kansas to four Final Fours (say that quickly five times). Now, he has moved on to RotoRob’s favourite, Tar Heel Nation, where he has UNC in the Final Four against his former school.

If you did not know any better, you would think Kansas is the only vulnerable team entering this Final Four as, previously stated, it had the only close Elite Eight contest. But not so fast. The Jayhawks played the Cinderalla of the tourney, scorching Davidson Wildcats (also of North Carolina) featuring scoring machine Stephen Curry. In last week’s column, I told you to watch out for Curry and it is hard to say he disappointed, pouring in 25 points against Kansas. But the Jayhawks were able to avoid a last second upset as a desperation three by Davidson clanged off the rim at the buzzer.

Davidson was the surprise seed of the tournament, and was really one of the only Cinderellas. But the fact that Kansas could overcome the Wildcats in itself shows that the Jayhawks are real. Coach Bill Self finally led his squad to the Final Four after failing in all his previous tournaments as Williams’s successor.

Junior guards Mario Chalmers and Brandon Rush played stifling defense on Curry, and despite scoring 25, Curry was held to just 9-for-25 from the field. Chalmers also contributed 13 points and three rebounds while Rush poured in 12 points and a nice seven rebounds.

Kansas has above average guard play so can match up well with the Tar Heels in the back court, but the question is if its big men can hang with National Player of the Year Tyler Hansbrough. Sasha Kaun had a solid game against Davidson, pouring in 13 points on 6-for-6 from the field, but I’m not quite sure he is quick enough to guard Hansbrough.
UNC just might have too many offensive weapons for Kansas. Not only do the Tar Heels have Hansbrough, but guards Wayne Ellington and Ty Lawson are a lock for double-digit points every game as well as a probable first round selections if they were to enter the draft this April. Throw in with super sixth man Daniel Green and you have no weak spots up and down the Tar Heels’ roster.

This will be a great game, but my bold prediction is Tar Heels walk away with it.

For making three Final Fours in the last three seasons, the Bruins are not getting a ton of respect. Coach Ben Howland has his strongest team out of all the recent Final Four runs, and the Bruins look poised to make more noise in the Finals than they did last season.

Led by guard Darren Collison and freshman sensation Kevin Love, this team is tough. Xavier made a somewhat surprising run to the Elite Eight where it was just absolutely controlled by the Bruins of UCLA. Love chipped in his typical 19 points and ten boards while Collison chipped in with 19 points and five assists. The Bruins’ stifling defense also held Xavier to only 36 per cent shooting from the field. UCLA has a solid rotation with Russell Westbrook, Luc Richard Mbah a Moute, and Josh Shipp joining Love and Collison. All of these players can score, and all of these players can play extraordinary defense as well. They are athletic enough to run with Memphis but, most likely, will try to control the tempo and play a much slower pace than Memphis likes to play.

Memphis has really surprised so far in the tournament despite being a one seed. On ESPN’s predictions of the Sweet 16 last week, all eight analysts picked Memphis as the number one seed most likely to lose. Well, it didn’t. In fact, it wasn’t even close. The Tigers blew out Michigan State by 18 points which was not even a real indication of how lopsided that contest was. Memphis actually led 50-20 at the half in that game! The Elite Eight pitted them against Texas, a game which most thought the Tigers would lose. That did not happen either as they destroyed the Longhorns by 18. In that contest, do-it-all guard Chris Douglas-Roberts chipped in 25 points while freshman Derrick Rose tossed in 21 points. Texas was not able to rally and handle the amazing length of the Tigers.

If you’re a fan of the Tigers, you better enjoy your last glimpse of Rose. More than likely, he’s bolting to the NBA after this season and with good reason as he will be one of the top picks in the draft. With a backcourt of Rose and Douglas-Roberts, Memphis can score with anyone in the nation. Throw in the horses in the middle, Joey Dorsey and Robert Dozier, and you have a tough starting squad to defend. If Memphis gets into an uptempo game with UCLA, it has the edge and might be able to take the game from the Bruins. But if the game is close at the end, the Tigers might be in trouble as they were the third-worst free throw shooting team in Division I basketball this season.

Because I’ve seen UCLA play about 20 games this season (however, I’m not a UCLA fan) I know the squad pretty well and know how great of a coach Howland is. That’s not to take anything away from John Calipari (an outstanding coach as well), but UCLA has the experience from two previous Final Fours and I think it will eventually show as the Bruins will squeak by a very difficult Tigers squad.

I’m calling UNC and UCLA for the championship in what will be a great game. But really you can’t go wrong with any of these four teams making the championship. They are four absolutely quality teams that NBA scouts will be going nuts over during this championship weekend.

If it is in fact UNC and UCLA, I think Love will be the best matchup of the year against Hansbrough and UCLA will pull off the victory giving Love a championship in his first and (most likely) only season in college.

By Daniel Olson
This entry was posted on Wednesday, April 2nd, 2008 at 12:02 pm and is filed under BASKETBALL, College sports, Daniel Olson, March Madness Preview. You can follow any responses to this entry through the RSS 2.0 feed. You can leave a response, or trackback from your own site.