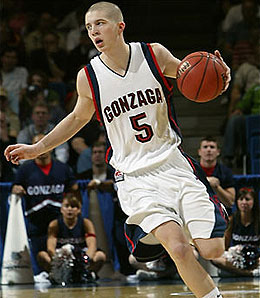 Gonzaga is led by co-WCC Player of the Year Derek Raivio.

SKINNY: This team has had to vault over plenty of obstacles, yet another WCC Championship has the Gonzaga Bulldogs headed back to the tourney for an astonishing ninth straight year. Seeded 10th in the West, the Bulldogs will look to get past the Hoosiers as they hope to best last season’s Sweet 16 showing. The ‘Zags won 11 of 14 in conference play and proved they were capable of huge wins by beating the Tar Heels, the Longhorns and the Cardinal. While there was some question whether Gonzaga would have been asked back had it not taken the WCC, a 77-68 win over No. 2 Santa Clara made that notion moot. The school heads into the tourney on a five-game win streak.

HISTORY: This is nine years in a row and 10 overall in the tourney for Gonzaga, 12-9 overall in NCAA play. Gonzaga built its legend as a basketball power between the years of 1999 and 2001, when it made it at least as far as the Sweet 16 every year, despite never being seeded higher than 10. Again a 10 seed this year, this is the lowest rank for Gonzaga since 2001, so its streak of not losing in the first round since 2002 could be in danger.

STRENGTHS: This team can shoot, whether from the floor, beyond the arc or at the charity stripe, ranking in the top 21 in the country in all three categories. Gonzaga protects the pumpkin well and is also adept at limiting its opponents’ shooting (25th best at 40.3 per cent).

WEAKNESSES: Perimeter defense is an issue (opponents shoot 34.3 per cent from 3-point range; that’s 148th in the country) and if the team’s big gunners go cold, Gonzaga could be in trouble given that this is not a team adept at hooking each other up (just 46 per cent of the Bulldogs’ baskets were assisted, 243rd overall in the nation).

KEY PERSONNEL: Senior PG Derek Raivio has taken more and more of a leadership role in terms of offense as first Ronny Turiaf and then Adam Morrison graduated to the NBA ranks. The son of Rick, one of the best players in the history of the University of Portland, Derek did his old man proud with a WCC-leading 18.2 PPG while adding 2.6 APG. The WCC co-player of the year and tournament MVP lived up to his reputation as a big-game player, and when the team needed him most, Raivio stepped up, scoring a career-high 28 points in the WCC Championship game despite hurling chunks in the second half (and no, he did not have the flu nor was it anything he ate). Heavily recruited out of high school, Raivio averaged 1.5 steals per game and shot very well this year (45.5 per cent from the field). Sophomore shooting guard Jeremy Pargo, brother of Jannero, finished third in the WCC in assists with 4.6 per game. He stepped up to play a major role this year and combined with Raivio to give Gonzaga a very impressive backcourt. Smart and athletic, Pargo also averaged 1.5 SPG and showed his brother’s shooting touch (49.5 per cent from the floor).

INTANGIBLES: As mentioned, Gonzaga had to overcome a lot this year, and like its namesake, it stubbornly ploughed through. Not the least of its hurdles was the loss of sophomore forward Josh Heytvelt, one of conference’s top scorers and the team’s best rebounder, inactive since February 5 after being charged with felony possession of a controlled substance. He’s been suspended indefinitely. The team had to endure a very difficult non-conference schedule, tough enough that it dropped out of the Top 25 for the first time in a few years. Gonzaga also saw its 50-game home winning streak (the longest in Division I) snapped. And the Bulldogs didn’t exactly run away with the WCC, finishing a mere one game ahead of Santa Clara, yet in the end they won their eighth WCC title in nine years.

By RotoRob
Tags: 2007 March Madness
This entry was posted on Wednesday, March 14th, 2007 at 7:00 pm and is filed under BASKETBALL, March Madness Preview, RotoRob. You can follow any responses to this entry through the RSS 2.0 feed. Both comments and pings are currently closed.