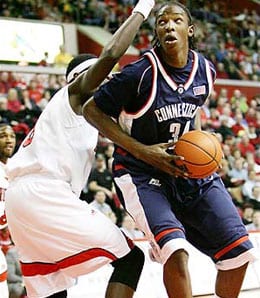 Hasheem Thabeet will be an immediate defensive force in the NBA.

Every year, the NBA season comes and goes, and with it arrives the NBA Draft. College students and players from abroad declare their eligibility for the draft and NBA scouts and front offices set up their “war room” to rank the players on their own draft board. Here, I am going to rank the top 10 as I see them, leaving out their probable or possible NBA teams because until the May 19th Draft Lottery, we don’t know who is picking where.

1. Blake Griffin, PF, Oklahoma Sooners: When you look at which player in this draft is the most NBA ready, Griffin’s name has to be No. 1 on that list. You see, you have to take a closer look at his stats to truly appreciate how good this kid looks on paper: Griffin had the most in-the-paint baskets per game at 7.9, he shot 75.5 per cent on those short range attempts and he was fouled 18 per cent of the time when he touched the ball in the low post. Griffin is a strong and athletic PF that should go No. 1 overall regardless of who gets the pick.

2. Hasheem Thabeet, C, Connecticut: At 7’3”, this kid is a monster around the basket. He finished with 10.8 rebounds and 4.2 blocks per game last season, but the 13.6 PPG is a little disappointing considering his low-post presence. He compares to Dikembe Mutombo because of his rebounding/shot blocking and lack of offensive ability. Guys with his size and defensive abilities are hard to find, so going No. 2 is not a bad call.

3. Jordan Hill, PF, Arizona: Hill has developed nicely throughout his college career and his ideal size and wing span make him an interesting pick at No. 3. He has a very good jumping ability, which only enhances his athleticism. The problem with Hill is his substandard free-throw shooting (65.4 per cent), his 2.9 turnovers per game this past season and the way he seems to try to power his way to scoring as if he was Shaquille O’Neal instead of Jordan Hill.

4. James Harden, SG, Arizona State: When people talk about Harden, you would think you were listening to someone describe a point guard, but Harden plays the two-guard instead. His strengths are his ability to shoot, pass and handle the ball, but at just 6’5”, he is a bit small for an NBA SG. Harden also could be a liability on defense as he didn’t stand out in college and will be facing better competition once he reaches the pros. Look for more of a Manu Ginobili type of player…think sixth man.

5. Ricky Rubio, PG, DKV Joventut (Spain): Rubio is an 18-year-old PG out of El Masnou, Spain. The knock on him has been his inability to create his own shot, his accuracy when shooting and when he does manage to create contact he expects to get the “Jordan treatment” from the refs. The reason I rank him at No. 5 is because at his young age he is already playing against more mature and much better competition overseas and should be able to improve his skills with time in the NBA. I foresee another Darko Milicic, to be honest.

6. DeMar DeRozan, SG, USC: A lot of mocks have Brandon Jennings going here, but why? The kid went to Europe out of HS and managed just 19 minutes and 7.6 PPG, hardly worth getting excited over. DeRozan will be a project because he still needs to become more consistent in all facets of his game. His greatest attribute is his athletic ability which has been compared to that of Vince Carter.

7. Brandon Jennings, PG, Lottomatica Roma (Italy): Even though I said I wouldn’t rank players with their prospective team, Jennings is one that gets his rank because of the two teams most likely to pick here (Memphis and Golden State). Being that he played in Europe last season, teams will take a chance on him even though he shot just 38.7 per cent from the field and turned the ball over 1.2 times a night while playing under 20 minutes. Jennings is better suited for the And 1 tour than he is the NBA tour.

8. Tyreke Evans, SG, Memphis: Evans was hyped up quite a bit in high school and that causes many players to lose focus. The good thing about him is his natural basketball skills and ability to score almost at will. But, Evans is one of those people whose greatest attribute is also his downfall in that since basketball comes so easy to him, he seems to take a lazy attitude at times on the floor. He is a solid combo guard that can become a star if he works on improving his game and not relying on his athletic ability to overpower the competition.

9. Ty Lawson, PG, North Carolina: Lawson lead the Tar Heels to a national championship, which means someone is bound to take this quick PG in the top 10. He has amazing speed and quickness to go with his court vision, but standing just 6’0” tall will hamper him in the NBA. He can’t create his own shots and will have a problem defensively against bigger NBA players, but he can shoot the longball, averages 2.1 steals and doesn’t turn the ball over a lot for a PG.

10. Stephen Curry, SG/PG, Davidson: I don’t really care for Curry as a player (I am thinking he’s the next Steve Kerr), but his 28.6 PPG average will raise some eyebrows. He makes smart decisions and can find his own shot, but at 6’2”, he is as tall as a small PG and trying to play the SG role. He will be a problem on defense and will have trouble finding that shot that made him so fearless in college, so he better get used to coming off the bench and being a situational player. I would much rather see someone like Earl Clark or Gerald Henderson go here.

Dear RotoRob, I am being offered Tayshaun Prince for Devin Harris. Do you think Prince can continue his amazing lines? I am not sure if this trade is worthy or not. Thanks for any help. Amalia Amalia, I am certain Prince will continue to flourish with Allen Iverson in and Chauncey Billups out. In fact, […]

Dear RotoRob, It’s that time of year again and I could use your sage advice. I just had my fantasy basketball draft. The format is 12 teams, H2H with FG percentage, FT percentage, 3-pointers made, Points, Rebounds, Assists, Steals, Blocks and Turnovers. We start: G, G, F, F, C and two utility spots (with four […]

We continue the 2008-09 RotoRob NBA Draft Kit with a special treat today, as James provides us with his picks for the top 10 players at every position, plus some busts and sleepers. We’ll have deeper cheat sheets and a more complete sleeper list coming shortly. As most fantasy owners know, the most important part […]

The 2008-09 RotoRob NBA Draft Kit continues with the first part of our look at this year’s rookie class. Derrick Rose, PG, Chicago Bulls: Rose has the physical skills to drive to the hole, but he was more of a penetrate and kick-out player in college. Rose will be a solid three-category guard, but if […]