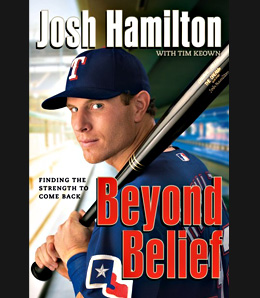 I have never been a baseball prospect, nor I have never been addicted to drugs. But, the way Josh Hamilton recounts both parts of his life in his new book Beyond Belief, made me want to reach out to the child in the early years and shake the adult in the later years. The story of Hamilton and what he went through to get back into baseball, is discussed in sports circles like the man is a myth. Hamilton’s autobiography is told with a passion and brutal honesty that is rarely seen in pro athletes today.

The book grabbed me from the opening page as Hamilton recalled his childhood in Raleigh, N.C. — living in the country, playing baseball every day, growing up with sports being what you did rather than what you wanted to do. The book even made me laugh as Hamilton told of chasing foul balls at baseball games to get a free hotdog from the concession stand. While Hamilton grew up in North Carolina, and I grew up in Trenton, Texas, our stories could have been told by the same person and been pretty accurate in both cases.

From the time Hamilton was six years old, he was always a step above his peers. He could throw harder, hit farther and make plays in the field that made the Tar Heel Little League move him up a level. He didn’t know it at the time, but he would be the first player they ever bestowed with such an honour. Hamilton’s childhood was filled with fond memories of playing the game he loved and spending time with the ones he loved — his family.

In the opening chapter, Hamilton tells a story about pitching to a kid in the Tar Heel League. During the first at bat, he threw behind the kid on accident. The next time up the opposing boy was mortified and cried outside the batter’s box until a coach convinced him that Hamilton wouldn’t hit him. What do you think happened? Hamilton dotted him right between the shoulder blades. The kid dropped, screaming “He hit me! He hit me!” and “I can’t move!” Years later Hamilton’s dad met the kid on a job site, and the now grown man, said “Tell your son I never played past little league after he hit me. That boy scared me to death.”

Hamilton even recounts an episode on the field when he was in Class-A ball in the Tampa Bay organization when he saw the face of a demon in the clouds during a game and after the game saw the image of Jesus Christ on a television in his hotel room. Some may think Hambone (the nickname his grandmother gave him) is crazy, but I tend to side with him in believing that there was a connection between the two events and a message was being prophesied to him. He didn’t know it at the time, but a tough road was ahead for the bright eyed 18-year-old that had his parents traveling with him full time.

Hamilton and his family were involved in an automobile accident with a dump truck that left his father with a fractured skull, his mother with whiplash and Hamilton with a back pain that could not be explained. The team ran him through every test imaginable and it wasn’t until a season later and a trip to a back specialist that the source of the pain was discovered. While a small pocket of fluid caused the pain in his back, the pain in his soul could be attributed to his family not being near him, loneliness that manifested itself in regular trips to a tattoo shop where he would sit for an entire day and get two or three tattoos per day, leaving a permanent reminder of the pain.

It was at that very shop where Hamilton met the individuals that would lead him to try cocaine for the first time. He later said “they weren’t bad people, they just did bad things.” Sometimes we know what we are doing is wrong, but our desire to drown our pain or fit in with others is so great that we ignore the red flags thrown in our faces. Twenty-plus tattoos covered his body and with cocaine coursing through his veins, Hamilton’s once bright aspirations of playing pro ball were quickly fading.

Something had to happen or this person, with God-given talent, would be lost to the world forever. That saviour would come in the form of a woman in her seventies who was barely five feet tall. Hamilton went to his grandmother’s house — the one place he always knew he could go when he felt he needed to escape — at a time when he had nowhere else to turn. His family was leery of helping him because of all he had put them through up to this point, but his grandmother would never turn him away, or so he hoped. At her house, after using drugs in her house and seeing the hurt in her eyes, Hamilton reached out to Jesus and asked him to do with his life what he wanted. From that day on Hamilton was drug free.

Hamilton went on to get selected by the Cubs in the Rule 5 draft and sold to the Reds that same day; he made the Cincy big league roster out of Spring Training, and enjoyed rookie season. In the offseason, he was dealt to Texas, and this year enjoyed an even finer campaign, highlighted by his incredible show at the Home Run derby, when he smacked a record of 28 long balls in the first round.

Hamilton’s career is still young and the future is bright. What could have been has been replaced with what is now and the Rays have to be wishing they never left him unprotected in the Rule 5 draft.

Whether it is a sad story with a happy ending, a story of what not to do in life, or just a story of how life can deal you many obstacles and it is up to you to work around them, the tale of Josh Hamilton is a story that could make a grown man cry. What he had to overcome in order to claim his rightful spot on a major league roster is miraculous. Hamilton’s story is one of an individual trying to rein in something that was out of control. It wasn’t until he turned his life over to God that all things became possible.

Check out the Fantasy Forecast, which is updated every Monday morning.

By James Morris
This entry was posted on Wednesday, October 8th, 2008 at 3:02 pm and is filed under BASEBALL, Book review, James Morris. You can follow any responses to this entry through the RSS 2.0 feed. Both comments and pings are currently closed.