The Wire Troll: Welcome Back, Carter 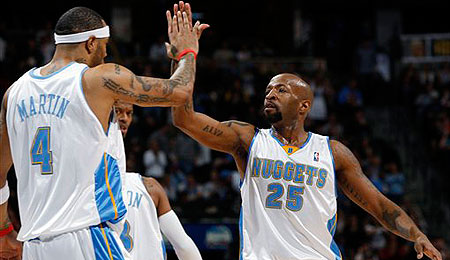 Anthony Carter is gaining the respect of his teammates in Denver as the Nuggets’ only PG at the moment. (AP Photo/David Zalubowski)

You know, not every week is a good week to pick up a free agent. But, lucky for you, this isn’t one of those weeks. This is actually a fairly good week to be trolling the waiver wire to help replace those players who are doing next to nothing.

Anthony Carter: Any time you are the only point guard on a team’s roster, it is safe to say your starting job is safe! Carter is all Denver has since Chucky Atkins is done for a minimum of two months following hernia surgery. Carter had 21 points and 11 assists on Friday night, plus he has had three double-digit assist performances in his last four games. I feel very good about picking up Carter off the waiver wire and I think he should be owned in all formats. Denver will likely try to make a move to add a PG, but for now, Carter’s the man.

Martell Webster: Webster has been averaging about 26 minutes per game so far this year and over the past week, he’s been on fire with 21 points, four rebounds and two assists per game. Webster is available in almost all my leagues and I think he could be a solid short-term option capable of providing points off the bench with a small amount of rebounds as well. Although Webster struggled against the Raptors today, he had managed at least 16 points in back-to-back games prior to Sunday.

Nate Robinson: The Mighty Midget is one person who is benefiting from the Knicks’ line-up change. Robinson is averaging 2.5 threes, 18 points, four rebounds, five assists, and one steal per game over the past week. The Knicks have played six games in January so far and Robinson has averaged 32 minutes per game. Everyone has a chance to shine on the Knicks, so Robinson is as good of a bet right now as Zach Randolph is! Robinson looked fantastic on Friday, pouring in 24 points off the bench against Toronto.

By James Morris
This entry was posted on Sunday, January 13th, 2008 at 4:43 pm and is filed under BASKETBALL, James Morris, The Wire Troll. You can follow any responses to this entry through the RSS 2.0 feed. You can leave a response, or trackback from your own site.