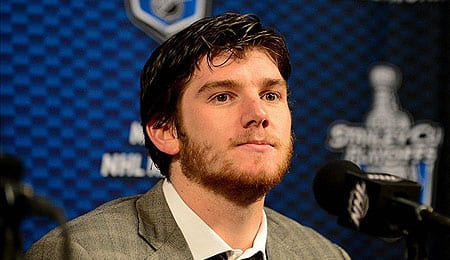 If the Kings win the Cup, choosing the MVP may be Quick work.

Okay, so with the Los Angeles Kings and New Jersey Devils about to kick off the Stanley Cup Finals starting Wednesday night, the NHL playoffs are just about done. We get it… you’re probably pretty much over hockey by now.

That’s why we’re teaming up with our good friends over at Microsoft and CBC to give our readers a reason to stay engaged through the remainder of playoffs.

How’d you like to win a prize pack (valued at $190) that consists of an Official NHL Hockey Night in Canada jersey (it looks like this) and a copy of NHL 12 for Xbox 360 (which we reviewed last summer)?

Okay, now that we’ve got your attention, here’s the fine print.

RULES: To enter, leave us a comment below telling us who you think will be the Conn Smythe Trophy winner as this season’s Playoff MVP. We will pick a random winner from all the correct entries. The deadline is the end of the first period of the final game of the Stanley Cup Finals (which, of course, we don’t know yet what exact game that will be). Note: make sure you put your correct e-mail address into the system so we can contact you if you win.

Now for those of you hardcore hockey fans that can’t get enough of the game, Microsoft and CBC’s digital team have been working together for a couple of years on Playoff Pulse, a new one-stop resource for all things playoff hockey. Developed by CBC on Microsoft’s IE9 (and apparently best experienced on that browser to get the three-minute game video summaries), the site includes:

Check it out when you get a chance, and in the meantime, enjoy the Stanley Cup Finals (go Kings!) and best of luck in this contest!

By RotoRob
This entry was posted on Tuesday, May 29th, 2012 at 11:24 am and is filed under Contests, HOCKEY, RotoRob. You can follow any responses to this entry through the RSS 2.0 feed. Both comments and pings are currently closed.