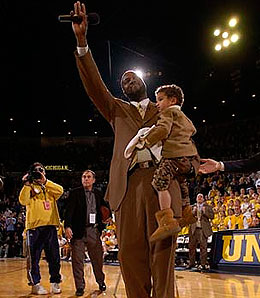 As the curtains close on the 2007-2008 NBA season, Next Generation reflects on the top ten freshmen. Working backwards to build the greatest suspense possible, Part One deals with the rookies that rank ten through six. Part Two will cover the top five, which includes the rookie of the year. Note that we’ve taken into consideration our perspective of the player’s long-term impact when compiling these rankings.

10. Al Thornton, LAC – Thornton came on strong after the All-Star break, averaging 16.4 PPG. He actually ranks lower on this list because at 24 years of age, he is slightly older than most others and I’m uncertain just how much better he will get.

Thornton is a fantastic athlete that can score, but takes a lot of shots to get his points. It remains to be seen how he will manage alongside a healthy Elton Brand, Chris Kaman and Tim Thomas – um, well, maybe just Brand and Kaman.

9. Jeff Green, SEA – Yes, his 27-point, ten-rebound performance in his last game of the season was a gem. Yet, as I’ve previously written about Green, he reminds me of Richard Jefferson. RJ, like Green, came into the league at 21 years of age; both are known for their all-around game and superior athleticism; and both were traded on draft day. When comparing their rookie seasons, you can see just how similar their games actually are:

So, what does that mean? Assuming that Green’s career takes a similar path as Jefferson’s has, the Sonic youngster will have much more value to his NBA team than he will to fantasy basketball teams. While Jefferson’s range has greatly improved over the years, his lack of steals, rebounds or threes from the forward position leaves a lot to be desired. I have little confidence that Green can do much better than Jefferson, and that means, at best, a $20 fantasy basketball player two to three years down the line.

8. Yi Jianlian, MIL – It’s tough to defend the post All-Star numbers, in which he averaged only 5.0 PPG and 3.5 RPG. However, there are some things to like about Yi. Athletic seven-footers with precision from the outside don’t come around often, and the potential is there for Yi to contribute in virtually every category. The best reason to hold onto Yi in keeper leagues is the similarities of the 1998-1999 season of Dirk Nowitzki, at which point both players entered into the NBA at 20 years of age (we think).

Thanks to his 7′4″ wingspan, Yi’s steals and rebound contributions should continue to rise as he becomes more accustomed to the NBA.

7. Joakim Noah, CHI – Noah recently delivered a stellar five-game stretch in which he averaged 12.6 points, 8.8 rebounds, 2.4 blocks and 1.2 steals, along with a 56.1 FG percentage and 89.5 FT percentage. Most recently, his 18-point, 15-rebound and four-block performance might have been the “Noble One’s” way of crashing the party. A talented passer and a relentless rebounder, Noah stood to gain the most when the Bulls found someone crazy enough to take Ben Wallace’s sizable contract and diminishing skills (thank you, Danny Ferry).

The most positive indication that Noah will contribute regularly is the averages he posted in the month of April – 10.4 PPG, 6.5 RPG, 1.6 SPG and 1.4 BPG while shooting over 50 per cent from the field. His rookie season mirrors last year’s rookie season of Paul Millsap.

Noah’s progression, just like that of Millsap’s, will ultimately be determined by playing time and where he ranks on the depth chart.

6. Thaddeus Young, PHA – The rookie from Georgia Tech has turned the proverbial corner since Kyle Korver was traded to the Utah Jazz. Turning the keys of the offense over to Louis Williams would create an up-tempo style of play in which the athletic Young would thrive, with more opportunities to beat his man down the floor for easy buckets. Young is missing an outside game, yet still achieved a field goal percentage of 53.8. Just to give you a taste of next year’s potential, he played 35 minutes in the regular season finale and posted 18 points, five assists, four rebounds, two steals, two three-pointers while shooting 58.3 per cent from the floor and going perfect from the line.

Stay tuned for the top five, and feel free to e-mail me with your top five. I’ll gladly debate your selections.

Next Generation: Not Green with Envy

Many believe that with Mike Bibby and his ink-stained body arriving in Atlanta, Al Horford’s value should skyrocket. Last week, I debuted my Next Generation five-tier ranking system for NBA rookies. For those that did not have the opportunity to read it, I developed a system that sorted through the first-year players and helped to […]