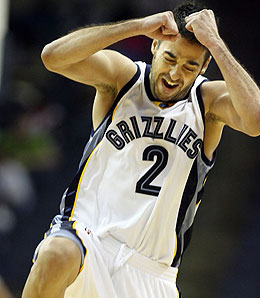 During last week’s first annual Rookie Wall Seminar, I took to task Kevin Durant, Yi Jianlian, Jeff Green, Al Horford, Sean Williams, Juan Carlos Navarro and Rodney Stuckey. My concern, at the time, was that these six NBA rookies were approaching “the wall.” Two of these guys responded with what I would consider to be solid weeks since the tongue-lashing.

In the same article, I handed out praise to Al Thornton, Jamario Moon and Thaddeus Young. Every one of them followed up with a miserable week.

Such is the expectation of a rookie season in the NBA – up one week, down the next. The seemingly truest definition of an NBA rookie is that, in almost every case, no one has a freakin’ idea what the heck to expect from one week to the next.

From a fantasy basketball perspective, this rookie class can be divided into a few categories. They are:

Let’s take a look at the two rookies that have been competing for Rookie of the Year honours, and figure out where they belong in this week’s edition of Next Generation.

Kevin Durant: Everyone has knocked Durant off his perch, and placed Al Horford in pole position for this year’s NBA Rookie of the Year. As bad as Durant’s field goal percentage has been this season, and as strong as Horford’s play has been of late, I honestly can’t see how anyone worthy of their paycheck can compare the two. Sure, Durant has been miserable from the floor, clicking at a woeful 40 per cent this season. Yet, at this very moment, Durant’s 19.4 PPG ranks him 20th among all NBA rookies in the past 25 years. It’s also worth noting at how eerily similar his rookie averages compare with those of Jamaal Mashburn’s:

Mashburn had a solid, if not spectacular NBA season, ultimately wrecked by injuries. Where Durant fans have hope is that he is two years younger than Mashburn was in his rookie season. Durant has also not filled out his frame – I’ve seen way too many instances in which he was muscled into shots that he didn’t want to take. It’s because of Durant’s across the board potential and likely rigorous off-season routine that I see no reason not to consider him a Future Stud.

Al Horford: Everyone is saying such nice things about Horford. He comes to play every night, he plays like a veteran, blah, blah, blah. When you look at his numbers, and put aside that he brings it every night, is there really much to be excited about? Through 56 games this season, Horford has had major up and downs. Yet, one thing that is glaringly absent is the blocks – one per game. Typically, shot blockers make their presence known right out of the gate. It’s not something that you figure out how to do with experience – either you’re a shot blocker or you’re not. What I’m getting at is that Horford isn’t. If you’re a Hawks’ fan, which I doubt you are, you may not want to look at this next comparison.

Both players entered their rookie seasons at age 21, and had similar height and weight measurements. These similarities do not bode well for Horford. Consider him to be a Solid Performer Worthy of a Starting Role, but nothing more. Horford may help fill a centre position in deeper leagues, but in keeper leagues he is not the guy I’d be building around.

In the weeks to come, I’ll be placing more of the rookies into the five categories and looking at additional historical comparisons.

By Steve Simon
This entry was posted on Tuesday, March 4th, 2008 at 4:26 pm and is filed under BASKETBALL, Next Generation, Steve Simon. You can follow any responses to this entry through the RSS 2.0 feed. You can leave a response, or trackback from your own site.