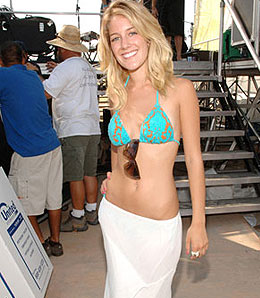 Much like Heidi Montag, Next Gen is sporting a new look.

Next Generation is back, like Heidi Montag on The Hills, but only one of us has a fresh new set of duck lips.

Much like the unrecognizable Montag on last night’s season premiere, I decided to do something a little different this week. Due to an overwhelming positive response to last week’s “Did You Notice” section (thanks, Mom), I submit to my loyal readers a full article of the good stuff.

Among all teenagers to log at least 15 MPG in their rookie season, Thaddeus Young is on pace to finish with the second best field goal percentage. His 53.3 FG percentage ranks only behind the gargantuan 57.1 per cent posted by Moses Malone in the 1974-75 season.

After sinking 10 three-pointers in 19 attempts over his previous two games going into Monday’s action (in which he drained zero from long distance – which truly makes him maddening), Juan Carlos Navarro now resides in seventh place among all rookie seasons. With 12 games remaining, La Bomba finds himself a mere 21 bombs behind Kerry Kittles’ rookie mark of 158 set in the 1996-97 season.

In the 12 games Kevin Durant has played in the month of March, the Seattle stud has a 53.2 FG percentage to raise his season’s to 42.1, slightly better than LeBron James’ rookie field goal percentage of 41.7. Currently standing at 19.6 PPG, Durant has 13 games remaining to improve that average to the magical mark of 20 PPG.

While many dismissed the rumors that Yi Jianlian was supposedly promised as many as 25 minutes per game in his rookie season by Milwaukee Bucks owner Herb Kohl, “The Next Yao Ming” is currently averaging 25.3 MPG.

As much as I’ve ridiculed Al Horford all season, he actually turned in a very solid week. Over his last four games, he averaged 13 points, 12.5 rebounds, four assists and one block, along with his 60 FG percentage and perfect work from the line. Horford also collected his 20th double-double of the season against Dwight Howard last Saturday. Howard, in case you were wondering, had 32 double-doubles in his rookie season, and that was straight out of high school, of course.

Al Thornton is averaging only 9.2 PPG over his last five, and is shooting just 38.9 per cent from the floor in the month of March.

Since the 1980-81 season, only 30 rookies have averaged at least one block and one steal. Jamario Moon currently resides within this impressive group, averaging 1.4 BPG and 1.0 SPG. Although their games don’t appear on the surface to have any similarities whatsoever, look at the resemblance between Moon’s rookie season and that of Vlade Divac:

Moon has some work to do, however, to match Divac’s incredible trifecta. In the span of just six years, Divac appeared in such cinema magic as Juwanna Mann, Space Jam and Eddie.

By Steve Simon
This entry was posted on Tuesday, March 25th, 2008 at 1:16 pm and is filed under BASKETBALL, Next Generation, Steve Simon. You can follow any responses to this entry through the RSS 2.0 feed. You can skip to the end and leave a response. Pinging is currently not allowed.