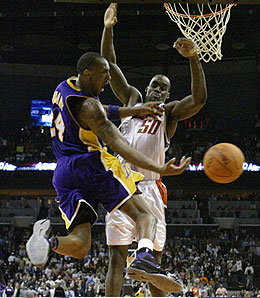 Emeka Okafor, seen here trying to stop Kobe, is one of just 15 rooks to average a double-double. Can Al Horford become the 16th? (AP photo)

On this, the day of April fools, Next Generation monitors an NBA rookie class that is anything but foolish. In fact, it’s been a while since I can recall handing out this much praise to so many first-year players. This week, we look back on some career-high performances, some rookies staring to hit their strides, and some all-time records that may be in jeopardy.

Kevin Durant simply walked right around the rookie wall, and didn’t even break a sweat. In his last five games, KD has managed a 54.5 FG percentage, while averaging 24.2 points and 5.2 rebounds. The Seattle stud seems like a lock to join Carmelo Anthony and LeBron James as the only teenagers to average 20 points or more in their rookie season.

Al Horford is very, very close to averaging a double-double for the season. Currently sporting 10.0 PPG and 9.6 RPG, Big Al could join a select few to do so in their rookie campaign. Since the 1980-1981 season, only 15 freshmen have been able to manage such a feat. Most recently, both Dwight Howard and Emeka Okafor joined the club in the 2004-2005 season.

Jordan, Jonathan, Joey, Donny and Danny, a.k.a. The New Kids on the Block, are reuniting and will appear on The Today Show on April 4. Back in the beginning of the season, I thought for a long time about how I should name this column. Before settling on Next Generation, I came very close to naming it “New Kids on the Block” – after all, NBA rookies are the new guys. I think I probably made the right choice….

Luis Scola can play. How’s this for a week – 15.6 PPG, 8.8 RPG, 1.4 SPG, 53.4 FG%, and 80.0 FT%. The highlight was an 18-point, 18-rebound effort last Wednesday against Minnesota. I guess the Spurs regret the trade they made last July when they sent the rights for Scola along with centre/forward Jackie Butler to the Houston Rockets in return for Vassilis Spanoulis, a future second-round pick, and cash considerations. Spanoulis is doing just fine – in Greece. He was recently named cover player of NBA Live 08, the International version. I kid you not.

Joakim Noah is coming off a stellar five-game stretch in which he averaged 12.6 points, 8.8 rebounds, 2.4 blocks and 1.2 steals, along with a 56.1 FG percentage and 89.5 FT percentage. Most recently, his 18-point, 15-rebound and four-block performance might have been the “Noble One’s” way of crashing the party.

Jamario Moon was re-inserted into the starting lineup of the Raptors, and rewarded patient fantasy owners with a line of 15 points, eight rebounds, two blocks and one steal.

After draining five three-pointers in his last five games, Juan Carlos Navarro now has a total of 142 treys. With eight games remaining, JCN needs 17 to surpass Kerry Kittles‘ record of 158 set in the 1996-1997 season. Navarro has averaged 1.9 from long distance and projects to fall short by one, which is typical of anything pertaining to Memphis Grizzlies basketball.

Daequan Cook is averaging 18.5 points, six rebounds and 4.5 threes in his last two games. Yes, it’s a small sample zize, but he could be a strong play down the stretch, particularly on a roster filled with such household names as Blake Ahearn, Stephane Lasme and Joel Anthony.

After setting a career high with 39 points and adding five steals on Saturday, At Thornton followed with a 26-point, seven-rebound outburst on Monday. Thornton flourishes with Tim Thomas on the sidelines, but how his performance fares with the expected return of Elton Brand bears watching.

Nick Young set a career high with 27 points on Sunday, and came back with an 18-point, three-steal performance last night. Young averaged 29 minutes in those last two games in which Antonio Daniels has been on the shelf with a wrist injury.

By Steve Simon
This entry was posted on Tuesday, April 1st, 2008 at 2:22 pm and is filed under BASKETBALL, Next Generation, Steve Simon. You can follow any responses to this entry through the RSS 2.0 feed. You can skip to the end and leave a response. Pinging is currently not allowed.