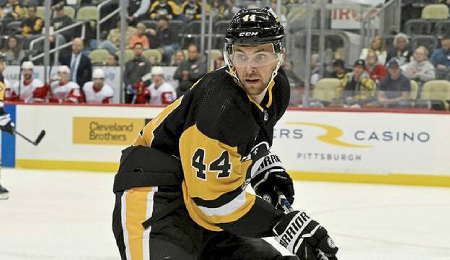 Welcome back to another week of Fantasy hockey. We’re just about at the end of the 22 part of the 2022-23 season, so be sure to take advantage of the waiver wire while your leaguemates are tripping out to ring in the new year.

This week, Aleksander Barkov made Panther history by scoring three times just over 15 minutes into Thursday’s game; the American junior team got a much-needed win over Switzerland at the WJC thanks to two goals from Blues prospect Jimmy Snuggerud; and Sidney Crosby‘s stardom has transcended the sport as he’s been named to the Order of Canada.

Jordan Staal, C, Carolina Hurricanes (ESPN: 9 per cent; CBS: 7 per cent): Before Friday, Staal was riding a five-game point streak (3-5-8), shaking off what had been a slow start to the season and proving he’s once again a very viable Fantasy option. In fact, his nine points in nine games heading into Friday’s action ranked him atop the Hurricane leaderboard over this stretch — not too bad for a recently turned 34-year-old. Staal has seen more PT as the season has progressed and he’s rewarded the ‘Canes’ faith with production. While the veteran is playing well, he needs to be owned. Staal is never going to score a ton of goals, but remains a useful Fantasy option for now.

Jan Rutta, D, Pittsburgh Penguins (ESPN: 0.5 per cent; CBS: 3 per cent): It’s been nearly five years since we last pimped Rutta, but he’s been seeing big minutes lately with Kris Letang out again. No, Rutta won’t generate many points for your Fantasy team, but he’s a capable passer who provides as many Fantasy points as more highly regarded blueliners, such as Connor Murphy. Better yet, Rutta is consistently a positive plus/minus player, averages well over one hit and one block and has dramatically improved his takeaway-giveaway ratio this season. There’s value here in deeper formats. Don’t underestimate what Rutta is capable of, at least in the virtual world when you’re clearly high (see video below).

Robby Fabbri, C, Detroit Red Wings (ESPN: 0.2 per cent; CBS: 3 per cent): We last recommended Fabbri just over three years ago and he rewarded our faith with his best month of the season, remaining strong for several weeks before fading in February. A knee injury suffered last season has kept him sidelined so far in 2022-23, but he’s expected to finally return to action on Wednesday. Before getting hurt last season, Fabbri was enjoying a career effort, earning a three-year extension for his efforts. He managed 30 points in 56 games and would have easily topped 20 goals for the first time had he not gotten hurt. Yes, Fabbri is injury-prone, but has the ability to produce when healthy, so consider him a nice second-half sleeper.

Pheonix Copley, G, Los Angeles Kings (ESPN: 7.9 per cent; CBS: 30 per cent): We gave Copley some love a few years again when he was in Washington, but it didn’t work out so well as he took a beating over the next couple of months and has barely seen the NHL since. But with the Kings’ goalie situation being a shitshow this season, he’s back and looking better than ever (currently sporting his best save percentage ever at .905 through nine games with a GSAx of 0.35). Want proof? Since Copley took over as the main man in early December, the Kings’ GAA has improved from 26th to 13th. Given that transformation, you better believe he’s going to keep getting plenty of burn.

Four series of comedy troupe Monty Python‘s show Monty Python’s Flying Circus ran from 1969 to 1974. In 1974, they released the album Live at Drury Lane, which featured many sketches from the show, including “Idiot Song,” written by Neil Innes, a frequent collaborator with the troupe.

By RotoRob
This entry was posted on Saturday, December 31st, 2022 at 1:14 pm and is filed under HOCKEY, RotoRob, The Wire Troll. You can follow any responses to this entry through the RSS 2.0 feed. Both comments and pings are currently closed.