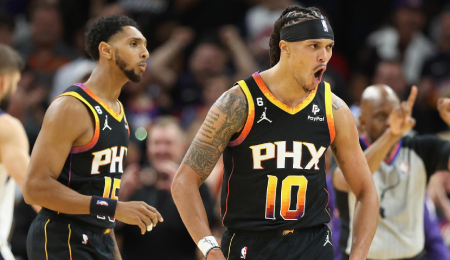 Damion Lee (10) has played well off the Phoenix bench. (ESPN.com)

Welcome back to another week of Fantasy basketball. Christmas has arrived, meaning the season is about 40 per cent done. It’s time to scour the waiver wire to see what SantaRob brought you.

This week, the red-hot Knicks ran into an even hotter Spicy P (aka, Pascal Siakam); first time Hall of Fame candidates in 2023 include Gregg Popovich, the league’s winningest coach; and Zion Williamson has finally been slowed down… by COVID.

Damion Lee, SG/SF, Phoenix Suns (ESPN: 0.8 per cent; CBS: 4 per cent): Two and a half years ago — when he was still in Golden State — we recommended Lee and it was a decent pick before COVID wiped out the rest of the regular season. Now in Phoenix, he’s periodically put up some decent games and although he came off the bench on Friday (pouring in 10 points), he had been starting with Devin Booker (groin) out. Lee’s PT has been inconsistent, which makes it tough to take a chance on him in regular sized leagues, but in a deeper format he brings some scoring and can even drop a sweet dime from time to time. While the 30-year-old vet’s touches are down a smidge this season, he’s been more efficient, and he’s always had the strength to play in the NBA. Mostly, it’s been a lack of quickness that has capped Lee’s ceiling, but there’s no denying his catch and shoot skills (see video below).

Austin Rivers, SG/SF, Minnesota Timberwolves (ESPN: 1.2 per cent; CBS: 3 per cent): It was almost two years ago when Rivers looked like a decent Fantasy option playing for the Knicks. The pick offered mixed results as he was solid that month, barely played in February and missed March entirely, but really picked it up over the final two months of the season. Now in Minny, Rivers had been lighting it up all week until a very quiet game on Friday, although he’s still getting way more touches this month. The former Blue Devil has really shaken off a slow start to the season, perhaps caused by a hip woe suffered in late October.

Jeremy Sochan, PF, San Antonio Spurs (ESPN: 1.8 per cent; CBS: 24 per cent): A relative unknown in Fantasy circles, Sochan is definitely a player you better acquaint yourself with fast as he’s going to fly off the wire this week. He just missed his first double-double of the season on Friday, scoring 12 or more points with seven or more boards for the third straight. Sochan’s touches are rising as the season progresses as the rookie has spent most of the time in the starting five. Sure, his FT shooting form has been a source of ridicule, yet he’s somehow 8-for-11 from the line over the last two games, and if that area of his game improves, look out.

Quentin Grimes, SG, New York Knicks (ESPN: 6.2 per cent; CBS: 46 per cent): Grimes was able to play on Friday, but didn’t exactly light it up despite playing big minutes. He doesn’t offer much in the way of rebounding and he got burned by DeMar DeRozan for the game-winning bucket on Friday, but Grimes has been a real boon in points and three pointers with a decent sprinkling of blocks and steals lately. Grimes’ bucket count has risen significantly this month and his PT is way up this season. Could he be a second-half breakout player?

Daniel Gafford, PF/C, Washington Wizards (ESPN: 5.6 per cent; CBS: 13 per cent): The very community-minded Gafford continued to start and see decent minutes even with Kristaps Porzingis (illness) returning to action on Friday. Gafford has struggled to maintain his intensity through games but has enjoyed some solid scoring totals in limited action (just twice has he exceeded 25 minutes this month). However, his touches are way up this month leading to better offensive showings and we like the fact he’s doing his best work ever at the line this season. There’s upside here.

Aaron Nesmith, SF, Indiana Pacers (ESPN: 2.3 per cent; CBS: 18 per cent): Nesmith missed Friday’s game with an ankle injury, but he’s only considered day-to-day and given how hot he’s been (at least 14 points in three straight games with one double-double), he’s worth grabbing. The former Celtic’s three-point shooting has gotten better and better as the season has progressed, and his overall shooting has bounced back nicely after he struggled in 2021-22. Part of the package Indy got for Malcom Brogdon, Nesmith has morphed into an important rotation piece for the Pacers, with room to grow.

Songwriter James Vernon Taylor, better known as simply James Taylor, turned 74 earlier this year, yet he remains active. In 1970, he released his breakout hit “Fire and Rain,” featuring the B-side “Anywhere Like Heaven.”

By RotoRob
This entry was posted on Saturday, December 24th, 2022 at 12:27 pm and is filed under BASKETBALL, RotoRob, The Wire Troll. You can follow any responses to this entry through the RSS 2.0 feed. Both comments and pings are currently closed.