The Wire Troll: Do the Caps Have Another Great Goalie in Ilya Samsonov? 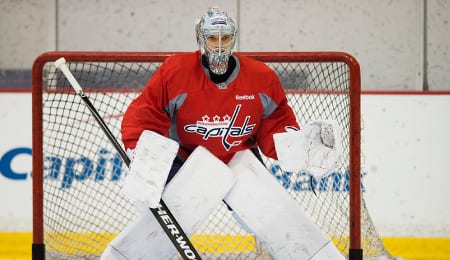 Welcome back to another week of Fantasy hockey. We’re now midway through November and are bearing witness to some simply horrific Movember ‘staches around the NHL. More importantly, the waiver wire beckons. Heed its call.

This week, T.J. Brodie had a health scare following a seizure, but is now recovering at home; Sidney Crosby underwent core muscle surgery on Thursday and will be out for six weeks; and the struggling Kings are benching Ilya Kovalchuk for the foreseeable future.

Ilya Samsonov, G, Washington Capitals (ESPN: 13.7 per cent; CBS: 46 per cent): While starter Braden Holtby has looked much better in his last couple of games, it hasn’t been a banner start to the season for him. That’s opened the door a bit for rookie Samsonov, who has played extremely well. Through a half dozen starts and one relief outing, he has a 2.45 GAA with a .915 save percentage to back a 5-1-1 record. Head coach Todd Reirden clearly has confidence in the young netminder, so he could be a good backup choice as the Caps opt to give Holtby more rest after several seasons of serious workload. Samsonov, who hasn’t really been on the Fantasy radar up to this point, has good size (6’3″, 200) and is very athletic. Given his sporadic workload, sometimes the rust shows (see video below), but in time, he has a chance to be a great starter.

Frederik Gauthier, RW, Toronto Maple Leafs (ESPN: 0.1 per cent; CBS: 1 per cent): When Gauthier was drafted, we actually thought the Leafs got a potential steal. However, the hulking forward has struggled to gain a foothold in Toronto, only breaking through as a full-time NHL player last season. He’s contributing a bit more so far this season, and now that Mitch Marner is out, Gauthier has seen a slight boost in ice time, giving him further opportunity to do some damage. This is a deep league special only, but Gauthier deserves watching over the next few weeks.

Jean-Gabriel Pageau, C, Ottawa Senators (ESPN: 28.9 per cent; CBS: 49 per cent): Continuing his career season, Pageau exploded on Wednesday, scoring on all three of his shots, one of which was the game-winner, while going +4 with two penalty minutes. The pending UFA may simply be adding to his trade value as rumours suggest the Sens won’t be able to re-sign him, so may deal him this season. And with six goals in his last five games, and currently sitting at a 50-goal pace, Pageau is going to fetch plenty.

Robby Fabbri, LW, Detroit Red Wings (ESPN: 5.1 per cent; CBS: 24 per cent): Since being dealt to Detroit, Fabbri has rediscovered his scoring touch, firing two goals and two assists over his first three games before getting shut out by the Kings. His ice time is way up, and after seemingly falling out of favour (and getting hurt a lot) in St. Louis following his promising rookie season, his career has been revitalized. Fabbri is getting shots again, and scoring important goals. Grab him now.

Oskar Lindblom, LW, Philadelphia Flyers (ESPN: 36.1 per cent; CBS: 46 per cent): Lindblom is enjoying a sophomore breakout effort playing on perhaps the best line in the NHL (with Sean Couturier and Travis Konecny). Lindblom has really cut down on the careless penalties and is thriving under new Head Coach Alain Vigneault. Note that Lindblom’s shooting percentage is likely to regress, but this 23-year-old Swede is the real deal.

Nick Bjugstad, C, Pittsburgh Penguins (ESPN: 4.7 per cent; CBS: 4 per cent): Bjugstad dealt with a lower body injury last month, and has been really slow to get going since his return. However, he’s seen an uptick of ice time with Crosby out, so perhaps he’s ready to start producing as the second-line centre.

Mark Borowiecki, D, Ottawa Senators (ESPN: 6.9 per cent; CBS: 20 per cent): Borowiecki has points in back-to-back games, and has already topped his season totals from all of 2018-19. His breakout effort has him ranking among the top blueliners in the game, yet he’s massively underowned. Opportunity knocks here, my peeps; especially in DFS formats.

Anders Nilsson, G, Ottawa Senators (ESPN: 4.4 per cent; CBS: 19 per cent): Nilsson had won three straight starts before running into some trouble against the Canes on Monday. He bounced back nicely with a solid effort on Friday to snap the Flyers’ seven-game point streak. Nilsson has been playing better (.921 save percentage) than his GAA suggests, and is splitting time in the Ottawa net with Craig Anderson, so give him a look.

Here’s yet another tune from Pink Floyd‘s The Wall, an album that sat atop the U.S. charts for 15 weeks. This is “In the Flesh,” which reveals more about Pink‘s infancy.

By RotoRob
Tags: Ilya Samsonov
This entry was posted on Saturday, November 16th, 2019 at 1:45 pm and is filed under HOCKEY, RotoRob, The Wire Troll. You can follow any responses to this entry through the RSS 2.0 feed. Both comments and pings are currently closed.