The Wire Troll: Ondrej Kase on the Rise in Anaheim 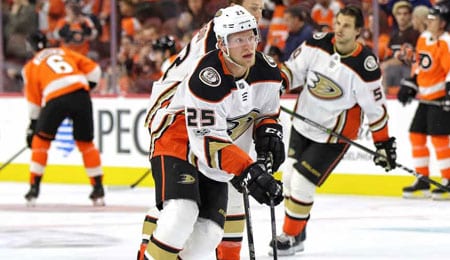 Ondrej Kase is on a sweet roll for the Ducks. (Amy Irvin/The Hockey Writers)

Welcome back to another week of Fantasy hockey. With the trade deadline just two days away, you need to be hyper vigilant about role changes and the opportunity for Fantasy significance that may come with them. Attack the wire with vigour, peeps!

This week, Toronto forward Auston Matthews needed an MRI on his ailing shoulder and is currently listed as day-to-day; Josh Bailey’s All-Star season has been rewarded by the Isles, who signed him to a six-year, $30-million extension; and Germany ended Canada’s bid to win a third straight Olympic gold medal in men’s hockey.

Ondrej Kase, RW, Anaheim Ducks (ESPN: 21 per cent; CBS: 37 per cent): Despite getting shut out in his last two games, sophomore Kase is rising to the occasion lately with five goals and four assists over the last nine games, play that likely has Anaheim considering bumping him up to the top six. His five goals this month already represents a season high, and his shooting accuracy has gone through the roof compared to his rookie effort. Kase is scoring 1.66 even strength goals per 60 minutes — second only to Toronto’s Matthews in the entire NHL. We’re talking about a very underrated player in Kase, one that is generating tons of shots. This Czech has some very impressive offensive skills (including the ability to score from crazy angles — see video below), especially with the puck on his stick, and his upside makes him a tantalizing selection down the stretch given the prospect he gets promoted to a better line.

Tobias Rieder, C, Los Angeles Kings (ESPN: 1.2 per cent; CBS: 4 per cent): Rieder was heating up (2-3-5 in his last four games), before the Coyotes peddled him to the Kings. In his first game with L.A., he was shut out and didn’t see as much ice time, but don’t fret. There’s reason to believe this trade could boost his value even before he was compiling his finest month of the season. If Rieder can get his shot off as often as he did in his first three seasons, his scoring will really begin to rise. He played on the Kings’ third line in his debut, but on practice Friday, he was slotted on the top line with Anze Kopitar and Dustin Brown — a huge boon to his value if this sticks. Perhaps Rieder’s sluggish start this season was because of ankle surgery in the wake of last year’s IIHF World Championship. If that’s the case and he’s now fully healthy, he could be a major steal for the Kings and a great player to grab for your title run.

Alexandar Georgiev, G, New York Rangers (ESPN: unowned; CBS: 2 per cent): With Henrik Lundqvist struggling and the Rangers throwing in the towel this season, suddenly Georgiev has received back-to-back starts for the team. Georgiev looked excellent on Thursday, and while he wasn’t as sharp Friday, he still piled up 33 saves. The Rangers are falling apart right now, but having a 22-year-old rookie step in and save 38 of 40 shots in his NHL debut has to be a bright spot in an otherwise dreary run. Fantasy owners are going to be hearing more about Georgiev very soon.

Darcy Kuemper, G, Arizona Coyotes (ESPN: 13.8 per cent; CBS: 21 per cent): Another backup goalie that caught our eye this week is Kuemper, who was having a fantastic season in the most Fantasy-irrelevant job in the game — as Jonathan Quick’s backup. Although Kuemper hasn’t been as sharp lately in his limited action, he still hasn’t lost a game this month. In fact, he’s only lost once in 19 games (15 starts) all season, already reaching double-digit wins for the third time. Kuemper is sure to see more PT in Arizona and will get his first start with the Coyotes on Sunday. The man headed the other way in the Rieder deal, we feel the change of scenery will be beneficial for both parties. Former Wild Kuemper has struggled to find a role that will provide him with a No. 1 workload, but given his work this season (2.10 GAA), he definitely deserves more PT.

Jan Rutta, D, Chicago Blackhawks (ESPN: 3.8 per cent; CBS: 20 per cent): In his return to the lineup Friday after missing over two weeks, Rutta wasted little time making an impact, scoring one goal and adding an assist while going +2. His penalty minute total has dipped each month, but he’s enjoying a very fine rookie campaign and a few more games like Friday will take him out of the minus (he’s currently -5). An UFA this summer, Rutta has plenty of incentive to finish strong, so if you need a blueliner, give him a look.

Artem Anisimov, C, Chicago Blackhawks (ESPN: 17.1 per cent; CBS: 47 per cent): When he was with the Blue Jackets, Ansimov tended to get more goals than assists but that’s changed since he joined the Blackhawks. Until this season, that is. With three goals and no assists in his last four games, he’s now at 17-7-24 for the season. The goals are sweet, so grab him.

Antti Raanta, G, Arizona Coyotes (ESPN: 28.9 per cent; CBS: 49 per cent): Another UFA, Raanta could be on the block and would be a solid depth addition depending on where he landed.

By RotoRob
Tags: Ondrej Kase
This entry was posted on Saturday, February 24th, 2018 at 7:04 pm and is filed under HOCKEY, RotoRob, The Wire Troll. You can follow any responses to this entry through the RSS 2.0 feed. Both comments and pings are currently closed.