The Wire Troll: Chad Johnson Gets a Chance for Ducks 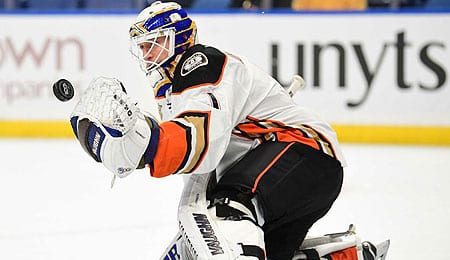 Welcome back to another week of Fantasy hockey. Christmas is in the rear view mirror and you’re sure to have a happier New Year by pilfering the waiver wire first.

This week, Dallas CEO Jim Lites, in describing the play of Jamie Benn and Tyler Seguin, said “they are fucking horseshit.” Hey, don’t hold back on our account, Jim; Winnipeg blueliner Dustin Byfuglien is $2,500 poorer thanks to a slash he applied to Johnny Gaudreau; and the Pens have rewarded centre Jake Guentzel with a five year, $30-million extension.

Chad Johnson, G, Anaheim Ducks (ESPN: unowned; CBS: 9 per cent): Starter John Gibson got hurt on Thursday, forcing Johnson to save 20 of 22 shots in relief. Johnson will see the bulk of the action in the Anaheim net for now with Gibson (upper body) out day-to-day. It’s been a tough season for Johnson, as he got waived by the Blues after some beatdowns, but he’s been really good for the Ducks so far (.911 save percentage) and now has a chance to reestablish himself as a viable NHL goalie. The Saskatoon-bred veteran has played in 185 career games and is just three years removed from being a pretty solid No. 1 goalie in Buffalo. Johnson is no one’s idea of a Fantasy saviour, but if he can deliver some solid performances over the next week or so, he’ll be worth a short-term add, at the very least. If nothing else, he’s looked quite calm in the crease so far for the Ducks (see video below).

Brandon Pirri, C, Vegas Golden Knights (ESPN: 0.6 per cent; CBS: 11 per cent): Pirri has been on a tear since being recalled, potting four goals and an assist in four games while going +4. Not bad for a dude that was traded for a sixth round pick just two years ago. Pirri is vastly underowned right now, so jump on this opportunity while you can.

Antti Niemi, G, Montreal Canadiens (ESPN: 0.3 per cent; CBS: 8 per cent): Lo and behold, Carey Price is hurt again, leaving Niemi to man the Habs’ net. Niemi bounced around like mad last season, but played well after landing in Montreal. Last May, he was re-signed to a one-year deal, but hasn’t been nearly as effective this season as Montreal’s backup. Well, Niemi has a chance to redeem himself this week, and he was a bit better in his start on Friday (23 saves on 26 shots). If you need goaltender help, give him a look, but beware of his matchup Saturday evening in Tampa Bay.

Garret Sparks, G, Toronto Maple Leafs (ESPN: 0.6 per cent; CBS: 15 per cent): Sparks looked real sharp on Friday, stopping all but two of 29 shots to move to 6-1-1 on the season with a .910 save percentage. Based on some recent comments from Coach Mike Babcock, Toronto would like to see starter Frederik Andersen see a bit more rest in the second half, leaving Sparks as a more appealing option. Sparks has been better in his second season, and he’s one more good game away from raising his career save percentage to .900.

James Reimer, G, Florida Panthers (ESPN: 0.6 per cent; CBS: 18 per cent): Reimer is enduring a tough season, but he was better in beating Chicago on Sunday and will get the start vs. the Flyers on Saturday, a decent matchup. He’s earned six wins with a 3.45 GAA, and has gone 5-3-2 over his last 10 games.

Brock Nelson, C, New York Islanders (ESPN: 0.6 per cent; CBS: 33 per cent): The Isles’ No. 2 centre (playing with wingers Anders Lee and Jordan Eberle), Nelson had put up points in three straight games before getting shut out in the last two. He’s cooled off this month, but is still on pace for career highs in goals and points, and his 264 faceoff wins rank 20th in the NHL.

Laurent Brossoit, G, Winnipeg Jets (ESPN: 15 per cent; CBS: 18 per cent): Brossoit has flourished in his first season as the Jets’ backup (2.11 GAA, .939 save percentage in 10 games). Last weekend, he stopped 40 shots against Vancouver for his first career shutout and has played a key role as Winnipeg has soared of late.

Ryan Callahan, RW, Tampa Bay Lightning (ESPN: 0.6 per cent; CBS: 1 per cent): This hard-working veteran should see a boost in PT with J.T. Miller out week-to-week.

Lucas Wallmark, C, Carolina Hurricanes (ESPN: unowned; CBS: 1 per cent): This young prospect is starting to look like a more appealing keeper as his ice time keeps rising and he’s tied for 17th in the NHL in faceoff wins.

Pheonix Copley, G, Washington Capitals (ESPN: 4.5 per cent; CBS: 10 per cent): Copley had some rough outings earlier this season, but sure looked brilliant last Saturday, with a 35-save shutout performance. The goalie, born in North Pole, Alaska (seriously) to parents that can’t spell, looks like he now belongs in the NHL.

Ryan Donato, C, Boston Bruins (ESPN: 0.6 per cent; CBS: 24 per cent): Donato hasn’t lit the world on fire this season after his impressive debut in 2017-18, but he had two goals on Sunday and with Brad Marchand out, has a chance to see more PT.

Late American sax player Oliver Sain played a key role in the development of R&B. In 1976, he released Blue Max, which performed well on the R&B charts, and from that album came “Apricot Splash.”

By RotoRob
Tags: Chad Johnson
This entry was posted on Saturday, December 29th, 2018 at 5:23 pm and is filed under HOCKEY, RotoRob, The Wire Troll. You can follow any responses to this entry through the RSS 2.0 feed. Both comments and pings are currently closed.