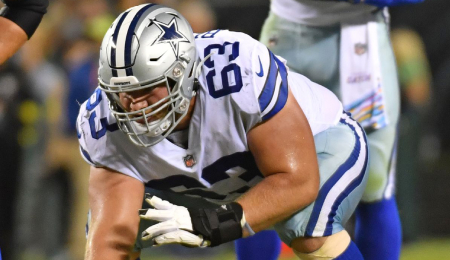 An injury to Tyler Biadasz could have a major impact on the Dallas O-line. (Eric Hartline-USA Today Sports)

Thanks to two straight losses by the Philadelphia Eagles and two straight wins by the Dallas Cowboys, Philly’s once seemingly insurmountable NFC division lead is down to a single game.

If the Cowboys (currently 4.5 point favourites as per odds by FanDuel) can beat Washington while the Eagles (favoured by 13.5) are upset by the Giants, then Dallas will be division champions (based on the division record tiebreaker). In fact, if this happens, the Cowboys could enter the playoffs as the conference’s top seed, depending on how things go with Minnesota and San Francisco.

The ‘Boys are trying to become the first repeat NFC East champions since 2003-04.

While Dallas managed to get by an undermanned Titans’ squad on Thursday, 27-13, it wasn’t the prettiest of wins. Somehow, the Cowboys allowed Tennessee to remain in the game for quite some time despite the Titans giving QB Joshua Dobbs his first start of the season.

Heading into this season, we were all in on quarterback Dak Prescott as a dynasty league option to target. In fairness, a broken thumb cost him several weeks, but he really hasn’t been as effective as last season.

To give you some perspective of how bad this issue has become, consider that Prescott tossed multiple interceptions in a game four times between 2019-2021, yet it’s happened five times over the last eight games. WTF?

Still, Prescott has generally been solid since October, helping turn his season around, so consider him a decent QB1 option for Week 18.

However, one thing that could very much affect his performance is an offensive line that was forced to switch it up dramatically when centre Tyler Biadasz suffered a high ankle sprain at the end of the third quarter on Thursday. Former Wisconsin standout Biadasz (see video below) — who is enjoying the finest season of his career — could return for the playoffs, and if he does, it will be a huge boost to he team’s chances to making a deep run. But for now, the offensive line play will be something to keep an eye on against Washington.

Both of Prescott’s touchdown passes last week were caught by TE Dalton Schultz. The last time we discussed Schultz, we suggested you sit him. So of course, he averaged his most yards per catch all season that week. Uh, yeah…

Moving on, Schultz matched his season highs in targets, receptions and TDs on Thursday, a much-needed effort after a couple of quieter games. He enjoyed his best month of the season in December, hauling in 20 passes for 234 yards, but he’s been unable to come close to matching his 2021 breakout (missing two games didn’t help).

Schultz could walk as a free agent this winter, with rumours suggesting the Cowboys could try to replace him by signing Austin Hooper, also a pending free agent. As for Week 18, consider Schultz a strong TE2, so hardly a must-start depending on your other tight end.

Meanwhile, RB Ezekiel Elliott has had a frustrating season. He’s enduring his lowest YPC ever and has seen his receiving numbers plummet. Yet he’s piled up 12 touchdowns — including at least one in nine straight games — despite missing two games this season. Consider Zeke a strong RB3 for the season finale.

Willie Hutch, the 1970s and ’80s Motown recording star, will forever be known for his work on the soundtrack to the blaxploitation classic Foxy Brown. Here’s the album’s second single, “Foxy Lady.”

By RotoRob
This entry was posted on Tuesday, January 3rd, 2023 at 9:41 am and is filed under FOOTBALL, RotoRob, Team report. You can follow any responses to this entry through the RSS 2.0 feed. Both comments and pings are currently closed.