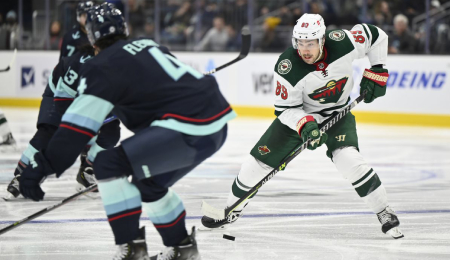 Welcome back to another week of Fantasy hockey. With Christmas just around the corner, we’re nearly two-fifths done the season. It’s time to step up your game with the waiver wire.

This week, Mitch Marner‘s Leaf-record point streak ended; Kris Letang returned from a second stroke and showed no rust; and the Kings locked up Trevor Moore for the next five seasons.

Frederick Gaudreau, C, Minnesota Wild (ESPN: 1.8 per cent; CBS: 3 per cent): Despite getting shut out on Friday, Gaudreau has three goals in the last three games (including a pair on Wednesday) as Minnesota is starting to roll with four straight wins. Included among his markers was his first PPG of the season as the late bloomer finally seems to be translating his AHL success to the NHL with 44 points in 76 games last season and seven goals in 30 games this season. Give Gaudreau a look in deeper formats while he’s hot (especially if he can pull off his moves in the real world as well as the virtual world — see video below).

Craig Anderson, G, Buffalo Sabres (ESPN: 8.7 per cent; CBS: 32 per cent): The last time we checked in on Anderson, he was sharing the net in Ottawa. Over three years later, the now 41-year-old netminder is in Buffalo, yet is still seeing quite a bit of time between the pipes. And why not? Anderson shut out the Kings on Tuesday (his first goose egg since 2018-19) and now has a sub-2.00 GAA in two of the first three months of the season. Want further proof that he’s enjoying a renaissance? Only six goalies that have played 10 games or more so far have better save percentages than Anderson’s .921 mark. He’s actually forcing his way into a bigger role, but the Sabres are being careful about his workload, so don’t expect him to play much more than he currently is.

Charlie Lindgren, G, Washington Capitals (ESPN: 10.1 per cent; CBS: 31 per cent): It’s been even longer since we last pimped Lindgren and he wound up playing just 12 games over the next four seasons combined. However, thanks to injuries he’s getting his shot in the Washington net now, and has managed a decent .910 save percentage, winning five straight before suffering a tough-luck loss on Thursday. If you need short-term goaltending help, you can do worse than Lindgren.

Blake Lizotte, C, Los Angeles Kings (ESPN: 0.1 per cent; CBS: unowned): Lizotte won’t supply a ton of offense, but he has shown improvement over the last couple of seasons, and has proven himself durable, tied for the league lead in games played. He’s slipped in traditionally plus-minus this season, but has put up a career-best 12.5 per cent shooting accuracy and an improved xG percentage of 52.85. Give Lizotte a look in very deep formats.

Mikael Backlund, C, Calgary Flames (ESPN: 7.6 per cent; CBS: 16 per cent): Other than a concussion a few years back, Backlund has generally been quite durable and fairly dependable as a decent source of secondary scoring. But recently he’s really picked it up, racking up eight points over seven games before taking a goose egg on Friday. Hell, to underscore our point, Backlund even saw some time on the top line earlier this week when Elias Lindholm was out.

Nikita Zadorov, D, Calgary Flames (ESPN: 4.3 per cent; CBS: 24 per cent): Zadorov caught our eye two and a half years ago when he was putting up some nice offensive numbers in Colorado. The following season he disappointing in Chicago, but has been much better since coming to Calgary in 2021-22. Zadorov has enjoyed a nice boost in PT with Chris Tanev currently out and, while the scoring has been lacking of late, he’s getting shots (six in the last two games) and also blocked a pair on Friday. Zadorov is getting more ice time than ever this season and he’s always been a help to those in PIM leagues.

Matt Benning, D, San Jose Sharks (ESPN: 5.5 per cent; CBS: 9 per cent): Benning showed promise early in his career, but has seen his role diminish in recent seasons. However, in his first season in San Jose he’s enjoying a career effort, seeing more action than ever and really racking up the apples, including nine in a 10-game stretch before Tuesday.

Lawson Crouse, LW, Arizona Coyotes (ESPN: 10 per cent; CBS: 19 per cent): Very quietly, Crouse is having a breakout season. He fired home seven goals in November and already has three on just 15 shots this month while continuing to see an uptick in minutes. Coming off his first 20-goal campaign in 2021-22, he’s on pace to top 35 this season, so why is his ownership so low? We would have thought that Crouse’s game eight days ago against Boston (two goals, including the game winner, and an assist) would have sent owners to the wire to grab him, yet he remains widely available. Go get him now!

Canadian musician Tom Cochrane earned his fame as the leader of the underrated Red Rider, but also enjoyed a fine solo career that remains active to this day. In 1995, he released his third album, Ragged Ass Road, which included the track “Paper Tigers.”

By RotoRob
This entry was posted on Saturday, December 17th, 2022 at 1:57 pm and is filed under HOCKEY, RotoRob, The Wire Troll. You can follow any responses to this entry through the RSS 2.0 feed. Both comments and pings are currently closed.