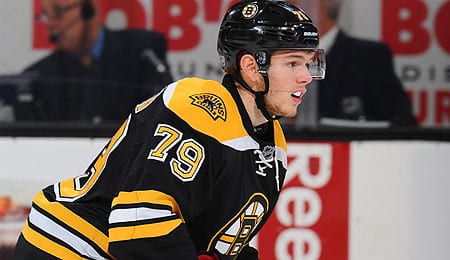 Rookie Jeremy Lauzon’s ice time is on the rise. (NHL.com)

Welcome back to another week of Fantasy hockey. We’re now just four days away from the 2018 U.S. Hockey Hall of Fame induction ceremony, which will see Red Berenson, among others, enshrined.

This week, Seattle has been awarded a new NHL team, and arena construction is already underway; Ottawa landed minor league defenseman Stefan Elliott, a veteran of 84 NHL games over the course of five seasons, in a four-player deal with Pittsburgh; and Forbes‘ latest list of the most valuable NHL teams lists the Rangers at the top, valued at US$1.55 billion.

Jeremy Lauzon, D, Boston Bruins (ESPN: unowned; CBS: unowned): Boston has yet another budding young blueliner on its hands in Lauzon, who logged a team-high 29 shifts on Tuesday. The rookie hasn’t done much offensively through 15 games (just one goal — see video below — and 10 shots), but is starting to see more PT, topping 18 minutes in two of the last three outings. Lauzon was brought up from Providence with Zdeno Chara out long-term, and the kid is holding his own. With an HDCF percentage of 55.56, Lauzon has been performing very well, and the points should start coming as his ice time increases. The youngster has proved mobile, and with four points in eight games in the AHL before his recall, was beginning to flash the offensive potential he showed in junior (in 2015-16, he put up 50 points in 46 games in the QMJHL).

Michael Matheson, D, Florida Panthers (ESPN: 7.8 per cent; CBS: 24 per cent): We recommended Matheson in late-March based on his big minutes, and it worked out well as he enjoyed a season-best +3 rating that month. This season, he’s logging even more ice time (21:54 per game, 23:33 on Thursday), but is also coming into his own offensively. Matheson is riding a four-game point streak with a goal and three helpers, and is on pace to more than double his career high in assists.

Curtis McElhinney, G, Carolina Hurricanes (ESPN: 14.1 per cent; CBS: 47 per cent): Yes, McElhinney is now hurt, so this is not a pickup if you need immediate help. But assuming it’s not a long-term concern, he’s definitely worth a look as he’s seen the bulk of the starts for the Hurricanes and has performed extremely well. Before taking a shellacking on Wednesday, McElhinney had a run of five straight games giving up two or fewer goals, and it’s clear he’s going to fly past the 15 starts he made for the Leafs last season, especially now that Scott Darling has been sent down to the minors.

Cal Petersen, G, Los Angeles Kings (ESPN: 2.2 per cent; CBS: 14 per cent): On the flipside, if you’re seeking a short-term and immediate fix in net, have a look at Petersen. Jack Campbell is out and Jonathan Quick is getting shelled, leaving the rookie Petersen to get a decent look in the Kings’ net. Over his last three games, Petersen has surrendered just five goals while recording a save percentage of over .950. Consider another thing: if L.A. continues to flounder, Quick could be dealt, leaving Petersen with an important role.

Chris Tierney, C, Ottawa Senators (ESPN: 0.2 per cent; CBS: 24 per cent): Matt Duchene (LBI) could be out for a while, allowing Tierney to see top six minutes and a nice boost in PT. Tierney is already enjoying a breakout campaign with 20 points in 29 games, and the extra minutes could take him over the top and make him a nice asset for the remainder of the season. You’ve got to figure the goals will come as his shooting percentage (6.5 per cent) normalizes.

Daniel Sprong, RW, Anaheim Ducks (ESPN: 0.5 per cent; CBS: 24 per cent): Sprong definitely needed out of Pittsburgh, where he struggled mightily this season, so the trade to Anaheim — if for no other reason than a change of scenery — was good. And sure enough, after languishing near the bottom of the Penguin roster, he immediately was given a top six role on the Ducks, scoring a goal in his debut. Sprong got even more ice time in his second game, and now — with news that Rickard Rackell is out with an ankle injury — he’s getting moved up to the No. 1 line. Spear Sprong now!

Derek Ryan, C, Calgary Flames (ESPN: unowned; CBS: 1 per cent): Ryan could be an interesting short-term pickup or fine DFS play while Mikael Backlund (concussion) is out. Ryan is coming off a career season in Carolina, and hasn’t been as effective for the Flames, but he’s got a chance to do something now and finally provide some Fantasy value.

Nick Jensen, D, Detroit Red Wings (ESPN: unowned; CBS: 1 per cent): Jensen hasn’t done much offensively lately (although he just missed a goal on Thursday when he ripped one of both posts), but he’s been solid, going +3 over the last five games, while seeing tons of ice time (over 22 minutes in four of the last five, including a season-high 25:08 on Thursday). He’s on pace to set new career highs in goals and points and is contributing in blocks, too, with 45 so far. Detroit is high on Jensen, so he’s going to get his minutes.

It’s time for another track from Pink Floyd‘s The Wall. We tried to find a video of this track from the movie, but we’ll have to settle for a live performance of “What Shall We Do Now?”

By RotoRob
Tags: Jeremy Lauzon
This entry was posted on Saturday, December 8th, 2018 at 1:04 pm and is filed under HOCKEY, RotoRob, The Wire Troll. You can follow any responses to this entry through the RSS 2.0 feed. Both comments and pings are currently closed.