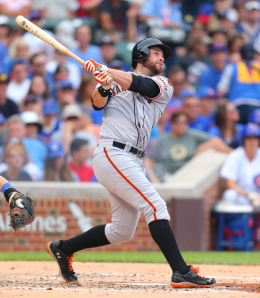 In late-April, we noted how San Francisco Giants first baseman Brandon Belt was already cooling off after a nice start (although literally the day after we published that article, he did manage to get his three-bagger).

Unfortunately, his struggled continued most of the season, aided in large part by constant knee woes which ultimately led to season-ending surgery in early September.

After that solid start, May was ugly (.200 BA), followed by even worse hitting in June. Belt was better in July, managing to put up some decent counting cat numbers, but he struggled to get on base August and it was clear he was done for the season.

All told, in about a half-season’s worth of at-bats, his counting numbers were awful, his once modest speed mostly disappeared (obviously the knee helped that, along with age), and he never had a worse slugging percentage. Perfect timing with him facing free agency amid big question marks about how much he has left thanks to multiple operations on the same knee.

Is there a big market for a first baseman who will turn 35 in late-April, is coming off the worst power season of his career… oh, and has a chronic knee issue? Remember that once upon a time, Belt could really mash — in both the real and virtual worlds (see video below).

This much we know: given that he says he will not accept a minor league deal, he’s almost assuredly done in San Francisco, so will likely fall a single home run shy of tying Will Clark for ninth place in franchise history. Belt has spent his entire 12-year career with the team.

We also know that he’s bullish about his chances to play on (what else would he say?), but it’s not inconceivable that if the right situation doesn’t present itself, he could decide to pack it in.

With Evan Longoria probably gone as well, the Giants’ infield will definitely have a different feel in 2023.

As for Belt, he’s been an above average hitter (123 OPS+) for a long time, one that’s proven he can get on base at a very good clip (.356). That could draw interest if he has a clean bill of health. The Mets, for instance, could use an injection of power. So could San Francisco after swinging and missing on Aaron Judge, but a reunion with Belt seems like a stretch even if there seems to be mutual interest. Stranger things have happened.

More possible, Tampa Bay could be a landing spot for him as the Rays really need to add an established lefty bat.

Realistically, wherever he signs, Belt would likely be part of a DH platoon, with periodic action at first base. We imagine given his knee woes, his days of manning the outfield are done.

From a Fantasy perspective, for 2023 Belt is barely a top 50 option at first base and is not even being drafted among the top 500 players right now.

But if you feel like taking a shot on a dude that’s only two years removed from hitting a career-best 29 homers (in just 97 games, to boot), he’s your man. Just be sure that: (a) Belt has a job; (b) his knee seems sound; and (c) you’re in a very deep league.

American songwriter and living legend Bob Dylan was born Robert Allen Zimmerman. Nashville Skyline (1969) continued his experimentation with rustic styles, and the first single from this effort was “I Threw It All Away,” which reached No. 85 on the Billboard Hot 100.

By RotoRob
This entry was posted on Tuesday, December 13th, 2022 at 5:35 pm and is filed under BASEBALL, Player profile, RotoRob. You can follow any responses to this entry through the RSS 2.0 feed. Both comments and pings are currently closed.