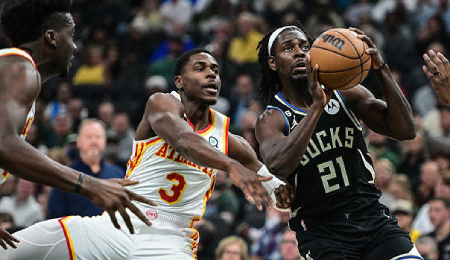 Welcome back to another week of Fantasy basketball. With December nearly halfway done, we’re about a third of the way through the season. Employ the wire!

This week, Dejounte Murray suffered an ankle injury that will cost him around two weeks (see below for the Fantasy opportunity this presents); Rudy Gobert played in Utah as a visitor for the first time ever and really enjoyed himself with a big double-double in a win; and so much for Obi Toppin (leg) staying healthy — he’ll miss two or three weeks.

Aaron Holiday, PG, Atlanta Hawks (ESPN: 0.2 per cent; CBS: 1 per cent): With Murray out another two weeks (plus John Collins and D’Andre Hunter also hurting), Atlanta is really shorthanded right now. This has allowed Holiday to move into the starting lineup, and while he only played 19 minutes on Friday, he did manage three steals and a couple of boards. Yes, he’s shown he can put up some decent points in limited minutes (see video below), but it’s safe to assume he’s going to get more PT for the next couple of weeks (he saw 30 minutes of action on Wednesday), making him a worthy addition in deeper formats. You may recall that at the end of the 2020-21 season, Holiday was the Pacers’ sixth man, earning himself some Fantasy love from us. He justified the pick with big minutes in the season’s final month. Unfortunately, it’s been pretty much downhill for Holiday since, but he’s got a chance to reestablish some value right now, so he bears watching. Sure, he’s generally only about a top 65 point guard usually, but while he’s starting he’s worth considering. Remember that when Holiday came out of UCLA, he was considered small, but was also seen as a good defender with strength and quickness.

American hip hop band The Roots got their start in 1987, and are still at it today. In 1999, they released their fourth album, Things Fall Apart, and the first single was “You Got Me,” featuring vocals by the wonderful Erykah Badu, one of our personal faves.

By RotoRob
This entry was posted on Saturday, December 10th, 2022 at 12:17 pm and is filed under BASKETBALL, RotoRob, The Wire Troll. You can follow any responses to this entry through the RSS 2.0 feed. Both comments and pings are currently closed.