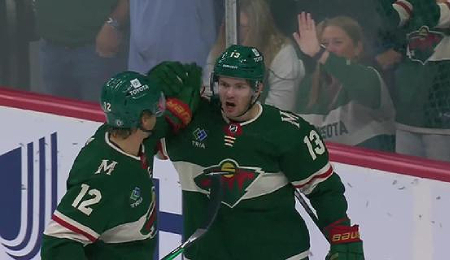 Welcome back to another week of Fantasy hockey. With December here, it’s officially no longer “early in the season.” It’s time to step up your game with the waiver wire.

This week, Steven Stamkos — the top overall pick in 2008 — became the 95th player in NHL history to record 1,000 points; King “goalie of the future” Cal Peterson cleared waivers and was farmed out; and Mitch Marner etched himself into the Maple Leaf record book with points in 18 straight.

Sam Steel, C, Minnesota Wild (ESPN: 0.3 per cent; CBS: 3 per cent): Steel suddenly finds himself acting as the middleman for Kirill Kaprizov and Mats Zuccarello, a very promising place to be from a Fantasy perspective. Steel has rewarded the Wild’s faith, scoring in back-to-back games and earning the third star in Thursday’s win over the Oilers. Clearly stoked to be in Minny, he’s already just one goal shy of matching his career high, and while his elevation to the top line comes as a surprise — and may not last — he makes for an extremely worthwhile addition for now. Still, Steel was a first rounder in 2016 for the Ducks, and while he’s struggled to find his place, perhaps he’s simply a late bloomer who needed a change of scenery. Take a shot here and see how things play out. Hey, if nothing else, when he was with the Ducks, Steel showed the ability to piss people off (see video below).

Nicholas Paul, C, Tampa Bay Lightning (ESPN: 28.7 per cent; CBS: 43 per cent): Paul has quietly been filling the net for the Lightning, on Thursday enjoying his second multi-goal game over the last five (5-2-7, with a pair of power play markers). He averaged nearly a point per game last month, so this hasn’t exactly come out of nowhere, and with a +15 mark, he’s well on his way to topping last season’s career-best effort. Paul will be a popular waiver wire pickup this week, so grab him quick.

Mike Matheson, D, Montreal Canadiens (ESPN: 6.0 per cent; CBS: 30 per cent): Given that he’s bilingual, Matheson has quickly become a media darling in Montreal, but his play is also worth the attention of Fantasy owners. He began the season on the injured list (in the wake of an upper body injury last season), but wasted no time making an impact, scoring a goal with an assist over his first four games while logging heavy minutes. His plus-minus is not ideal, but he’s playing more than ever. Seeking blocks and plenty of TOI? Matheson’s your man.

California rock band Creedence Clearwater Revival got its start in 1959, remaining active until just 1972, yet leaving a treasure trove of classics over that time. In 1976, a greatest hits compilation was released entitled Chronicle: The 20 Greatest Hits. It’s also called Vol. 1 (as 10 years later, a Vol. II was released). From this package comes the band’s amazing cover of Screaming Jay Hawkins‘ “I Put a Spell on You.”

By RotoRob
This entry was posted on Saturday, December 3rd, 2022 at 12:50 pm and is filed under HOCKEY, RotoRob, The Wire Troll. You can follow any responses to this entry through the RSS 2.0 feed. Both comments and pings are currently closed.