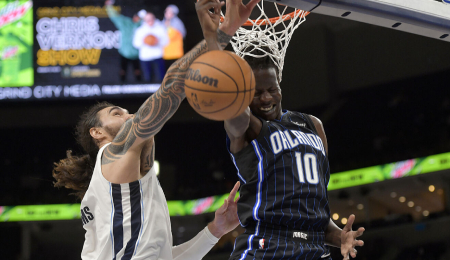 Welcome back to another week of Fantasy basketball. We’ve got an exciting big and a couple of swingmen featured this week, so get ready to run to the waiver wire and take advantage of these opportunities.

This week, Luka Doncic outplayed stars Kevin Durant and Kyrie Irving to help prolong the Nets’ struggles; Damian Lillard‘s early-season scoring tear has hit the pause button thanks to injury (see below for the Fantasy opportunity); and Washington’s D will suffer with Delon Wright (hamstring) out for 6-to-8 weeks.

Bol Bol, C, Orlando Magic (ESPN: 11.4 per cent; CBS: 32 per cent): We’re not completely ready to drop Mo Bamba (especially after a surprisingly good offensive showing on Friday), but Bol got his first start of the season on Friday (enjoying a solid offensive game himself), his PT keeps rising and he’s now consistently flirting with double-doubles while piling up the blocks. Bol has shown a willingness to run the court and he’s getting rewarded (see video below — sorry about the ad… ugh). This 7’2″ behemoth has tremendous rebounding potential, especially as he gains strength. Breakout alert.

Norman Powell, SG/SF, Los Angeles Clippers (ESPN: 21.9 per cent; CBS: 50 per cent): Three seasons ago, Powell was among the top waiver wire pickups (even if we had to repeatedly tout him before owners caught on), establishing himself as a nice source of scoring, a trait which he’s maintained. However, he’s off to a horrid shooting start this season (36.5 per cent from the floor compared to his previous worst, 40.1), so his scoring has suffered. Still, with Kawhi Leonard (knee) already hurting and Powell regaining his touch on Thursday (9-for-15), now is the time to strike. Powell has proven he can fill up the bucket, so don’t sleep on this one.

Shaedon Sharpe, SG, Portland Trail Blazers (ESPN: 3.2 per cent; CBS: 36 per cent): With Lillard (calf) out for 1-to-2 weeks, Sharpe is seeing a boost in PT (getting his first career start on Friday), and he’s responded with three straight games of 11 points or more. Sharpe’s solid play has really helped spur Portland to a fine start, so if he continues to receive 25+ MPG, he’s worth adding.

Dennis Smith Jr., PG, Charlotte Hornets (ESPN: 38.5 per cent; CBS: 42 per cent): About a year and a half ago when he was still in Detroit, we pimped Smith and it yielded mixed results as he had a decent March before his scoring dried up in April. He was even less of a factor last season, but has really stepped up so far in 2022-23, starting now with Terry Rozier out and really producing prior a poor shooting night on Friday (2-for-7). Smith has been seeing his most PT since his first season with the Knicks, so give him a look.

Malik Beasley, SG, Utah Jazz (ESPN: 41 per cent; CBS: 39 per cent): A 2019-20 waiver wire All-Star, Beasley has regressed steadily since. But Utah is expected to trade away several key parts this season, including Jordan Clarkson, which will open up a major opportunity for Beasley. Beasley could find himself starting again by season’s end, so picking him up now could really pay off.

R.J. Hampton, PG, Orlando Magic (ESPN: 0.4 per cent; CBS: 2 per cent): Hampton took a step back last season (getting COVID didn’t help), and had been seeing even less PT so far this season, but he has a chance to offer short-term value in deeper formats with Cole Anthony (oblique) likely out until at least next week. Hampton played 25 minutes on Friday, scoring nine points with four boards, four assists and two steals. The Magic opted to not pick up his fourth year option, so he’s definitely motivated to earn a contract from someone next season.

Jalen McDaniels, SG/SF, Charlotte Hornets (ESPN: 5 per cent; CBS: 10 per cent): McDaniels shot poorly on Friday, but has posted some nice offensive games over the last week. Despite playing exclusively off the bench so far this season, his bucket count is up and he’s averaging a career-best nine rebounds per 40.

Naji Marshall, SF, New Orleans Pelicans (ESPN: 0.1 per cent; CBS: unowned): Seeing extra PT with Brandon Ingram (concussion) out, Marshall is showing what he can do, enjoying his best game of the season on Friday when he went off for 21 points. For the first time, Marshall is going to be a fixture in the Pelican rotation this season, so now’s your chance to buy in low — at the very least in deeper formats.

Reggie Bullock, SG/SF, Dallas Mavericks (ESPN: 1.4 per cent; CBS: 12 per cent): Bullock’s bucket count has dropped over the last couple of seasons, but he’s been getting huge minutes recently, including a team-high 42 in Thursday’s OT win. Even if the production has left something wanting, the opportunity is clearly there, so give him a look in deeper formats.

Bruce Brown, SG, Denver Nuggets (ESPN: 4.8 per cent; CBS: 17 per cent): Brown has been inconsistent so far, but he’s put up some impressive efforts that should grab your attention. He’s a decent playmaker, and he’s shooting better after regressing last season. Brown will be a popular pickup this week, so don’t delay if you want him.

Jaylen Nowell, PG/SG, Minnesota Timberwolves (ESPN: 8 per cent; CBS: 24 per cent): Nowell had a poor shooting night on Friday, but scored at least 13 points in each of the first five games. Looking for a sleeper this season? Nowell seems to be the Wolves’ top backcourt bench option given how many more touches he’s getting this season.

Folk rockers Cowboy Junkies formed in Toronto in 1985 and are still at it today. In 1988, they released their second album, The Trinity Session, and from this comes “200 More Miles,” documenting their touring exploits.

By RotoRob
This entry was posted on Saturday, October 29th, 2022 at 1:33 pm and is filed under BASKETBALL, RotoRob, The Wire Troll. You can follow any responses to this entry through the RSS 2.0 feed. Both comments and pings are currently closed.