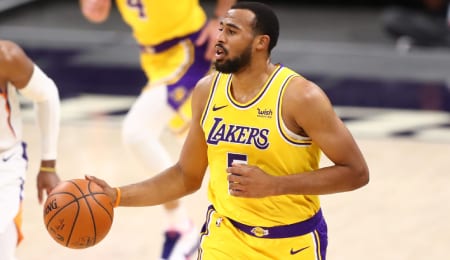 Welcome back to another week of Fantasy basketball. We’re into March now, and pretty much halfway through the season. There is still lots of time for you to make up ground in your league, but keep your finger on the waiver wire button, peeps!

This week, Detroit bought out Blake Griffin, with Brooklyn being mentioned as a possible landing spot; LeBron James took Giannis Antetokounmpo with the first pick in the All-Star Game draft; and Golden State opted to rest both Stephen Curry and Draymond Green heading into the All-Star weekend.

Talen Horton-Tucker, SG/SF, Los Angeles Lakers (ESPN: 4.5 per cent; CBS: 15 per cent): Back in the season debut of this year’s NBA Wire Troll we pegged Horton-Tucker as a breakout candidate. And while he’s getting more PT and touches this season, we haven’t seen him take an immense step forward. However, we still believe that Horton-Tucker’s time may come — especially with the Lakers opting to execute a load management plan with LBJ. Of course, that makes Horton-Tucker a better option in DFS play when you know James will be rested. We really love Horton-Tucker’s defensive capabilities and we’ve seen the flashes on offense, like Tuesday’s 16-point effort in just 19 minutes (see video below), following up the next day with nine points, leaving him one shy of a third straight double-digit scoring effort. What really intrigues us here is his potential second half explosion should he be dealt at the trade deadline. This is a kid that knows how to take advantage of his massive wingspan and is poised to take off if the PT is there.

Robert Williams III, PF/C, Boston Celtics (ESPN: 30.8 per cent; CBS: 48 per cent): Williams has been on fire lately, averaging 10.8 points, eight boards, 2.8 assists and a pair of blocks in 21.8 minutes over the last four games. He was a beast on Tuesday, and then on Thursday he saw a season-high 23 minutes of action. It’s true that he’s tough to rely on as a bench player, but the PT is definitely rising to the point that he needs to be added as a Fantasy basketball waiver wire pickup. Williams’ bucket count is up this season, and he seems to be really thriving now that his role as the backup centre is more defined.

Nico Mannion, PG, Golden State Warriors (ESPN: 0.2 per cent; CBS: 1 per cent): The jury is still out on whether Mannion, 19, has a real future in the NBA, but the fact he got the start on Thursday as the Dubs opted to rest veteran Curry was telling. Mannion gave us a hint of what he’s capable of with nine points, six assists, four boards and a steal in 31 minutes, so give him consideration as a DFS option when Curry is out, or as a very deep league asset. Just don’t be surprised either if Mannion winds up back in the G-League given his tender age.

Dennis Smith Jr., PG, Detroit Pistons (ESPN: 37.4 per cent; CBS: 44 per cent): The former Slam Dunk Contest competitor has enjoyed a decent first half, punctuated by Wednesday’s triple double (the third of his career). Smith has managed double-digit points in five of his last six games, and after being a deep bench afterthought in New York, he’s become the starting PG for the last seven games since arriving in Detroit in the Derrick Rose trade. Smith’s three-point shooting has never looked better since the deal, so it’s time to give him a long look.

Sekou Doumbouya, PF, Detroit Pistons (ESPN: 0.3 per cent; CBS: 6 per cent): With Griffin now done in Detroit, there’s a chance for Doumbouya to grab some extra minutes and enjoy a nice second half. Heading into the break, Doumbouya has picked up his play, narrowly missing scoring in double figures in both. This kid is just 20, so remains a work in progress, but if he can get his shooting touch back to what we saw in his rookie season, he’ll be a nice second-half sleeper. The numbers aren’t there yet for Doumbouya, but he’s trending in the right direction.

Bruce Brown, SG, Brooklyn Nets (ESPN: 34.9 per cent; CBS: 24 per cent): The former Piston is coming off the bench a bit more in his first season with the Nets, and overall his performance has dipped. But lately, Brown has been on fire, scoring at least 13 points in six straight while consistently flirting with double-doubles and even a potential triple dub on Wednesday (17 points, eight boards, seven assists). Toss in his efficient shooting of late and he makes for a very nice pickup.

By RotoRob
This entry was posted on Saturday, March 6th, 2021 at 3:02 pm and is filed under BASKETBALL, RotoRob, The Wire Troll. You can follow any responses to this entry through the RSS 2.0 feed. Both comments and pings are currently closed.