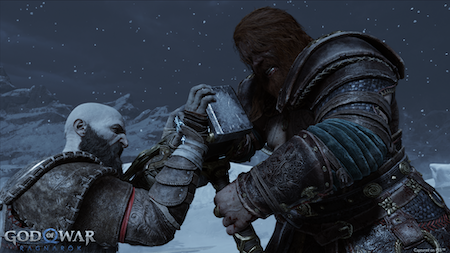 After more than a decade in its original hack-and-slash incarnation, God of War went back to the drawing board in 2018 with developer Sony Santa Monica, shifting the setting to Norse mythology and creating a nuanced, emotional portrayal of Kratos, the titular God of War. In hindsight, it may have been the most effective direction change in gaming history, taking the popular and acclaimed franchise to new heights. Now, Kratos and Atreus are back in God of War Ragnarok, a game that builds on its predecessor in myriad ways.

Obviously, one of the big developments since 2018 was the launch of the PlayStation 5, and while you don’t need one to play Ragnarok, the game looks spectacular on it. The way in-game action seamlessly bleeds into cut scenes is excellent, allowing you to stay fully invested during the many emotionally packed moments. Combat is buttery smooth, and we can’t remember a single instance of technical hiccups even in its pre-launch state.

World design and variety are excellent, making the various realms a joy to explore. Plus, even though you’ll be revisiting areas like Midgard, the change in weather allows for a fresh coat of paint to be applied, dampening any sense of deja vu. The voice acting is top shelf, and it’s quite amazing to think of just how much work has gone into transforming Kratos from hate-filled god into a fully realized personality.

In terms of the story, things pick up three years after the conclusion of the last game with Midgard transformed by the ongoing Fimbulwinter, though in an exceedingly clever bit of symmetry the post-credits scene from the previous game is woven into Ragnarok‘s opening moments. Once the meeting with Odin and Thor has concluded, we move into the meat of the story with Atreus struggling with the gravity of his destiny and desire to prevent Ragnarok.

There are so many story beats across the game’s lengthy campaign that it’d be fruitless to try to provide much of a synopsis. Plus, we don’t want to offer hints as to where the story is headed. Suffice to say it continues to take Kratos down a far more “human” path while also really ramping up Atreus’ role. Yes, this is still Kratos’ story first and foremost, but there’s definitely some Halo 2 vibes here as Atreus grows into manhood and becomes much more than just a sidekick.

Freya and Mimir also factor heavily into the story, with the latter continuing to infuse the game with refreshing humour that helps balance out the deadly serious nature of the main story. It’s yet another area where Sony Santa Monica succeeds, even giving Kratos chances for brevity that are sure to make you crack a smile while never undermining what makes him such a strong protagonist — he does not need a snack!

As with the previous game, Ragnarok features a blend of combat, exploration, and puzzle solving. While the latter two feel very much like an extension of the first game, combat has been ramped up for the sequel. This time, Kratos will have access to his axe and the Chaos Blades from the beginning, creating the option for two distinct fighting styles. Although there are some element-based opponents that will essentially require using one weapon over the other — e.g., icy foes are susceptible to the blade’s flames — you’re typically free to mix and match as you see fit.

Adding to your combat repertoire is an assortment of powerful abilities that you can choose from, each of which can be individually leveled up. Atreus also has a much more in-depth skill tree to unlock, and you’ll eventually be joined by another support character with their own unique abilities to supplement your attacks. It’s a great system that encourages exploration and diversity, and the game takes on a very rhythmic, visceral feel when you become adept at parrying, dodging, and counter attacking. It’s great fun.

Enemy variety is also much improved, necessitating different tactics as you wade through foes of various shapes and sizes, many of which have unique abilities — such as covering you in bifrost, making it so any additional hit you take does added damage. While this definitely helps keep things fresh as you make your way through the world, it’s worth noting that keeping track of some of the specificity of how to handle that variety was an occasional issue for us when revisiting areas after time away.

Boss fights are suitably grandiose with some real standouts along the way. One decision that we’ve been fans of since the Final Fantasy days is that the game’s most difficult fights are optional. Like the valkyries in the last game, the berserkers brought about a higher challenge than the gods you face. Granted, it doesn’t make much sense thematically, but for our enjoyment of the game we steadfastly approve.

All told, God of War Ragnarok took north of 30 hours to complete with many of the realms having opportunities for story-based missions, side quests, and loads of collectibles to promote exploration. The rewards for completing these optional activities are well worth the investment, too, and they serve to further flesh out the mythology.

God of War Ragnarok is a masterpiece, eclipsing the original and providing PlayStation owners with a phenomenal experience to close out 2022. It’ll be on the short list for Game of the Year across the gaming universe, and it absolutely deserves it.