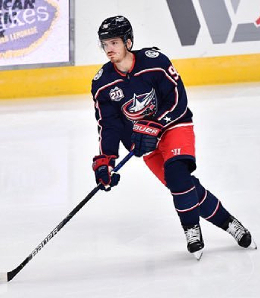 Welcome back to another week of Fantasy hockey. We’re at the stage of the season when impatient owners are dropping players off to slow starts, presenting opportunities for you.

This week, the Panthers inked veteran forward Eric Staal, teaming him with baby bro Marc; the defending champs have lost captain Gabriel Landeskog (knee surgery) for the next 12 weeks (see below for the Fantasy opportunity this presents); and Detroit’s Jakub Vrana was off to a good start, but will be sidelined indefinitely after entering the league’s player assistance program.

Jack Roslovic, C, Columbus Blue Jackets (ESPN: 49.1 per cent; CBS: 29 per cent): Roslovic has slipped on the depth chart in Columbus (hence his slow start offensively), but we can’t forget that he’s just 25 and has gotten better each season. He’s still seeing PP1 time, is getting chances (averaging two shots per game compared to just 1.6 last season) and is finally winning faceoffs, so giving up on him now seems premature. Yes, consistency has been an issue here, but there’s a reason the Jackets gave Roslovic an extension in January; the 25th overall pick from 2015 has the skills and speed to rack up the points (see video below), so grab him if he was dropped and exercise a bit of patience.

Andrew Cogliano, LW/C, Colorado Avalanche (ESPN: 0.4 per cent; CBS: unowned): A 2019 trade to Dallas didn’t help Cogliano regain his scoring touch, and really, he hasn’t been the same since getting dealt from Anaheim. However, he’s moved up to the top nine with Landeskog out and has already proved productive (one goal, one assist in five games). Despite his advanced age, Cogliano makes for an intriguing early-season addition in deeper formats even if he’s been off the Fantasy radar in recent seasons.

Gabriel Vilardi, C/RW, Los Angeles Kings (ESPN: 27 per cent; CBS: 41 per cent): Vilardi created tons of buzz when he first arrived in the NHL two and a half years ago, and showed further promise in 2020-21, but failed to dent the twine much last season in limited action. However, early on this season, he’s looking like a potential breakout star even though he’s capped by his current third line role. Still, having already matched last season’s point total and looking like a top five RW option so far, Vilardi demands your immediate attention.

Tomas Tatar, LW, New Jersey Devils (ESPN: 1.9 per cent; CBS: 6 per cent): It’s been a really long time since we last pimped Tatar, and he remained a consistent scorer, enjoying a career season with the Habs in 2019-20. However, since then this proven veteran has slipped a tad, and now finds himself getting dumped in many leagues having gone scoreless through four games to begin this season. We advise you take advantage of this opportunity, as his ice time isn’t really down that much and he remains a competitor capable of at least flirting with 20 goals. Tatar is getting on in years a tad (31), but his on-ice shooting percentage was uncharacteristically low last season; expecting a bounce back is quite reasonable. Grab him in 14-team leagues or larger and reap the benefits when the puck luck changes and he starts to produce closer to his normal level.

Gothic legend Bauhaus formed in Northampton, England. Here’s another track from the 1989 compilation, Swing the Heartache: The BBC Sessions, the band’s signature song “She’s in Parties.”

By RotoRob
This entry was posted on Saturday, October 22nd, 2022 at 9:47 am and is filed under HOCKEY, RotoRob, The Wire Troll. You can follow any responses to this entry through the RSS 2.0 feed. Both comments and pings are currently closed.