The Wire Troll: Garrett Cooper Could Help Down the Stretch 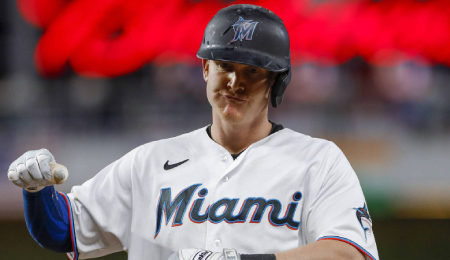 Welcome back to another week of Fantasy baseball. We’re on the season’s final stretch, so those still in contention must vigilantly watch the waiver wire.

This week, Ozzie Albies (foot) finally returned to active duty; four-time All-Star John Stearns passed away; and Julio Rodriguez continued to build his ROY case by becoming just the third rookie to ever record at least 25 homers and 25 steals.

Garrett Cooper, OF/1B, Miami Marlins (ESPN: 7.5 per cent; CBS: 23 per cent): Although he’s qualified at first base and outfield for some time, Cooper hasn’t seen any action as a flyhawk in two of the last three years. Still, that multi-position eligibility is an asset when combined with his solid gap power. Cooper is still not an everyday player, but he had another pair of hits Thursday as part of a big month so far (836 OPS) — a much needed development after slumping badly over the previous two months. The homers have turned into doubles in recent years, but this one-time top 20 prospect for the Marlins was touted for his extremely promising raw power (see video below for an example of his easy pop). Cooper is a huge dude who can also hit for BA, so this September spike is closer to the level he established between 2019 and 2021 before some regression this season.

Myles Straw, OF, Cleveland Guardians (ESPN: 22.7 per cent; CBS: 24 per cent): Like Cooper, Straw has seen more action than ever, enough that he actually ranks 31st in the majors in batted ball events with 406. Unfortunately, most of his results this season have been rather disappointing given the promise he showed last year. Still, Straw has been red hot of late, recording an RBI single with a run on Friday for hits in four straight (including a three hit performance on Thursday) and five of six to give him a .327 BA for September. Hell, this Punch and Judy hitter has even managed more than one extra-base knock this month!

Nick Maton, 2B/SS/OF, Philadelphia Phillies (ESPN: 1.1 per cent; CBS: 1 per cent): Maton may only be a part-time player, but he actually warrants some attention in very deep NL-only leagues if for no other reason than the pop he’s flashed this season. With another hit on Thursday, he’s now slugging .667 and has already managed nearly as many hits this month as he had in the entire month of August. In fact, Maton’s hitting suggests he deserves more action, and as recently as a few days ago, it seemed the Phillies agreed with that assessment. This bears watching.

Mike Soroka, SP, Atlanta Braves (ESPN: 6.5 per cent; CBS: NA): Soroka last pitched in the majors in early-August 2000, and hasn’t even been in our thoughts much for well over a year now. And even as he had a rough outing on Friday while working his way back from an Achilles injury, he’s now healthy enough that he’ll soon be rejoining the Braves. Bear in mind that Soroka may return as a reliever at first, but it’s important to remember how much better he was the season before he first got hurt (2019). It may not be long until he bags his first win since then, so consider him an NL-only option for now.

Yairo Munoz, 2B, Philadelphia Phillies (ESPN: unowned; CBS: unowned): Just over two years ago Munoz caught our eye and he hit well enough down the stretch to justify our faith. However, he barely saw any action for Boston last year before joining Philly in 2022. Munoz hasn’t seen much more PT this year (60 plate appearances) despite again making better contact, but he’s currently playing third base with Alec Bohm having to take over 1B for Rhys Hoskins, who had been finally healthy this year before hurting his hand recently. Munoz could be a sneaky, short-term DFS play.

Rich Hill, SP, Boston Red Sox (ESPN: 9.3 per cent; CBS: 12 per cent): As expected, the Mets acquired Hill at the trade deadline last year, and he pitched well, despite a poor record. This year — the launch of a third tour with the BoSox — has been a bigger struggle, but he’s still capable of solid outings like Sunday’s five shutout frames against the surprising O’s. If nothing else, Hill has done a better job of keeping the ball in the yard this season, so if you’re desperate for pitching help in a deep mixed league, give him a look.

Grayson Rodriguez, SP, Baltimore Orioles (ESPN: 3.1 per cent; CBS: NA): No. 13 on our Top 100 Prospects Rankings this spring, Rodriguez’s MLB debut seems imminent now that he’s finally healthy again. His command has been stellar, especially at Triple-A (84 Ks/15 BB in 61 IP), so we’re very intrigued about what he can do once the Orioles call him up.

Dynasty Option of the Week

Riley Thompson, SP, Chicago Cubs (ESPN: unowned; CBS: NA): Injuries and the pandemic caused Thompson to miss the last two seasons of his development, so small wonder he showed tons of rust to begin this season. The walks really need to be reduced, but given the control he showed in his previous season, he’s capable of addressing this. After a solid April, Thompson was rancid for the next months, but since July? Money! Yes, he’s been on a workload limit, but the promise he’s shown at the end of the schedule suggests he’s a prospect to watch closely heading into 2023 and beyond.

Canadian alt country band Cowboy Junkies soared to nearly immediate critical acclaim shortly after releasing their first album in 1986. From the sophomore effort that made them stars — The Trinity Session — here’s the a cappella leadoff track “Mining for Gold.”

By RotoRob
This entry was posted on Saturday, September 17th, 2022 at 3:11 pm and is filed under BASEBALL, RotoRob, The Wire Troll. You can follow any responses to this entry through the RSS 2.0 feed. Both comments and pings are currently closed.