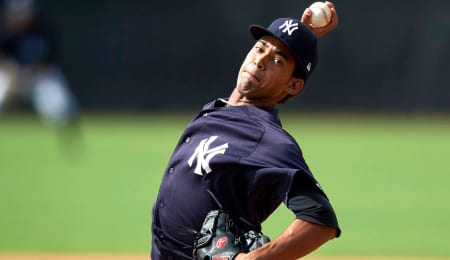 Deivi Garcia was very impressive in his debut. (Off the Bench Baseball)

Welcome back to another week of Fantasy baseball. We’re into September, and that means it’s the stretch run. Yes, we know that seems strange to comprehend, but everything about 2020 is strange. So just keep mining that wire.

This week, the Twins lost Max Kepler to the IL — his first ever trip to the list; Clayton Kershaw joined Don Sutton as the only Dodger hurlers to ever reach 2,500 career punch outs; and the game lost one of its all-time greats when Tom Seaver passed away on Monday.

Deivi Garcia, SP, New York Yankees (ESPN: 36.9 per cent; CBS: 40 per cent): No. 74 in our Top Prospects Rankings heading into the season, Garcia was someone we pegged as a rotation candidate this season, but it’s taken a bit longer than anticipated. Being mentored by Yankee catcher Erik Kratz, Garcia burst onto the scene last weekend, allowing just an unearned run over six frames in his MLB debut (see video below). Garcia showed an ability to deceive major league hitters, whiffing six to prove why he came into 2020 as the Yanks’ top pitching prospect. On Friday, he wasn’t nearly as effective, yet still piled up the Ks. Garcia’s curveball in particular is a serious weapon, so grab this kid now.

Josh Harrison, 2B, Washington Nationals (ESPN: 0.4 per cent; CBS: 1 per cent): Harrison is getting everyday PT in the outfield with both Adam Eaton and Juan Soto currently hurting. Batting sixth in the Nats’ lineup, Harrison has put together a modest three-game hit streak to jack his BA up to a robust .306 mark. In limited action, he’s shown much better extra-base sock than ever before, so take a look at this fan fave in deep NL-only leagues while he’s getting the reps.

Kyle Cody, SP/RP, Texas Rangers (ESPN: 0.9 per cent; CBS: 1 per cent): Okay, Cody wasn’t exactly mistake free in his first MLB start on Friday (his walk and errant pick off throw led to a run), yet he wound up giving up just one hit and an unearned run over three frames and still has a perfect ERA with a sweet 0.95 WHIP through four appearances. Cody’s wildness will likely haunt him, but he’s pitched around it so far — not bad for a dude that missed most of the last two seasons because of elbow woes and one that had never before pitched above High-A.

Brandon Belt, 1B, San Francisco Giants (ESPN: 22.2 per cent; CBS: 31 per cent): With Oracle Park being more hitter-friendly this year, Belt has taken advantage in a huge way, slashing another double and dinger (plus drawing a walk) on Friday to continue his scorching play. Since August 16, all he’s done is go 26-for-52 with 13 runs, eight doubles, a triple, five homers and 13 RBI. Seriously? Not bad for a guy that’s dealt with injury issues and was coming off his worst effort since he was a rookie. Belt’s speed seems to have dried up, but who the hell cares when he’s slashing .341/.429/.659? Over the years, we’ve seen him hint at the stardom that was projected after his magical 2010 minor league season; could it finally have arrived? Grab Belt in all formats to find out.

Josh Fleming, RP/SP, Tampa Bay Rays (ESPN: 23.5 per cent; CBS: 24 per cent): Fleming was not lights out on Friday, yet the soft tosser earned another win to move to 3-0 as the rookie continues to show he can eat up innings with his strong command. Don’t be expecting much in the way of whiffs, but Tampa Bay’s 2017 fifth round pick is proving he can get the job done in an MLB rotation, and that means a lot in 2020.

American R&B band Earth, Wind & Fire has been at it since 1969 and it still performing today. In 1974, the band released its fifth album, Open Our Eyes, and from this effort the first single was “Mighty, Mighty,” a tune that reached No. 4 on Billboard Hot Soul Songs chart.

By RotoRob
This entry was posted on Saturday, September 5th, 2020 at 1:59 pm and is filed under BASEBALL, RotoRob, The Wire Troll. You can follow any responses to this entry through the RSS 2.0 feed. You can skip to the end and leave a response. Pinging is currently not allowed.