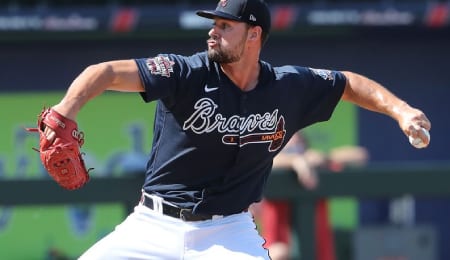 Welcome back to another week of Fantasy baseball. With the calendar switching to July, we have now officially reached the halfway point of the season. Keep scouring the wire, peeps.

This week, Vladimir Guerrero Jr. finished atop the All-Star voting board; Trevor Bauer has been placed on seven-day administrative leave while MLB investigates the sexual assault charges against him; and team owner Hal Steinbrenner says Manager Aaron Boone is not responsible for the Yankees’ struggles (which is generally the precursor to getting axed).

Kyle Muller, SP, Atlanta Braves (ESPN: 6.3 per cent; CBS: 24 per cent): It was nearly three years ago that we last pimped Muller as a Dynasty option and he soared that season, moving up from Class-A to Double-A, looking effective at each level. He racked up plenty of Ks at Double-A in 2019, making the move to Triple-A this season. Last month, he bounced back and forth between Gwinnett and Atlanta, looking extremely strong in his first two MLB starts (two hits and one run allowed with 12 Ks in nine innings). Muller’s role in the rotation now seems more secure with news that Mike Soroka is done for the season after again tearing his Achilles’. Muller will get his third start on Saturday against Miami — an extremely favourable matchup. Okay, so it’s a small sample size so far, but you have to be excited about his 11.7 K/9 rate as the tall lefty’s fastball is proving to be a real weapon. Control is still an issue, but we believe Muller needs to be owned in NL-only leagues and given strong consideration in standard sized mixed leagues. We’re also curious to see his work at the plate as he hit pretty well in the minors and could certainly rake in high school (see video below).

Paul Sewald, RP, Seattle Mariners (ESPN: 2.4 per cent; CBS: 2 per cent): There have been several Mariner relievers that have caught our eye at various times in the first half, and the relatively unknown Sewald is the latest after notching his first save on Thursday. He’s really found himself this year, posting an eye-catching 1.66 ERA through 21 appearances and 21 2/3 IP. Best of all, Sewald’s strikeout rate has soared to an amazing 43 per cent, leading to speculation that he could take over as the Seattle closer should the team move Kendall Graveman at the deadline. Oh, did we mention that Sewald has already racked up five wins after earning just one over four combined seasons with the Mets?

Zach Thompson, SP/RP, Miami Marlins (ESPN: 30.7 per cent; CBS: 47 per cent): When the White Sox originally drafted Thompson in the fifth round in 2014, we thought the pick was a bit of a reach. Well, the righty flamed out as a starter in the minors, shifting to the bullpen midway through 2017, where he found much more success. Now suddenly, the Marlins have turned Thompson back into a starter and all he’s done is put up a 1.50 ERA with 25 Ks (12.5 K/9) through four starts. His walk rate is up in the majors, but he’s yet to serve up a dinger so it hasn’t come back to bite him. Give Thompson a look if you need pitching help.

Senegalese singer Baaba Maal has been churning out Worldbeat numbers since 1989. In 1998, he released Nomad Soul, which included “Douwayra.”

By RotoRob
This entry was posted on Saturday, July 3rd, 2021 at 10:42 am and is filed under BASEBALL, RotoRob, The Wire Troll. You can follow any responses to this entry through the RSS 2.0 feed. Both comments and pings are currently closed.