The Wire Troll: Another Chance for Jarred Kelenic 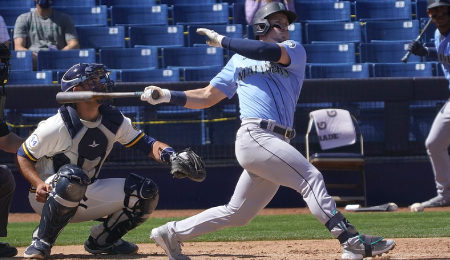 Welcome back to another week of Fantasy baseball. With just one full week remaining, this will be the final installment of our waiver wire recommendations for the 2022 season. We trust that our picks helped you win some hardware!

This week, Kolton Wong enjoyed his first career three-dinger showing as part of his best power season yet; Three-time All-Star Ronald Acuna Jr. (back) is hurting again; and Trey Mancini received a warm welcome in his return to B-More.

And now, let’s get to this season’s final batch of…

Jarred Kelenic, OF, Seattle Mariners (ESPN: 28 per cent; CBS: 29 per cent): Given his recent struggles, it’s easy to forget that Kelenic was our No. 1 prospect in 2021, graduating from our Top 100 Prospects rankings this spring. However, on Tuesday he earned his third recall to the Mariners, and really delivered on Thursday (2-for-3 with a double, homer, two RBI and a walk). He followed that up with another double on Friday. This buoys hopes for a big finish from Kelenic, especially now that Julio Rodriguez is on the IL with a back injury. Kelenic definitely has power, even if he’s not hitting the ball quite as hard as he did last year. Even so, if this still just 23-year-old kid can ever figure out a way to make better contact, his Triple-A numbers suggest he can be an across-the-board stud. Bear in mind that Kelenic’s hit tool graded at 65 just two years ago, making him a real post-hype sleeper.

Luis Rengifo, SS/2B/3B, Los Angeles Angels (ESPN: 24.1 per cent; CBS: 45 per cent): When David Fletcher got hurt in mid-May, we were excited about Rengifo’s prospects. Rengifo immediately made us look smart, hitting .290 in May, but he’s been inconsistent since. However, he’s been playing his best ball of the season this month and even showing some impressive power in the second half (10 homers since the start of August; .270 ISO over the last two weeks), including his first career multi-homer game (see video below). In seeing his most action ever, Rengifo has enjoyed a breakout of sorts and has a good chance to reach his 2022 ZIPS projection of 485 plate appearances.

Ji-hwan Bae, 2B/SS, Pittsburgh Pirates (ESPN: unowned: CBS: NA): It’s been a long — and sometimes troubled — road for Bae towards the majors, but the Pirates finally promoted him to the bigs for his debut on Friday (in which he delivered a hit and a walk). This Korean middle infielder definitely has speed and has proven he can hit at Triple-A (30 steals with a .289 BA). Still just 23, Bae is someone that deserves some Dynasty attention — especially if he can raise his HR/FB rate.

Domingo Acevedo, RP, Oakland Athletics (ESPN: 2.8 per cent; CBS: 7 per cent): Need some last-minute saves? With Dany Jimenez out, Acevedo seems to have emerged as the new fireman for the A’s, and his role has likely been solidified with news that Sam Moll is done for the season. Acevedo has bagged saves in four straight appearances, and has looked very sharp this month since a rough first appearance three weeks ago. He doesn’t strike out a ton of batters, but has managed to raise his K rate slightly this season. Still, saves are gold, so grab Acevedo for the final stretch.

Cody Morris, SP, Cleveland Guardians (ESPN: 3 per cent; CBS: 11 per cent): Morris enjoyed a breakthrough campaign in 2021 and carried that into this season, pushing his way to the majors and bagging his first MLB win on Friday, pitching very well around one poor frame. After a rough debut, he’s now given up one or fewer earned runs in each of his last four starts, and while his WHIP is less than ideal (1.45 ERA), he’s averaging nearly a K per inning and has really limited damage. Given the rate at which Morris is giving up line drives, his results have been rather fortunate so far, but he’s impossible to ignore if you need pitching help.

Tony Kemp, 2B/OF, Oakland Athletics (ESPN: 20.8 per cent; CBS: 20 per cent): We recommended Kemp in late-June last season and other than an ugly July, the pick turned out pretty well as he saw his most action ever. This year, he’s gotten even more burn, and while his overall results have regressed, he’s still been fairly productive (especially lately, with 11 RBI in 14 games heading into action on Friday). Kemp has picked up his play substantially of late, recording multiple hits in three of five games before taking an 0-for-3 on Friday. He’s not drawing as many walks as usual this month, but has more than compensated for that with his best offensive showing of the year (916 OPS). There’s no sugar coating the fact that Kemp hasn’t been as effective this season, but his recent run is helping justify the expanded role he’s received in 2022.

Late, great American trumpeter Miles Davis had perhaps a bigger impact on 20th Century jazz than any individual. From the 2014 compilation, All That Jazz, Vol 16: Miles Davis – Concierto de Aranjuez & Other Classics in Studio and on Stage comes “Django,” a song that’s been covered many times and was originally penned by John Lewis, a pioneer of the Cool Jazz scene in the 1950s.

By RotoRob
This entry was posted on Saturday, September 24th, 2022 at 3:08 pm and is filed under BASEBALL, RotoRob, The Wire Troll. You can follow any responses to this entry through the RSS 2.0 feed. Both comments and pings are currently closed.