The Wire Troll: Lane Thomas Heating Up for Nats 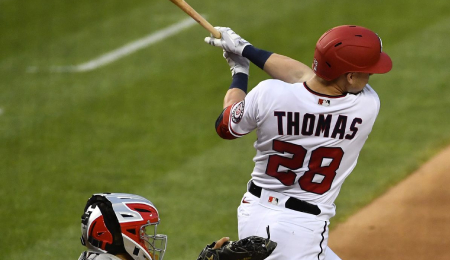 Welcome back to another week of Fantasy baseball. We’re nearly at the finish line now, so keep your foot on the gas and use the waiver wire if you can.

This week, Freddy Peralta landed on the IL thanks to more shoulder issues; Texas top prospect Josh Jung made his long-awaited MLB debut on Friday, wasting no time making an immediate impact; and Adam Wainwright teamed up with Yadier Molina to tie an MLB record with their 324th start as a battery.

Lane Thomas, OF, Washington Nationals (ESPN: 6.9 per cent; CBS: 21 per cent): While Thomas has failed to build on the tremendous promise he flashed last year, it’s still been a quite productive season, his first as a full-time player and one in which he’s finishing strong (just as he did last year — see video below). He’s hit safely in seven straight games (including a big game on Friday) and eight of nine this month to record a season-best 973 OPS so far in September. Unfortunately, the elite walk rate Thomas flashed last year seems like an outlier this season, but again, things are turning around now as he’s already drawn a half dozen free passes this month. A 2014 fifth round pick by Toronto, he wasn’t a hyped prospect in his draft year, but his blend of power and decent speed could help elevate him past projections as a fourth outfielder, and into a player that could provide a decent return on your Fantasy investment. If Thomas’s walk rate bounces back next season, consider him a sleeper in OBP leagues.

English Goth band Bauhaus formed in 1978 and remain active today despite taking a couple of breaks adding up to 16 years off. In 1989, it released the compilation album Swing the Heartache: The BBC Sessions, which included “Poison Pen.”

By RotoRob
This entry was posted on Saturday, September 10th, 2022 at 11:41 am and is filed under BASEBALL, RotoRob, The Wire Troll. You can follow any responses to this entry through the RSS 2.0 feed. Both comments and pings are currently closed.